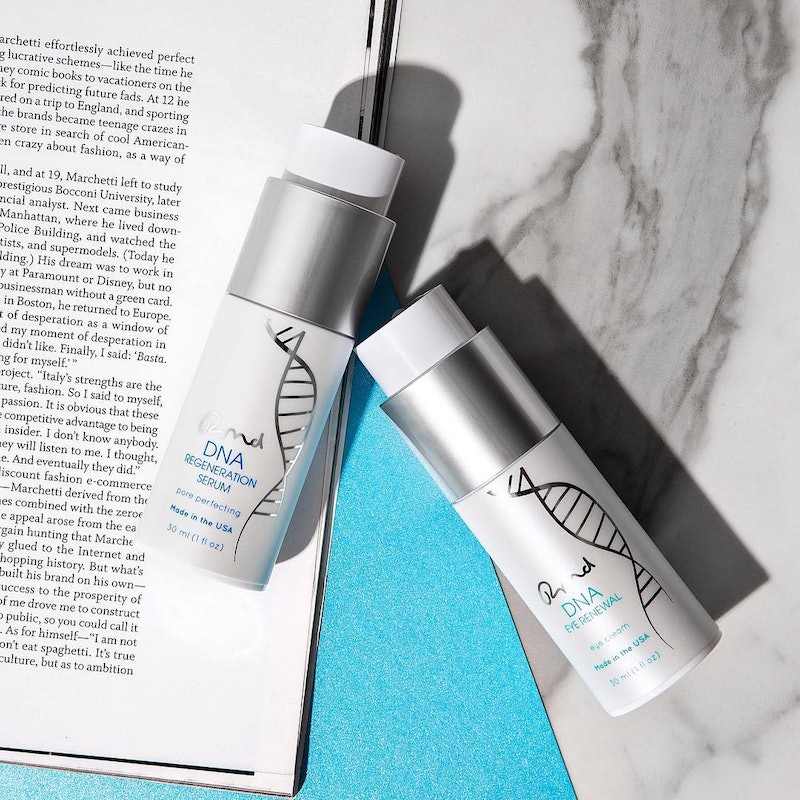 Ironically, the skincare industry's most beautifying ingredients rarely sound attractive: Words like "probiotics," "beta-hydroxy acids," and "Epidermal Growth Factor" don't necessarily roll off the tongue, you know? But that last one — EGF for short — is having a bit of a moment lately; and though its name may not be appealing, its skincare benefits certainly are. Dermatologists say EGF can stimulate collagen production, brighten hyperpigmentation, reduce under-eye bags, and get rid of wrinkles — so basically, it’s the fountain of youth.

Like collagen, Epidermal Growth Factor is a protein that naturally occurs in human skin. “EGF stimulates cells in the skin called fibroblasts, which produce collagen and elastin to thicken and tighten skin,” Dr. Ronald Moy, a board-certified dermatologist who works with skincare brand DNA Renewal, tells The Zoe Report. “The amount of EGF we're naturally born with decreases with age, which partly explains the thinning and loosening of the skin — because normal levels of EGF keep the skin thick, with plenty of collagen.” He notes that the scientists who discovered EGF won a Nobel Prize for their work… it’s that big of a deal.

Since EGF encourages the proliferation of cells, it’s a natural healing agent. “The benefits of EGF have been shown more in wound healing than anything else,” Dr. Loretta Ciraldo, a dermatologist and founder of Dr. Loretta Skincare, tells TZR. “But several companies use forms of this protein in anti-aging products, and studies show improvement in aging changes, including wrinkles and rough texture.” A separate study of Bioeffect EGF Serum showed “significantly improved brown spotting, skin texture, pore size, red spotting, and wrinkles versus baseline” with twice-daily application over a period of three months — which, honestly, is a pretty impressive list of youth-preserving results to see from a single product.

Alas, EGF isn’t all sunshine-and-roses. If you want to get in on EGF’s beauty benefits, you have to be down with how it’s sourced: from human foreskin cells. Yup. You may recall the famous “penis facial" from celebrity aesthetician Georgia Louise, which had a bit of a viral moment last year after it was revealed that her Hollywood EGF Facial — loved by stars like Cate Blanchett and Sandra Bullock — uses EGF harvested from (lab-grown) foreskin cells. Louise recently, uh, packaged the magic of her EGF treatment into freeze dried tablets for fans to use at home in tandem with a liquid “activator.”

The cult-favorite SkinMedica TNS Essential Serum also relies on neonatal foreskin fibroblasts for EGF, but the substance can be derived from placenta (as seen in Dear by Renée Skin Renewal Serum), bone marrow, and umbilical cord cells, as well.

Of course, this is 2019, and there’s a plant-based alternative for everything. Even foreskin. DNA Renewal uses a version of EGF made from barley to boost collagen and smooth skin’s texture. “Our plant-based EGF is human-like in that it is active, potent, and has been scientifically shown to improve acne scars, jowls, bruised arm skin, and even eye bags,” Dr. Moy says. The brand Bioeffect similarly uses a barley-based EGF, and as the previously cited study shows, it’s pretty powerful stuff. (Epidermal Growth Factor will appear on ingredient lists as “EGF,” “Growth Factor,” “Epidermal Growth Factor,” or “Sh-Oligopeptide-1” no matter how it’s sourced though — so if you’re dedicated to that plant-based life, do your research. TZR has outlined brands that use vegan EGF, below.)

Dermatologists maintain that there are no known side effects to using EGF topically, although the protein has been linked to tumor development inside the body. “It is well known that some cancers are caused by mutations in the EGF receptor, making them addicted to EGF, which results in uncontrolled cell growth,” Dr. Aanand Geria, a dermatologist with Geria Dermatology, tells The Zoe Report. “There are actually FDA-approved chemotherapy agents that work to block this receptor to prevent EGF from signaling.” To be clear, he says topical EGF has never been associated with the development of cancer — so basically, don’t eat your EGF products and you'll be fine.

Ahead, eight EGF serums, eye creams, and masks that are pretty much the foreskin — I mean, the fountain of youth.

"It acts as your collagen booster and should be incorporated in your skincare regimen as anti-aging, active ingredient," Dr. Moy says. This version uses plant-based EGF derived from barley.

"The EGF used in DNA Renewal's Eye Balm acts like human EGF, but is bioengineered from barley in Iceland," Dr. Moy explains. Studies show you can expect a slew of youth-preserving benefits from plant-based EGF, including fewer wrinkles and even skin tone.

If you want the results that Cate Blanchett and Sandra Bullock swear by, you can opt for aesthetician Georgia Louise's foreskin-packed packet of freeze dried tablets. Her new Pure Molecule system includes four weeks' worth of active ingredient capsules, plus liquid activators, to reset your skin. Epidermal Growth Factor comes into play during week three.

Per Joanna Vargas' site, the Twilight Face Mask relies on a form of EGF that *isn't* derived from human cells — so you can plump, smooth, and brighten with plants.

Looking for an effective, aesthetician-developed, vegan form of EGF? Stacked Skincare's got you covered.

Here, EGF is derived from what Dear by Renée's site calls "BioPlacenta," which "encourages the process of cellular renewal while boosting the vibrancy of collagen, elastin and hyaluronic acid in the epidermis."

Arguably the most famous EGF product, TNS Essential Serum is made with "neonatal fibroblasts" and has a dedicated cult following.

Skin Actives offers both vegan and non-vegan versions of its new Collagen Serum. This one is enhanced with plant-based Epidermal Growth Factor.