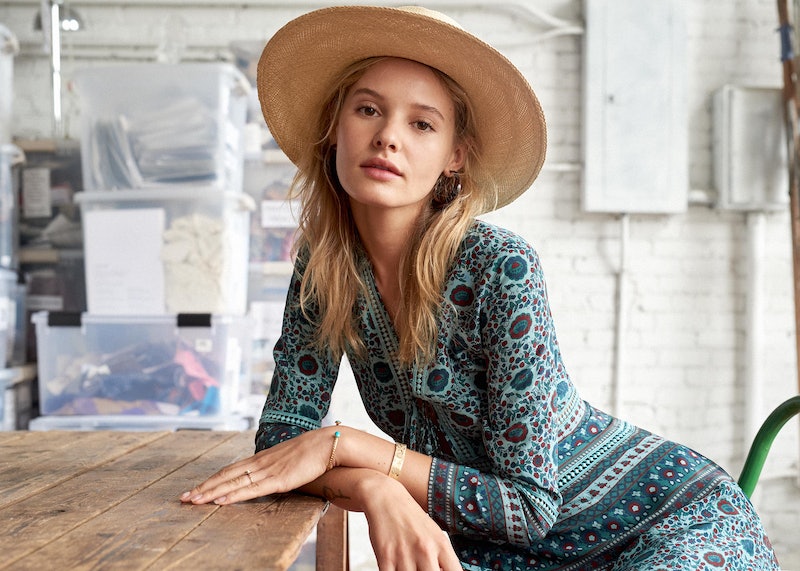 New York and Paris are cities with their own distinct styles, but with a little creativity, it's easy to bring the two together. Enter the genius new match-up launching Wednesday, Sept. 6: Cult French brand Sézane and Sea New York's fall collaboration, nine pieces that marry the viewpoints of the two brands. "We wanted to bring the New York’s street spirit to our feminine and timeless Parisian style," Morgane Sézalory, founder of Sézane, tells The Zoe Report via email. While finding a way to merge the classic, polished style of Paris with the bold trend-forward attitude of NYC may seem difficult, there's an effortlessness to the new collection — which includes blouses, trousers, dresses, and even a jumpsuit, all priced between $110 and $260 — that lends itself equally to a relaxed afternoon at the Louvre as it does one at the Met. (And hey, if you're nowhere near the Mona Lisa, it's a solid way to pretend you're right there).

The collection takes the romantic details unique to Sea — "I fell in love with [the brand's] embroidery and beautiful prints," Sézalory says of the 11-year-old brand — and reimagines them for the Sézane shopper, resulting in cool, easy pieces that still feel inherently polished. Key styles include a bohemian floral-printed maxi dress, silk trousers in subdued jewel tones, and a romantic eyelet top that would look just as good with cutoffs as it would layered with a delicate slip. The entire limited-edition collection is available on both Sea and Sézane's websites. But, there's one signature french item that wouldn't make the cut according to Paolini and Monahan, "We don’t see a lot berets around the city."

Instead, it's easy to envision styling the separates together, or with edgier NYC staples like a simple graphic tee, vintages jeans, or sneakers. "The women in New York express a freedom and strength in the way they dress and carry themselves," add Paolini and Monahan. "We try to develop pieces that women can use as tools to express themselves rather than overwhelm or label who they are."

The nexus of the capsule happened naturally, after Sézalory met Sea co-founders Monica Paolini and Sean Monahan in Paris. A mutual admiration led the designers to collaborate, eventually landing on the final nine-piece collection. Each item is inspired by and named for the eclectic neighborhoods of NYC. "Aesthetically, it was a seamless match," says Monahan. "The core of the capsule was developed around pieces that Sézalory has bought over the years from Sea. They were updated with her point of view and the result are pieces with a spirit, feeling, and look that is true to both the voice of Sézane and Sea." While you can't be in two places at once, thanks to the marrying of the two brands, you can sure dress that way.

Shop the collection below and embrace both the New Yorker and the Parisian in you — regardless of what city you call home.