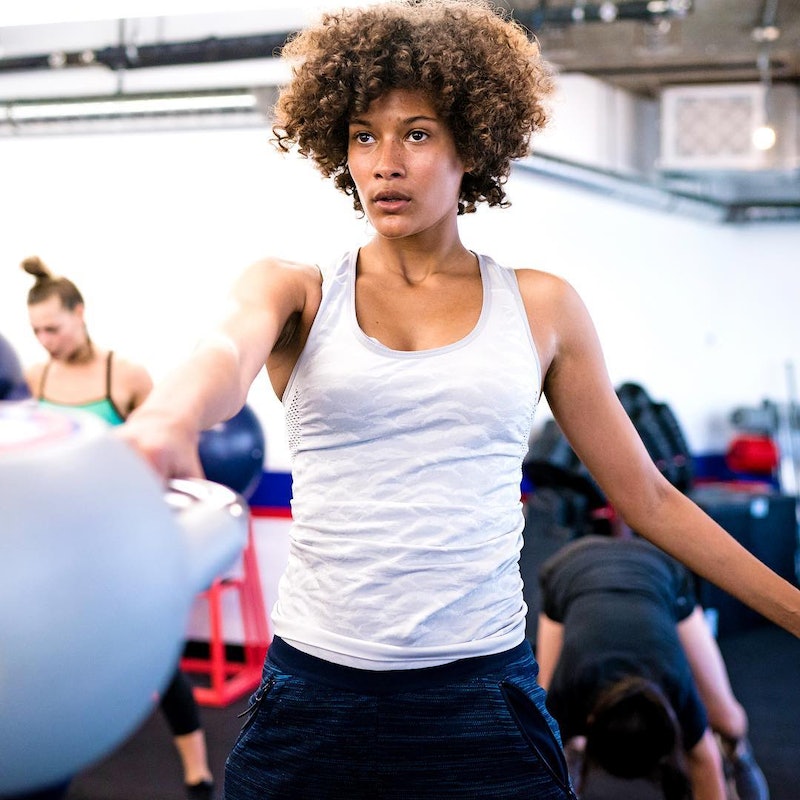 I’ve written at length this year about my health and fitness journey. From testing out buzzy new health supplements (like the daily apple cider vinegar shot that Jennifer Aniston swears by) to trying challenging new workout trends like boxing and the Lagree method. all were effective in igniting a new wellness fire in me. However, I continue to struggle with consistency. Enter the F45 Training challenge. Yes, I took on the viral workout program taking over the world as yet another attempt to get my health game on a steadily moving track — and the takeaways changed my views of fitness for good.

If F45 Training sounds familiar that’s because it is. The Australian-based group training class, which features 45-minute cardio and strength HIIT workouts, has amassed more than 1,750 classes around the world, making it the fastest-growing fitness franchise, according to Fast Company. So what’s all the fuss about, you ask? Well, for starters, the format of the classes leave little room for boredom. Workouts consist of 15-25 “stations” in which a member completes a one-minute (or shorter) exercise, while referring to a monitor that demonstrates how to execute said movements properly. The constant mobility, short time frame, and high-energy music blaring in the background makes it difficult to get bored or distracted. Your focus is always on the exercise you’re in and what’s next.

Now, in full transparency, my first visit to the F45 studio in West Hollywood, California was intimidating. I stepped into a single-room, filled with foreign fitness objects like dumbbells, exercise bikes, and — my arch nemesis — a pull-up bar. You’d think after my year of experimentation and challenges in the workout space, I wouldn’t scare easily. But the combination of rapid movement and transition, sweat-inducing intensity, and emphasis on upper-body strength-building (my Achilles heel) gave rise to a new fear and insecurity. Before, I’d always had one mountain or obstacle to conquer in the shape of a boxing bag, megaformer, or yoga mat. This time, I had several in multiple shapes and sizes.

Before I could race to the exit door, I was summoned to the floor to start the class (the one-hour Hollywood workout, which is accompanied by a live DJ). The instructors quickly briefed the class on each station’s movement as well as modifications for those who found them a bit too intense. After a quick warm-up, the dance commenced. The span of 60 minutes felt more like 15 as I raced through each movement and found myself intensely focused on getting it right since I had just a minute or less to get it right.

After the workout, my intimidation and insecurity was replaced with adrenaline. I felt proud of what I had just completed — and wanted more. I had been bitten by the F45 bug I had heard was indeed a thing and wanted to see what it could do for my body and overall health. That’s when I caught wind of the brand’s quarterly eight-week challenge which was about to commence. In addition to tracking your workouts and health stats for two months, the program also guides you through an eating plan that is meant to promote energy and healthier habits overall. I was game.

Weeks 1 to 3: The Initial Shock

Now, to be clear, my goal for this workout was not to lose weight. Rather, I hoped to get stronger and re-train myself to make working out and eating better a consistent part of my life, as I know the benefits that can have on my mental and physical health. So I went into this mainly with the expectation that I would at least be able to do a full pull-up and learn to love (or tolerate) broccoli.

According to Peter Pisani, F45's Global Performance Director, setting the bar too high for yourself on an intense fitness and nutritional plan can often set you up for failure — especially if you're doing a complete health overhaul. "It's not easy," Pisani says to The Zoe Report. "I think people often jump in and think 'I can do eight weeks' and then you start and realize it's two months of your life."

In this case, the two months requires regular workouts (I was told to aim for three to five classes a week by an instructor at my home studio in Venice, California). It also entails following a protein and nutrient-rich eating plan designed by F45's Nutritionist and Challenge Director Lyn Green (think: quinoa and chicken pilaf, superfood protein smoothies, and chicken salad cups). "The key focus should be on eliminating processed foods and emphasizing nutritious, whole foods like vegetables, fruits, lean proteins, and healthy fats," says Green to The Zoe Report.

For context, my working out routine prior to the challenge had dwindled down to once or twice a week and consisted of a boxing class, yoga, or quick outdoor run. My eating habits weren't terrible but, because of my busy scheduled, often boiled down to convenience (thank you, Uber Eats). Jumping headfirst into a commitment like this was a shock to my system, to say the least. Those first few weeks, I averaged about three workouts a week, and followed the eating plan laid out on my app about 50 percent of the time. (If there was a recipe that didn't thrill me, I swapped in one from my favorite clean eating blog, Clean Food Crush.)

While I didn't notice any drastic changes in those initial three weeks, I will say my sleeping improved. I found myself going to bed much quicker and easier, sleeping through the night, and waking up rested. This may seem like small potatoes, but it's actually quite a feat for me considering I'm an anxious and soften restless sleeper.

By my third week of the challenge I felt I really started to get a hang of the various workouts and literally felt my body adjusting more easily to them. The cardio-focused classes that first left me feeling depleted those initial two weeks or so were still challenging and sweat-inducing — but I was able to actually finish them strong and with residual energy for the rest of my day. The resistance-training workouts, which I initially dreaded, became my favorites. I actually got exhilarated from doing squats with dumbbells in hand — yes, I just said that.

I truly found my stride mid-challenge, gradually progressing from three to five workouts a week to five. While I was still lax on my eating plan, I tried my best to follow it at least three to four days out of the week to make healthy recipes and certain foods regular players in my diet. My increased fitness and decent eating made my energy levels spike, continued to improve my sleeping patterns, and helped decrease my anxiety and stress levels through the day (especially if I squeezed in a morning or mid-day session).

While this three-week glory period seemed to build constant momentum, it would unfortunately come to a halt thanks to the constant battle also known as life.

As the final two weeks of my challenge rolled around, my work and social schedule ramped up, making it difficult to keep up my five-a-week routine, and making healthy meal planning nearly impossible. I managed to sneak a post-workout protein shake in here and there and the occasional riced cauliflower bowl when I had a free afternoon at home. But, facts are facts — I fell off the wagon.

The decline was slow. I'd forget to sign up for a workout and find the ones I could swing were all filled up when I tried to opt-in last-minute. Laziness and compromise crept in, making me choose pizza and couch time over a workout. While I fully advocate for indulging here and there, I took things a bit too far and allowed myself to reverse a month of hard work and progress that made me feel better than I had in a long time.

Green agrees that indulgence and enjoying the sweeter and unhealthier things in life is fine when done mindfully and in moderation. "It is not essential to be perfect 100 percent of the time," says the nutritionist. "You can still achieve your goals while occasionally indulging in your favorite foods. We encourage challengers to choose healthy alternatives. For example, if a challenger is craving pizza, then we recommend having fewer slices and avoiding processed meats with lots of veggies. Or if you’re craving chocolate, choosing dark chocolate is a great alternative. You can also make a delicious raw treat from the challenge recipe library."

I'd like to say I heeded this advice but, alas, I didn't. I definitely phoned in those final two weeks of my challenge, which is something Pisani says is also a common thing amongst those new to the challenge (and an intense workout routine in general). The key here is to celebrate what you've accomplished. "You want to manage the process and give it your best efforts, but if you make it three or four weeks, feel great about the change and progress you've made," he says. "That’s something to be proud of and there's always another opportunity to jump back in again."

Fair enough. In addition to my sporadic progress and ol' college try, I will say I walked away from this eight-week experience stronger mentally and physically. I literally developed small but present biceps on my arms from all the upper-body training I endured. I also conquered my arch nemesis, the dreaded pull-up, and was actually able to complete one or two without the use of resistance bands to bounce me up over the bar.

Also relevant was the wealth of knowledge I learned about workouts and nutrition and how they indeed go hand in hand. Below, three of my major "aha!" moments:

I've been ignoring my core for years.

Over the years, I've taken plenty of workout classes that required variants of the same types of exercises: squats, planks, push-ups, etc. While I think I've taken to many of those techniques just fine, one thing became apparent to me during this eight-week program. For years, I focused more on getting my movements aesthetically right, and failed to engage the muscles that were meant to be worked and strengthened, particularly my core.

During my F45 resistance training sessions, my instructors noticed many of my movements were, well, sloppy and a bit all over the place. They pointed out my lack of engagement in my core and the muscles targeted in the specific movements. Activating your muscles and using correct form are not only key to progress but also help protect your body from injury.

Junk food and unhealthy eating shouldn't be a reward to working out.

Since college, I've subscribed to the belief that working out served as an excuse for unhealthy eating. If I had a strenuous cardio session or long hike, I "rewarded" myself with wine, fried food, and ice cream. While I fully advocate for balance and an indulgent treat here and there, I got myself into a dysfunctional approach to food and eating.

These types of challenges that include nutritional plans shouldn't be viewed as periods of deprivation, but opportunities to be more mindful about food. They should help us view meals as fuel for the day, which is what I came to understand throughout the program. Also, healthy post-workout meals or snacks are crucial and truly instrumental in your overall progress and health. "Supplement with a protein shake or BCAA blend before or after your workout to promote muscle recovery and growth," advises Green.

Be kind to yourself.

Pushing ourselves to a healthier lifestyle is all well and good, but obsessing or beating ourselves up over set-backs should be avoided. Celebrate and take pride in the accomplishments you make, whether that be working out two times a week or five. Any progress you make toward being better to your body — inside and out — is a positive.