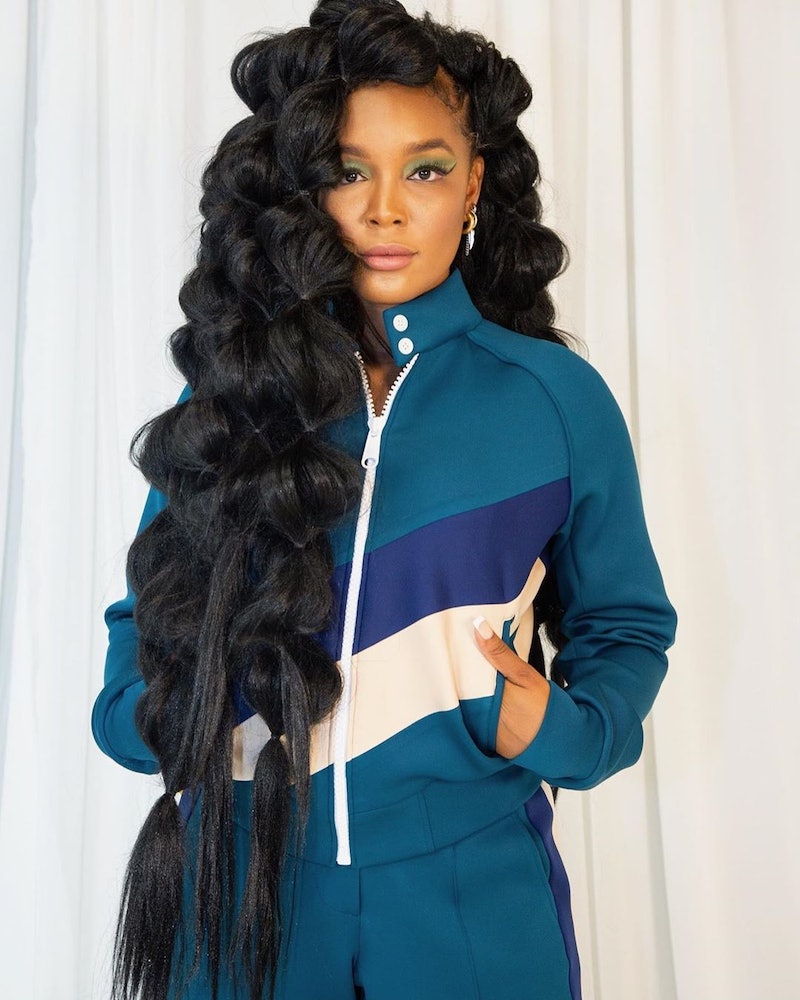 On Sept. 13, Harlem's Fashion Row brought the works of talented Black designers to the forefront for the 13th year in a row. Themed "Black Is The New Black," the annual awards ceremony and fashion show adopted a virtual approach in a socially distanced ceremony that honored the likes of fashion shape-shifters like Edward Enniful, Lindsay Peoples-Wagner, and Nate Hinton. When it came time for the showcase, the works of RichFresh, Kristian Loren, and Kimberly Goldson took center stage with designs that were full of color and character, wowing digital viewers. But the clothes weren't the only place we saw boldness on display: The bright eyeshadow looks created complemented the apparel masterfully.

For RichFresh, founded by designer Patrick Henry, model Brittany Hampton donned a lime green lid that included two shades. Lower on the lid, was a lighter shade that trailed far to the outer corners stopping just short of the ends of her brows. Above that hue was a slightly deeper green that followed the same path. For added drama, a bold black cat eye that followed. The look, created by Los Angeles makeup artist Kamaren Williams, was paired with an understated and natural complexion created using UOMA Beauty's Say What?! Foundation and a lip boasting a light flush of unlined matte color. "Fresh [Henry] himself was the catalyst for the makeup look," Williams says. "He wanted a jade-colored look which is how I came up with the eye, and I decided to make the liner the focal point because I knew it'd look great in addition to the hair and fashions."

To add to the already daring look, Los Angeles hairstylist Malika Palmer parted multiple sections in Hampton's hair to create various bubble ponytails. The look was executed with long regions of kanekalon braiding hair, secured with a rubber band every three to four inches and fluffed as desired. Once created, she styled the sections with one side pronounced to the front, and the other placed behind Hampton's ears.

Designer Kimberly Goldson, also chose to accentuate her dramatic designs with bright eyes. Monochromatic neon hues of pink and turquoise were applied in broad sweeps that draped the inner brow bone and trailed down to the under-eye area. Makeup artist Ke'Na Marcell created the looks that added yet another dimension to the multiple mediums and textures showcased on the runway. Focus was kept on the eyes as the two models wore little complexion makeup and flesh-colored lips.