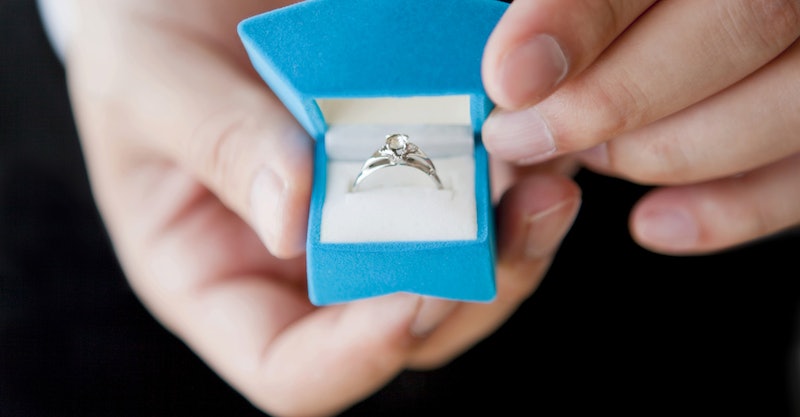 Have you started hearing wedding bells? It could be that it's naturally time to take your relationship to the next level — or it's the combo of new episodes of The Bachelor with Valentine's Day planning. Whatever your reasoning for dropping your partner hints (or going out to buy the ring yourself), a shadowy, often-ignored topic lurks around the corner: money, aka how much people who aren't on TV actually spend. Turns out, the average amount people spend on engagement rings may be more than you think.

And it's rising by the year. According to sales data shared by engagement ring and jewelry store Ritani, people spent an average of $6,324 on a single engagement ring in 2018. It's a noticeable increase from the $4,758 average reported in WeddingWire's 2015 Newlywed Report, and as you know, only a few years have passed.

So does this mean you should spend $6,000 on a wedding ring? Only you and your partner can decide that. But you can crunch a few numbers if you want to figure out how this data fits into the whole "three months salary" rule. The U.S. Census Bureau reported that the real median earnings of all male workers in 2017 was $44,408; for women, it was $31,610. Divide that by 12 and you have $3,700 and $2,634 per month, respectively

That means, according to the three-months rule, the average person should be spending upwards of $7,900 on a ring. So no, Ritani's data for 2018 shows that the average American in most states aren't following the rule — but ring costs are over halfway there.

Ritani also shared that some states' average ring costs in 2018 were way higher. Unsurprisingly, California wins: People spent an average of $9,809 per engagement ring. While you may think this means other states with infamously high-cost cities would follow after, unexpectedly, Minnesota is next; lovestruck Minnesotans spent an average of $9,063 per ring in 2018.

There is an inexpensive light at the end of this statistical tunnel, though. According to Ritani, approximately half of the 50 states spent less than average. Good news for your bank account, bad news if you wanted a firm number to keep in mind when shopping. Unfortunately, there's no hard and fast engagement ring-shopping rulebook — people in Mississippi spent just $2,793 per ring, the lowest number from Ritani's data. Just trust your gut; as the saying goes, style is priceless.