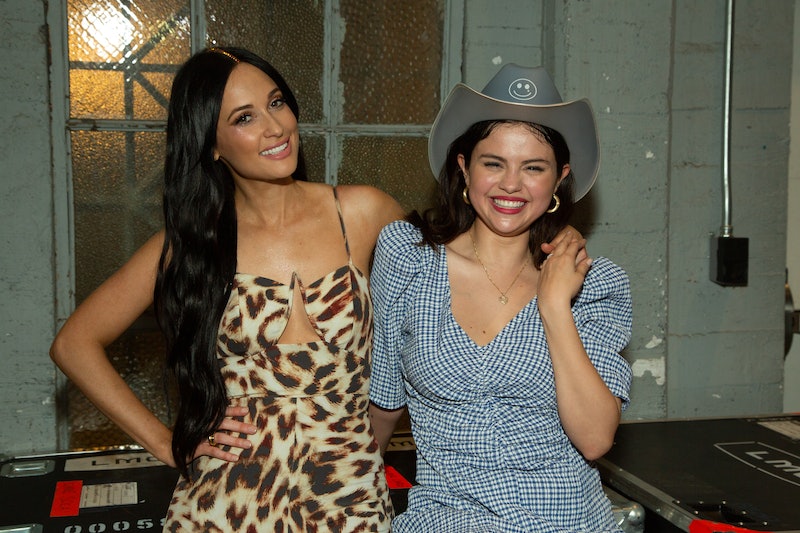 Has Halloween come early? is what you were most likely thinking when you scrolled past Selena Gomez wearing a cowboy hat and boots on Instagram. She may have been born in Texas, but it's unclear whether the singer has ever actually stepped foot on a ranch. She makes a good case for farm chic anyway.

The reason for Gomez's costumey look was a Kasey Musgraves concert. Photos of the singer and her girl gang showed the concertgoers in Western boots and cowboy hats surrounding Musgraves, who actually looked the least country during her Los Angeles show on Sun. night.

Gomez, in particular, made the pastoral theme seem especially chic. Her seersucker dress was adorned with the same blue gingham print that would adorn a picnic tablecloth (or the iconic dress that Dorothy wore in the Wizard of Oz, if you'd rather).

She paired it with suede pull-on boots with pointed toes and Western topstitching. Her slouchy white socks peeked out from over the shoes, which hit just above the ankle, so as to not overdo the country motif.

Gomez accessorized with a bright-yellow handbag and a Kasey Musgraves smiley-face emoji light-up hat from the merch stand, obviously.

She was the ultimate fangirl, seemingly unable to hide her eager grin while posing with the country musician. Her friends posted videos of her singing along to every one of Musgrave's songs, to the enjoyment of her loyal followers. Gomez, herself, posted a series of Instagram photos captioned "all kinds of magic" and "we laughed, cried and danced."

Seriously, nobody has done a one-off Western look better than the 27-year-old at this concert. Her checked dress — with slightly puffy shoulders, a gathered front, and box pleats — complemented those subtle cowboy boots so perfectly.

Lucky for all who envy the look, both pieces are still in stock. Gomez's farm-chic outfit and similar alternatives, ahead.

Puffy shoulders and a contemporary silhouette give this traditional style of dress a modern touch.

Gomez paired hers with these Western-inspired suede ankle booties.

It doesn't get any sweeter than this precious, fit-for-a-prairie dress.

Contrast topstitching and a square heel give these basic booties a cowboy feel.

Wear this mini dress with your casual sneakers, a pair of summery espadrilles, or your Western boots for a Gomez-inspired look.

If you're partial to a Western look, these tall cowboy boots are for you.