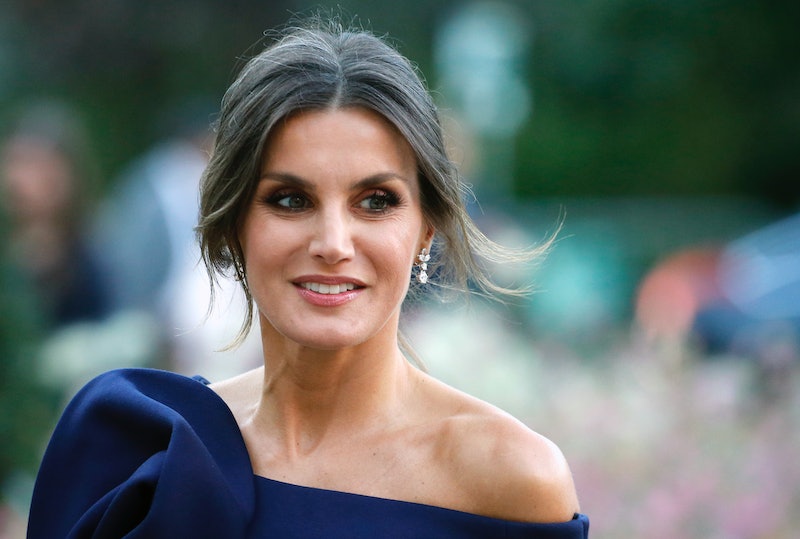 If you were to imagine what it would be like to shop a queen's closet, lavish silks, luscious tulle, and Elizabeth II's famous, ultra-vibrant suits might come to mind. On the contrary, budget-friendly items are the last thing one might associate with royal wardrobes, but Queen Letizia of Spain’s plaid pants are here to prove even monarchs aren't above a good bargain.

Suitably named the Prince of Wales Suit Trousers by Mango, the menswear-inspired staple is right in line with the queen's trend-savvy but refined sensibilities. Known to put a masterful modern twist on traditional wear, the 46-year-old is no stranger to affordable finds, always styling them in the most upscale, elegant way.

On Nov. 22, the former journalist attended the BBVA Integra Awards in Madrid, Spain, donning her go-to Hugo Boss coat and black-and-white colorblocked pumps. Letizia often reaches for experimental footwear, as seen by her favorite PVC strap heels, another accessible pick from Steven Madden. With dangly, pearlescent earrings, voluminous lashes, and a touch of lipgloss, the 46-year-old nailed the modern but timeless look, a home run for style and grace, the 2018 way.

Aside from the royal's effortless beauty approach and statement footwear, her aforementioned trousers really stole the show. The classic, checked pattern added a subtle detail to the otherwise simplistic look, and this isn't the first time she's opted for the business casual fall trend.

Nothing ties a look together like a great pair of patterned pants, and even though Letizia's particular style from Mango is sold out, there are a ton of styles to choose from in the same vein. Ahead, take your pick at similar options from the Spanish retailer that are fit for a queen, without breaking the bank.

Very similar to Queen Letizia's gay-checked trousers, this gingham style is a staple any office-ready wardrobe needs. Go all the way and grab the matching blazer while you're at it for a full-on power suit moment.

If you want to hint at athleisure without wearing an actual pair of track pants, try out these hybrid trousers with a vibrant, sporty stripe. You can easily offset the laid-back vibe with sleek, pointed sock boots.

Branch out and mix it up with this high-waisted, wide-leg option with thin-line detailing. The statement, trend-forward silhouette will look so polished with flats or crisp, white sneakers.

If you're looking for a pop of color to grab onlookers' attention, these straight-leg, striped trousers are just what the queen ordered. The touch of yellow and decorative buttons are anything but ordinary.

Get ready to make an ode to '90s style with these plaid pants with zipper detailing. You can juxtapose the edgy vibe with a pair of flats, or lean into grunge style with your favorite combat boots.