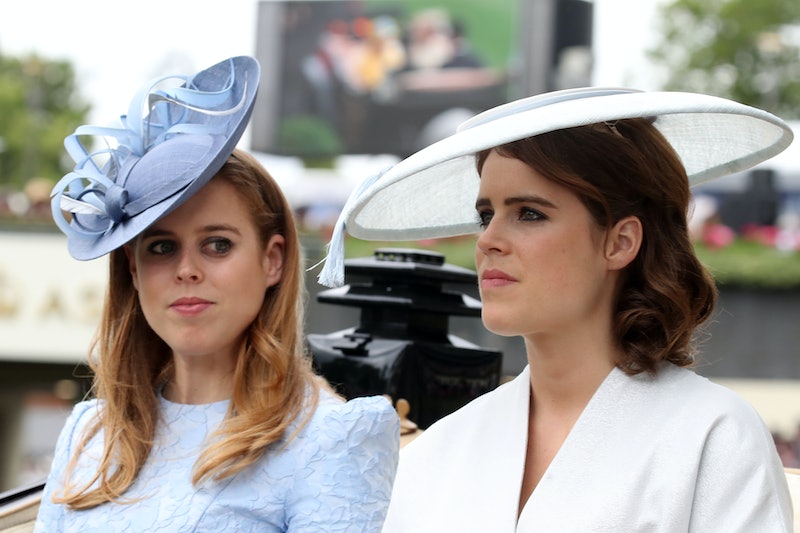 The emerging sheer trend has received an official stamp of approval from the royal family (or one of its stylish members, at least). The floral dress that Princess Eugenie wore to dinner on Tues. featured transparent chiffon on the neckline and sleeves. The subtle see-through detailing on her botanical midi is proof that sheer can be made elegant, too.

The princess wasn't in attendance at the Queen's Garden Party at Buckingham Palace, but she seemed to have gotten her flower fix anyway. Not only was she carrying a bouquet as she left George Restaurant in Mayfair, London, but her dress was adorned with allover pretty spring blooms, too.

The royals are on a full-on floral kick, which seemed to have started with the Erdem maxi Kate Middleton wore to the Chelsea Flower Show. Now, the Queen is wearing a bouquet-clad hat and floral-print dress and Princess Eugenie has reintroduced an old favorite.

A teal version of this Claudie Pierlot number is what she was wearing when she arrived at Windsor Castle the day before her wedding in Oct. 2018. The flouncy midi features chiffon blouson sleeves, a ruffled neckline that Eugenie tied together this time, and a frilly, asymmetric hem cut just below the knee.

The 29-year-old owns the dress in three different prints. Aside from the one she wore Tues. and the one she wore ahead of her wedding, she also wore another polka-dotted version to the Project 0 environmental campaign last summer.

So, basically, Princess Eugenie called the sheer trend before anyone else. Her sophisticated, totally unintimidating take on the latest craze proves that you don't really have to be a rule-breaker to wear it. A touch of chic sheer detailing isn't even enough to break royal protocol.

Cop the royal's look with these Princess Eugenie-inspired sheer pieces, ahead.

A sweet ruffled yoke and peasant sleeves give this floral dress even more of a feminine flair. Wear it to your garden parties or anywhere else this spring.

Tuck this lacy, polka-dot blouse into your everyday trousers for an elegant and professional-yet-trend-forward look.

Black lace detailing on the cuffs give this pleated, mock-neck blouse a touch of edge. Pair it with leather bottoms for a bold look.