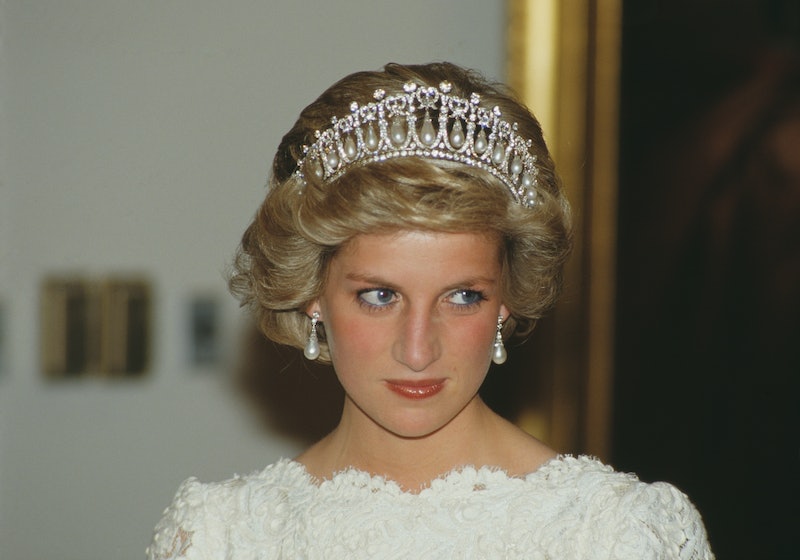 When you think of the late Princess Diana's iconic hair, it's safe to say an image of her shaggy pixie cut comes to mind. But, she didn't always don the look she's so associated with today. As Lady Di obsessives (or avid fans of The Crown) know, Diana Spencer married Prince Charles when she had just turned 20. Though she had longer hair when she was a teen, by the time she got married, she had a version of the style she kept throughout her marriage — a decade spent in the unrelenting public eye. Throughout the '80s, the Princess wore her hair primarily in the feathered variety with side-swept bangs that so instantly come to mind at the drop of her name.

Naturally, the level of public scrutiny Princess Diana's every move was subject to meant any hair changes had to be carefully considered. "Whatever I did to her hair became front page news,” her stylist, Richard Dalton, told Town & Country in 2018. “We had to be very careful. We had to do it one-fourth of an inch at a time over several weeks.”

Later in her life, star stylist Sam McKnight became the man behind her look and made some changes, which she famously referenced in the interviews that comprise the 2017 documentary Diana: In Her Own Words. When asked about turning points in her life in which she went from "victim to victor," Diana replied: "I suppose last summer when Sam cut my hair differently, it let out something quite different."

In McKnight's book, Hair By Sam McKnight, which came out in 2016, he reminisced on his time working with Diana, which started when he met her on a cover shoot for Vogue. He writes: "As she was leaving Diana asked, if I had free reign what would I do to her hair. I suggested cutting it short and she, to my surprise, agreed, and we did it there and then.”

Princess or not, any woman understands the power of a new haircut.

From the softer cuts and pushed-sideways-bangs of her 20s to the blunter cuts (and bangs) that sharpened her features as she came into her own as a beloved humanitarian (and no longer a woman married to a future King), these are some of Diana's most notable styles throughout her life.

The engagement announcement in February 1981.

Leaving the hospital with newborn Prince William in 1982.

Wearing the famous 'black sheep' sweater at a polo match in 1983.

Princess Diana, the Spencer family tiara atop her hair in Brisbane, Australia in 1983.

Leaving the hospital with longer hair and a newborn Prince Harry in 1984.

This just-above-the shoulder, pulled-back hair seen in 1984 is the longest her hair got during her adult life.

Diana at Highgrove House in July 1986.

The Princess kicked off the '90s with a shorter style.

At a banquet in Seoul, Diana wore shorter curls with the Spencer family tiara.

A slicked-back look for a trip to NYC—hair done for the occasion by McKnight.

Attending a performance of Swan Lake in London in 1997.