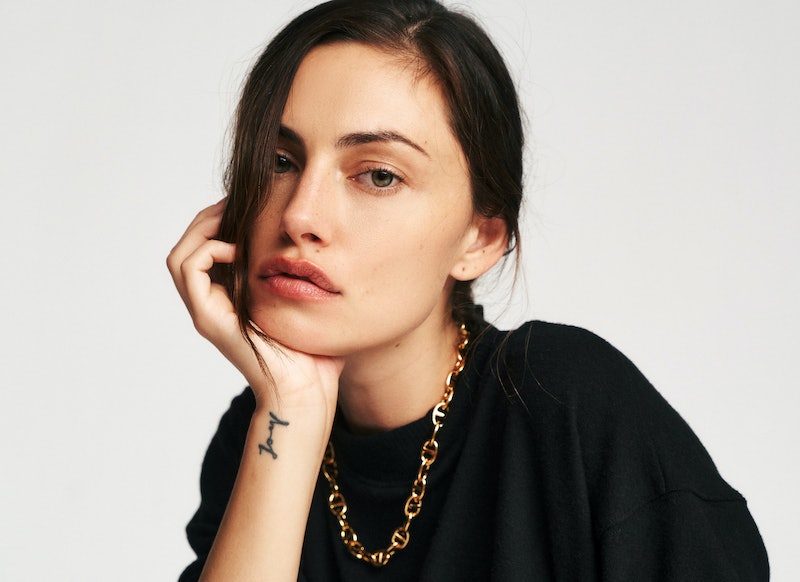 Back to basics. With three words and a single cliché we can encapsulate the collective feel around fashion these last six months. For Australian actor Phoebe Tonkin though, simplicity took an unusual turn — into a new business. Would starting a brand from scratch amidst an economic downturn be considered risky? Possibly. But LESJOUR!, Tonkin's tightly-edited loungewear line is the uniform that slides right into the sweet spot that so many women are currently seeking out for their own work from home uniforms: stylish, utilitarian comfort.

"We all have so much on our minds already, the idea of not really having to worry about how to put together an outfit in the morning was really appealing to me." Tonkin tells me over Zoom, tucked into a white-walled corner of her Los Angeles home, wearing a combination of cherry-red sweaters layered one over the other. "I was waking up in the morning and working from home, doing zoom calls, racing to the supermarket, coming home and watching Netflix." As she found herself changing from pajamas, to sweats, to different sweats throughout the day, she started to toy with the idea of creating an outfit that could hold up through her entire to-do list. "I always liked this idea of something that feels like sweatpants, but has the elegance of something that's a bit more tailored, like a suit set," she explains. Inspired by the '70s leisure suit, Tonkin wanted to create something that while relaxed, was still fashionable enough to transition from a day at the computer to something a bit more social.

"My style has really been the same for a very long time. It's always been a sweater, and jeans, and a sneaker or ballet flats," she explains. "What was easy about this process is that I knew exactly what I wanted this to be. I have been wearing cardigans since I was 11 years old ... I wanted a wider pant leg that was more cropped that could be appropriate with a pair of heels and the wide leg is great with sneakers."

The collection includes two pants silhouettes and four tops, all priced at $198, and all of which are meant to be mixed, matched, and layered. "We should be buying less and making smarter choices; I love the idea of a suit being the foundation for your personal style." This means, they're also meant to be accessorized, exemplified by Tonkin as she sweeps a black beret off of her table and onto her head. "Sometimes I wake up and I’m like 'I want to look like the girls from Euphoria today,'" she laughs. "Sometimes I want to look like a french girl, that’s what the beret is for."

For Tonkin, it was also important to create pieces that customers would hold onto, and that minimized environmental impact. "I was hesitant before now to start a clothing label because the idea of putting more waste into the world was something that I found a little hard to come to terms with, she says. "I knew if I was going to do something I had to find a really progressive fabric that was sustainable."

When I ask Tonkin whether it was difficult to source the right materials and kick off production in the midst of a global shutdown, she laughs, explaining that luckily, by keeping things simple, she was able to find exactly what she needed. Looking into eco-friendly fabrics like Tencel and hemp, she finally settles on EcoVera, a new textile that uses recycled viscose and wood pulp and has what she describes as a cashmere feel. Tonkin also chose a factory nearby to limit emissions from travel. "It's all knit in Los Angeles, it's five miles from my house. Everything is very contained and because all the pieces are in the same fabric, it's not like we’re sourcing something from Italy and then something from Australia and then coming here."

Like so many others, Tonkin began the pandemic trying out all the at-home hobbies, but now she's planning for the future, thinking not about things going back to the way they were, but how best to adapt to the uncertainty ahead. "My boyfriend is a musician so I was learning piano, having full music class days, and reading a lot, and then over the last few months I realized that this is more of a permanent thing than a temporary three month vacation where you learn a new language or how to make banana bread." She hopes that even after work transitions back from Zoom meetings, and friends can meet up again for drinks, that LESJOUR! can offer a new way to think about dressing down to dress up. "I haven't been to a party in so long, but eventually [there will be] a party that you can throw on high heels and really dress up something like this."

Shop pieces from her debut collection below.