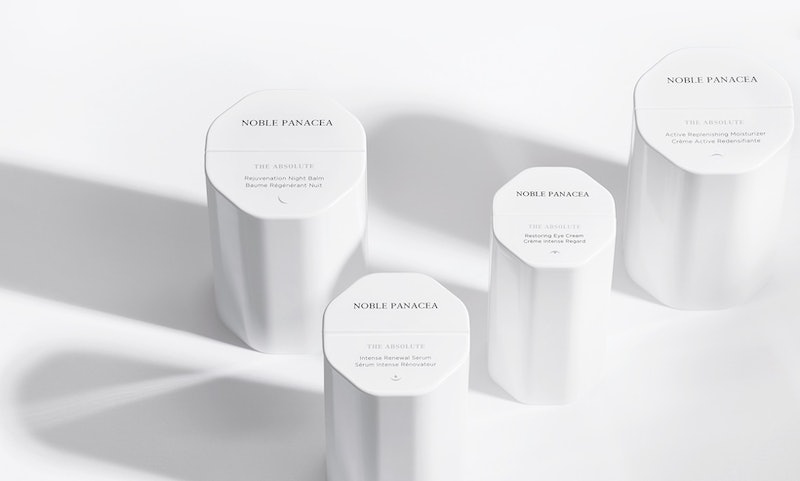 Not many beauty brands have their black-tie launch parties covered by Vogue. Then again, it's not every day that one integrates the work of a Nobel Laureate, either. New luxury skincare brand Noble Panacea has accomplished both feats — sitting squarely in a space almost completely its own as of its Oct. 23 debut. But before there was Noble Panacea, there was Sir Fraser Stoddart.

"Sir Fraser Stoddart won the Nobel Prize for Chemistry in 2016 for the design and synthesis of molecular machines. Imagine the smallest possible machine where the components are molecules and those components are able to move, relative to each other," Céline Talabaza, CEO of Noble Panacea, tells The Zoe Report in an email. "Sir Fraser has expanded our understanding of chemistry at the fundamental, molecular level — through his study of molecular machines, as well as several other important discoveries, including Organic Molecular Vessels which have been integrated into skin care by Noble Panacea."

Yes, really. Noble Panacea has debuted with two inaugural lineups, which you can pick up on the brand's website: The Brilliant Collection for youthful skin ($149 to $253) and The Absolute Collection for maturing skin ($239 to $420). "Sir Fraser continues to oversee one of the top chemistry labs in the world at Northwestern University. Although his priority is the mentorship of students and furthering scientific research, it was his dream to see one of his discoveries be implemented into a product that could impact so many," Talabaza continues.

And while this scientific approach can read like a chemistry paper, Noble Panacea's skincare products also feature ingredients that are easier to understand (and that you've probably tried before). "We use primarily natural ingredients, though supplement with synthetics when more effective — for example, retinol and certain peptides," Talabaza explains. "For the Brilliant Vibrant Eye Infusion, the gingko biloba extract acts as an antioxidant that also stimulates blood flow to brighten the eye area. Additionally, the Vibrant Eye Infusion incorporates red algae, which creates a protective shield, defending the skin from environmental aggressors and oxidative damage that can lead to premature aging of the skin."

You can explore all of the brand's products — and read more about its unique ingredients — on its website. Below, the four Noble Panacea products to keep your eye on.