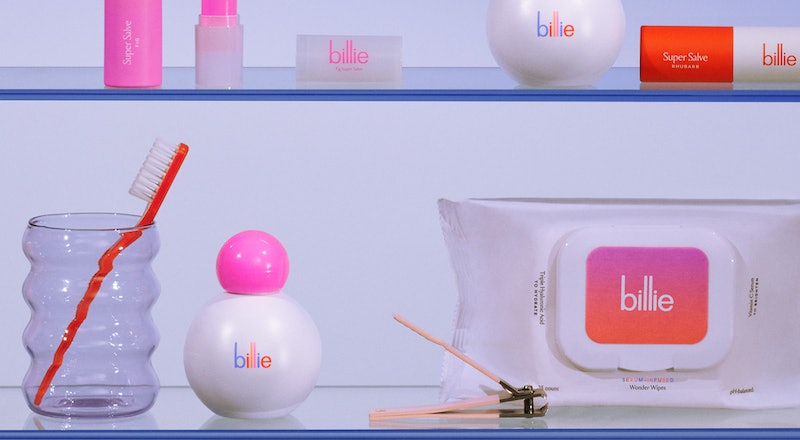 Although I was surprised when I first heard Billie was entering the beauty game — really, I shouldn't have been. Nothing is off the table for the Insta-famous, shaving-turned-beauty brand. "Anything in a woman’s routine is fair game for Billie," Georgina Gooley, Billie's co-founder, tells TZR over email. "We're excited to start to impact more than the shower through this new clean collection of everyday essentials that live on the shelf." And as one of the first to review Billie's new beauty collection, I was ready to give the three-piece drop a space in my own bathroom cabinet.

To kick off the expansion, the Mar. 17 collection includes Billie's brand-new Wonder Wipes, Super Salve lip balm, and Floof Dry Shampoo — which is sure to be a hit with shoppers. Not only is the $14 dry shampoo extremely Instagrammable, the two-shade range and subtle mica shimmer give the blendable formula a serious edge. The "Light" Floof has a medium-blonde tint, whereas the "Dark" Floof resembles milk-chocolate cocoa powder; pick whichever one works best with your roots.

But as someone with chronically chapped lips, I went straight for the $9 Super Salve lip balm. Billie sent all five new flavors my way: Classic, Parsley, Sorbet, Rhubarb, and Fig. While the scents themselves are light — I probably wouldn't have noticed a difference between them had I not been looking for it — the pigmentation sure isn't. Fig, a reddish plum, is by far the most dramatic, though Rhubarb's sheer classic red is fast-tracked to become a go-to for me. And as lip balms, they still deliver much-needed hydration.

I broke into Billie's $9 Wonder Wipes — described online as "an entire skincare routine in a single wipe" — on an evening when just thinking about my own three-step routine felt too exhausting. They already had a gold star in my book for being biodegradable, though I was equally impressed by how large they are (the oversized wipe made me think I accidentally pulled out two at once).

And I easily cleansed my entire face with one side of the wipe; no turn-over maneuver necessary. The light, dewy veil of sodium hyaluronate and botanical extracts it left behind was an added bonus.

Better yet, you can buy all three just-dropped launches straight from the direct-to-consumer brand's website. Ahead, the new Floof Dry Shampoo, Super Salve, and Wonder Wipes from Billie.