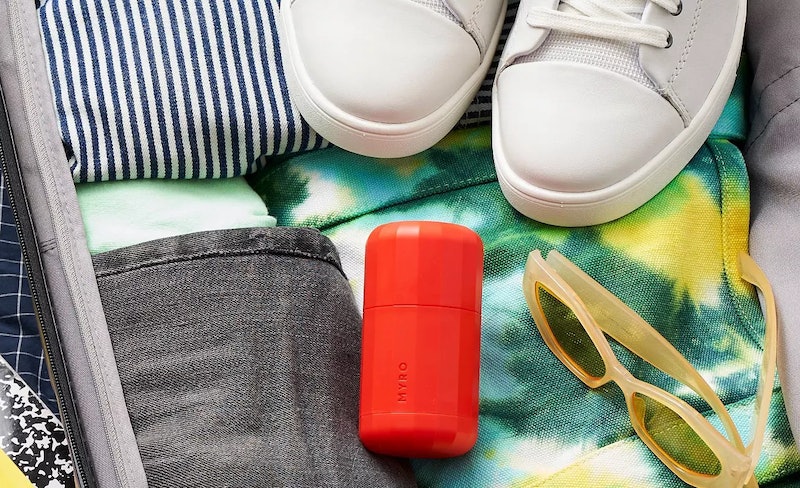 Myro's Founder and CEO Greg Laptevsky didn't know he'd have a cult phenomenon on his hands when he first launched the refillable, direct-to-consumer deodorant brand in 2018. "To this day, we've been surprised by the number of people excited to share #selfies and #shelfies of their Myro deodorant. Who would have thought that customers would be excited enough to share their deodorant in social media?" Laptevsky exclusively tells The Zoe Report over email. Yet, the brand has become a major player in the largely untapped market — and as of Sept. 15, Myro deodorant is available at Target.

A momentous occasion for any new brand, the news is especially sweet for the eco-conscious Myro. The brand's concept is simple: Buy an encased deodorant once. When it runs out, buy the minimally packaged deodorant refill (otherwise known as a "pod") — and insert it into your original container. Voila, your deodorant is good as new. "We were doing some back-of-the-envelope math the other day and if we can get 1 percent of Americans to switch to Myro, that's equivalent to eliminating over 100,000,000 plastic bags from the system," Laptevsky notes.

"In order to keep advancing our mission of reducing plastic waste, we knew we had to do things at scale to really make a difference. That's where Target comes in," he continues. "Our partnership with Target puts Myro's refillable system in front of millions of people in a traditional retail environment that makes the switch that much more accessible. We're excited about being able to make a bigger environmental impact by having more people reduce single-use plastic from their everyday routines."

Feeling like it may be time to switch up your deodorant routine? Below, all five Myro deodorants available at Target.