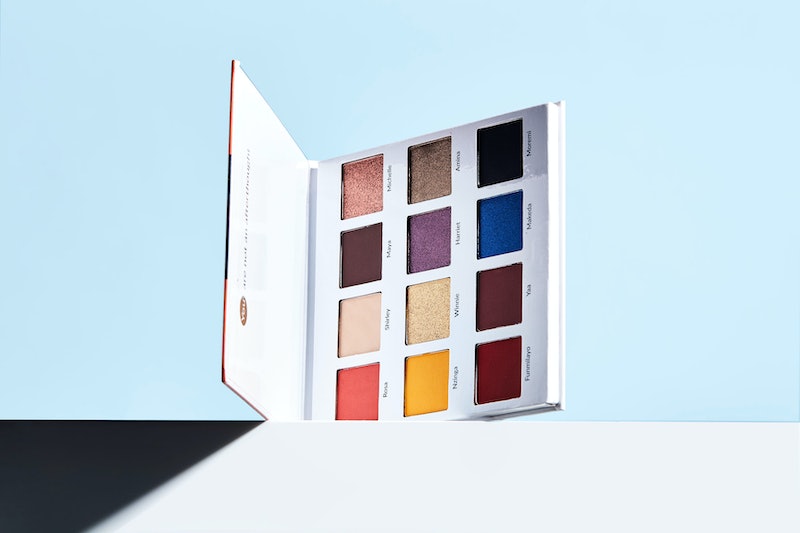 Eyeshadow palettes are usually about the colors, formulas, and trends they the support, and not much else. But occasionally a new drop will come along with an important message behind a fresh set of shades, giving more of a reason to make it a part of your daily routine. The most recent debut with a meaning that goes beyond makeup is the MFMG Cosmetics Power Palette, which celebrates Black women and continues the conversation about inclusivity — featuring hues as bold and brilliant as the women they were named after.

Packed with vibrant shades, the new palette features 12 vegan and paraben-free colors — six matte and six shimmer — and span a wide range of colors, including a bold blue, red, and yellow, and a handful of neutral shades, too. The colors were selected with the help of votes from MFMG's fans, but this wasn't the only part of the product followers were given a say in.

Through surveys and social media, fans ultimately decided who the eyeshadows should be named after, too, resulting in a roster of powerful, influential Black women. Many of the names are in honor of familiar heroes like Rosa Parks, Michelle Obama, Maya Angelou, Harriet Tubman, and Shirley Chisholm. Others are women who are equally as important, but whose names unfortunately haven't been as widely circulated in history classes or pop culture.

Women like Yaa Asantewaa, the Queen Mother of Ejisu in the Ashanti Empire who fought against colonialism; Moremi Ajasoro, a courageous queen who led the Yoruba people; and Funmilayo Ransome-Kuti, an activist who fought against colonialism and for women's rights in Nigeria, are just a few of those commemorated. The eyeshadows' titles recognize and celebrate these women who have changed history, whether it was through politics, writing, activism, or leadership.

The perfectly named shades are as powerful in their meaning as they are in color. Three of them come in playful primary hues, and the others lean more toward neutrals and silky jewel tones, with gold, taupe, black, wine red, and deep brown making up most of the pans.

The Power Palette is available exclusively on MFMG's website starting Aug. 17, and you can view its vibrant shades, below.