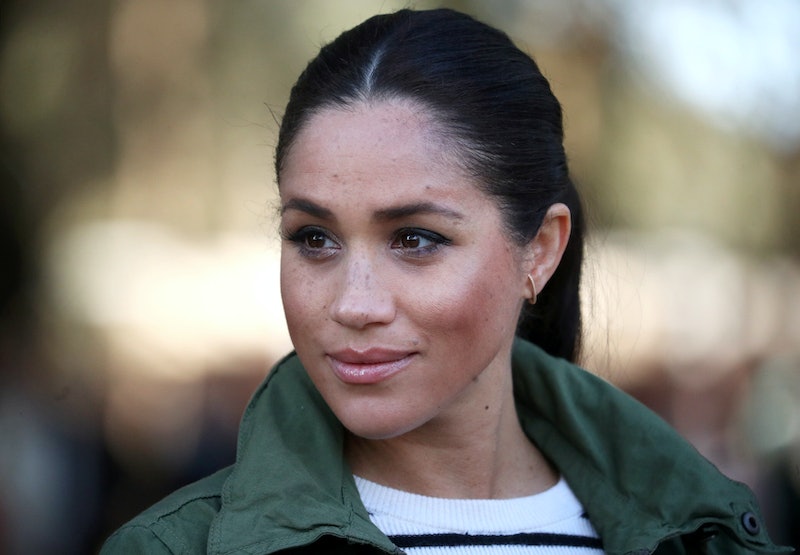 Everyone thought Meghan Markle would spend her final weeks of pregnancy tucked away in the English countryside, but anyone who knows anything about this royal mom-to-be knows she wouldn't dare leave her post in light of an international tragedy. The duchess made a surprise appearance at the New Zealand House on Tues. to pay tribute to those affected by the country's recent terror attack. The stud earrings Meghan Markle wore were a sentimental touch, too.

Her Royal Highness signed her name in the book of condolence at London's New Zealand House days after the terror attack in Christchurch. It's only been about five months since Markle herself visited the island during her first of many tours to come. Having just married into the royal family, she met with Prime Minister Jacinda Ardern, who gifted her a pair of special stud earrings to commemorate the significant trip.

These were the earrings Markle wore during her somber visit to the High Commission of New Zealand, which opened a condolence book to the public on Tues. She and Prince Harry were among the first to sign it, keeping the message sweet and simple: "Our deepest condolences ... We are with you."

Markle mourned in an all-black look, which consisted of an oversized coat thought to be custom Gucci and heels to match. It was the royal's tiny gold earrings, though, that made the biggest statement of all.

The dainty studs are adorned with engraved crossed feathers, a historic symbol of New Zealand's native Māori people and the unmistakable logo of the Kiwi jeweler who designed them, Boh Runga.

"In Māori mythology the Miromiro feather was a magic token of devotion that would bring loved ones back to you," the designer said in an Instagram post in July. And what a fitting message for such a somber event.

Rumor has it that Markle hit it off with New Zealand's Prime Minister during the visit in Oct. The duchess even invited Jacinda Ardern into Kensington Palace for a secret meeting in Jan. There, the royal thanked her Kiwi friend for welcoming her to the country on her first official royal tour.

Needless to say, Markle's 2018 visit to the Southern Hemisphere was a momentous occasion for the brand-new royal, and nothing could have held her back from paying respect to the country that hosted her first (not even maternity leave).