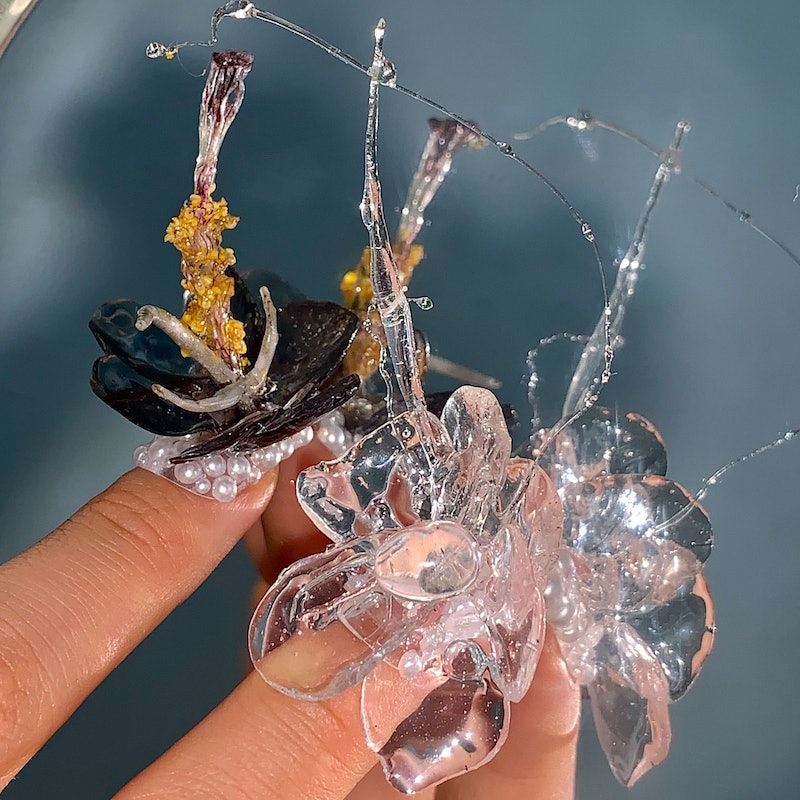 At first glance, you might not even consider the artistry of Sojin Oh — also known as Soji Nails — as nail art. And that’s kind of the point. The artist, who works with the likes of Lil Nas X, Rosalía, Kim Kardashian, Lil Miquela, Bebe Rexha, and Rina Sawayama may just single handedly be changing the world’s perception of nail art. Once categorized as simple accent nails or embellished with glitter, Oh turns the idea on its head and uses everything from glass to found objects in nature. The Seoul native, who is now based in Los Angeles, also creates abstract blob nails that are unlike anything else we’ve seen before.

“I wanted to take a break from the fashion industry so I went to beauty school for fun,” Oh tells TZR. “Friends started seeing my work and asked to do their nails.” Nature has always been at the core of her artistry, evident by the dried mushrooms and seashells to seaweed and moths hand-sculpted by the artist herself. “I’m inspired by the beauty of Mother Earth, so I decided to mimic little nature creatures on my nail bed using building gel,” Oh adds. “I always was fascinated by clear gel. I loved the organic look of it, so I started playing with it in class.”

“Nature trips, documentaries, books and nature instagram accounts,” are a few of the things Oh counts as the key inspiration behind her work. She's using this time to delve even deeper into the world of travel, digitally, which has had one of the biggest impacts on her aesthetic. “During COVID, I have been looking at more nature content on the internet, because there’s a limit to what I can get in Los Angeles in real life. I have been following people from Australia, Germany, New Zealand, and Iceland on Instagram to look at what kind of weird nature they have there.”

Some of her favorite unique materials she’s utilized are fungi on nails and nudibranch (a group of colorful soft-bodied, marine animals without shells) nails, which she hand-sculpts. “Other nail artists have been sending me their versions of them, too, which is cool,” Oh says. And of the nature-inspired rabbit hole she’s been falling down, her favorite accounts that have lent themselves to inspiration are @planet_fungi, which documents colorful, sculptural mushrooms, @waterbod focusing on strange and unseen underwater creatures of California and @fungiphotoholic, also a visual tribute to all different kinds of mushrooms.

Those kinds of stand-out, never-before-seen nails — in addition to other options such as fingertips peppered with oysters with pearls inside, or 3D glass sculpted flowers — are what has made Oh in high-demand in an editorial sense. She’s done the nail for a Bjork photoshoot, for Chloe x Halle’s "Forgive Me Now" video, and Bad Bunny’s "Dakiti" video.

The draw of her work, too, is the fact that she also does nails that are a bit more everyday, too, but in a fresh-feeling way. She’s the artist behind Kim Kardashian’s nails in her SKIMS campaigns, which range from extra-long French nails to blurred yet hyper realistic imitations of Kim’s face and body on each nail, which matched the minimalist, ‘90s vibe of the brand.

But for Oh, that also means pushing the gender boundaries too, and making nail art — particularly extensions — more commonplace for men. “I love how it makes people talk, even though it’s really not a big deal,” she explains. “I think it erodes gender lines and we need more of that in beauty. More people like Dennis Rodman, please!" Earlier this year, she decked out A$AP Ferg’s nails in colorful stars, and for Lil Nas X, she created silver chrome nails with a wet look.

Far beyond that, Oh is hoping to push the idea of nail art into new dimensions. Namely, edible nails and 3D printed nails, as well as more blob-like structures that defy the traditional look of nails as we know it.

With such a weird year, nail art and other extreme beauty treatments can feel, at times, a little irrelevant, but Oh’s work is the refreshing jolt the world needs. Unlike makeup, fragrance or even skincare, which all have come leaps and bounds in design possibilities and gender stereotypes, nails might just feel like the final frontier of beauty that really needs to be shaken up, and Oh shows that’s not only possible, but positively inspiring. “Beauty has so much healing power,” she says. “Some people need more than just a Burgundy mani set.”