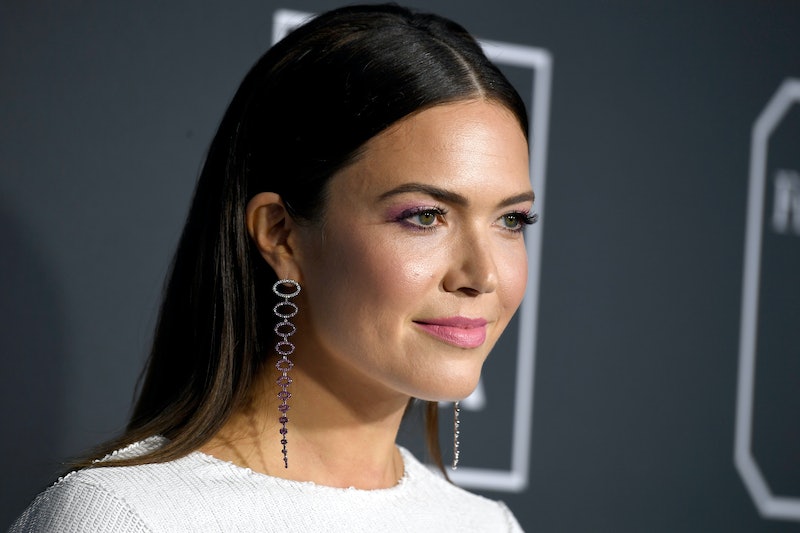 Yet another long-haired celeb has hopped aboard the bob train. Mandy Moore's bob haircut just gave a whole new meaning to spring cleaning. Disclaimer: this actor's latest makeover could make you say "out with the old and in with the new" during your next trip to the salon.

Like every other animal, humans have a tendency to shed their hair after a long winter, too. It's only natural to crave a lighter, more carefree style this time of year. Perhaps that was the inspiration behind Moore's fresh new cut.

Hairstylist Ashley Streicher — whose client roster also includes Sarah Paulson and Rachel Brosnahan — documented it all on Instagram, first tagging Moore in a cryptic photo of chopped hair on the ground, then posting an over-the-shoulder "sneak peek."

The big reveal officially came on Thurs., when Streicher posted the third and final photo in the series, which showed Moore in all her new-hair glory. According to a press release from Garnier, the This Is Us actor (who became a spokesperson for the brand in 2017) used the new Shade Selector Tool to find her perfect color first.

She reportedly went with Garnier Nutrisse Shade 53, a brunette hue slightly darker than her usual golden-brown. Then, to complement the dye job, she also got a not-so-subtle chop.

Moore opted for shoulder length and wore her new bob in loose, messy waves for the Instagram debut. Of course, she had plenty of fun with her long hair before cutting it short, wearing it in a sleek low pony at the Screen Actors Guild Awards in Jan.

But when that urge for a drastic cut strikes, there's only one thing to do. Irina Shayk, Emma Roberts, and Hailey Baldwin have all debuted short cuts within the past two months, too.

Itching for a lightweight bob like Moore's? According to Garnier, the actor's new choppy bob is so easy to recreate. After Streicher (a Garnier Consulting Hairstylist, herself) snipped the initial inches off of Moore's hair, she blew it out with a paddle brush for volume, then completed the cut dry.

Finally, she used a root-amping cream to create a tousled look and finished it off with an anti-humidity hairspray, the press release said.

Try the bob trend out for yourself and style it like Moore's with The Zoe Report's favorite bob-approved products, ahead.