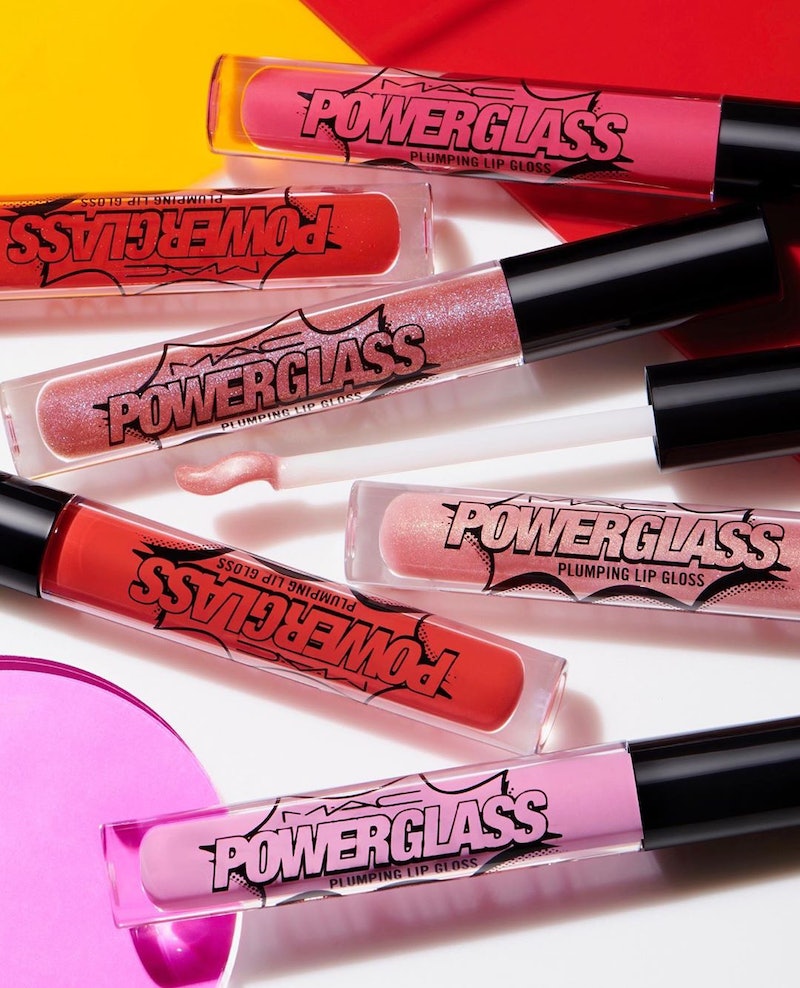 Lip gloss as a whole is a very polarizing type of makeup. While there's a portion of people who swear by it and never go without, many have labeled it as nothing more than a sticky mess. Glosses are historically known for their (unfortunate) abilities to trap unsuspecting hairs and leave their obvious mark on mugs, cups, and clothes. But the authority on lipstick knows this is less than ideal and reworked your stereotypical idea of a gloss into MAC Cosmetics' Powerglass collection, which may just change your mind about this product.

Released into the makeupverse in late June, the Powerglasses are lustrous glosses with lip-plumping abilities. They come in six different shades, each at $21, with shine that's meant to last for four hours. The entire line is inspired by comic books, which is easy to tell by the names and colors — all of which hint at the lip glosses' plumping powers and things superheroes from the '60s would say.

For there only being six shades, they range quite a bit in color. Pleased As Punch, a hot pink; Seriously Stoked, a neon orange; and Plump Up The Jam, a cherry red are serve as the punchiest hues of the collection. On the other end are Gee, That's Swell!, Comic Book Ending, and Can't Burst This Bubble — a spectrum of subdued pinks, some with sparkles.

But it's not just the colors that pack a punch; the glosses also add some zing to your lips, without burning them or leaving them dry. "Imagine Lipglass with superpowers! Powerglass perfectly, powerfully, potently, and patently plumps lips with a patented 'sweet sting' formula, which instantly gives more volume to lips as well as promotes volume over time," says Gregory Arlt, Director of Makeup Artistry at MAC in an email to The Zoe Report.

The brand settled on a mix of ginger, capsicum, and menthol crystals to plump your lips, but complemented it with a blend of hydrators, too. "It has a soothing, cooling complex and is filled with moisturizing ingredients like avocado and coconut oils and feels deliciously hydrating while having that high shine we love," says Arlt.

The combo is noteworthy, and TZR's Shopping News Editor Anna Buckman, who tested out the new products, found Powerglass to be substantially different from other glosses, saying that the sheer colors were perfectly tinted and showed no signs of being sticky. She also approved of the way MAC went about the plumping formula. "They're super cooling and tingly, but not in a painful way at all, which I've definitely experienced with other plumpers before," she says. No bee sting vibes here, just reflective, refreshing glosses.

Ahead, shop the full Powerglass collection.