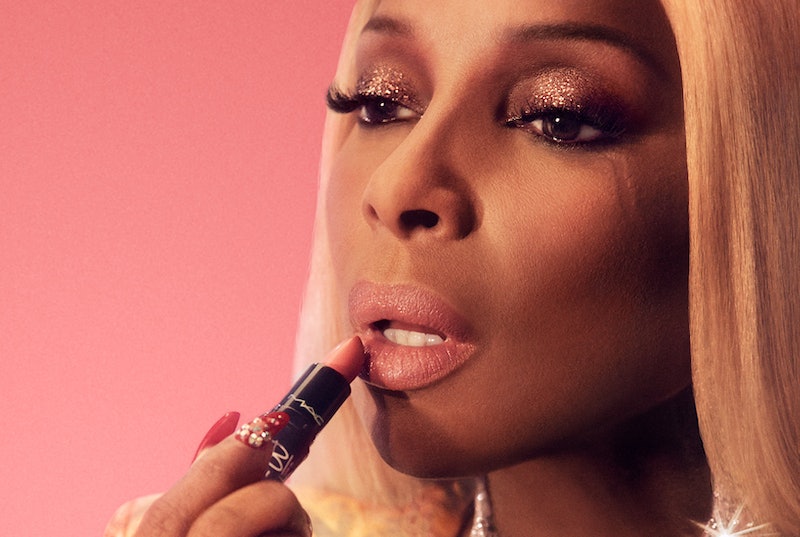 With decades of chart-topping hits to her name, you can pretty much count on there being a Mary J. Blige song for every occasion. But after MAC Cosmetics' Mary J. Blige Love Me Lipstick dropped June 23, you can now also thank the legendary musician for delivering a lipstick you'll want to wear every day — regardless of what this summer brings your way. (Though it'll be particularly appropriate if you just so happen to already have tickets to Blige's summer 2019 tour.)

The timing behind the collaboration is deeper than just the tour, or even Blige's BET Lifetime Achievement Award, which she received on June 23 as well. “MAC and I have always had a supportive relationship, and we’ve both always been vocal about the issues and beliefs that we stand by, including our similar, steadfast positions on inclusivity, diversity, and women’s empowerment,” reads a quote from Mary J. Blige herself in a press email. “I still remember the first time I was a VIVA GLAM ambassador in 2000 and then again in 2002. I chose to partner with VIVA GLAM because of its mission to bring awareness of HIV/AIDS in an altruistic way. This year marks a huge milestone of 25 years for both of us: For me, the 25th anniversary of My Life, and for MAC, the 25th anniversary of VIVA GLAM — so it was a great time to come together again.”

Naturally, the $19 pinkish-beige lipstick color — luxuriously named "French Silk" — is superstar approved. “I love a nude lip because it’s just effortless and it doesn’t fight with everything that’s going on,” Blige noted. Make sure you act fast if you fall in love with the neutral shade, too: MAC's website notes that "French Silk" is limited edition.

You'll have other chances to at least try the formula, though, if you do happen to miss out on the Blige-inspired shade. "French Silk" is just the first shade in MAC's upcoming Love Me Lipstick collection, a series of lightweight lip colors that claim to be as moisturizing as they are pigmented. Until then, shop the "French Silk" shade below; exclusively available on MacCosmetics.com.