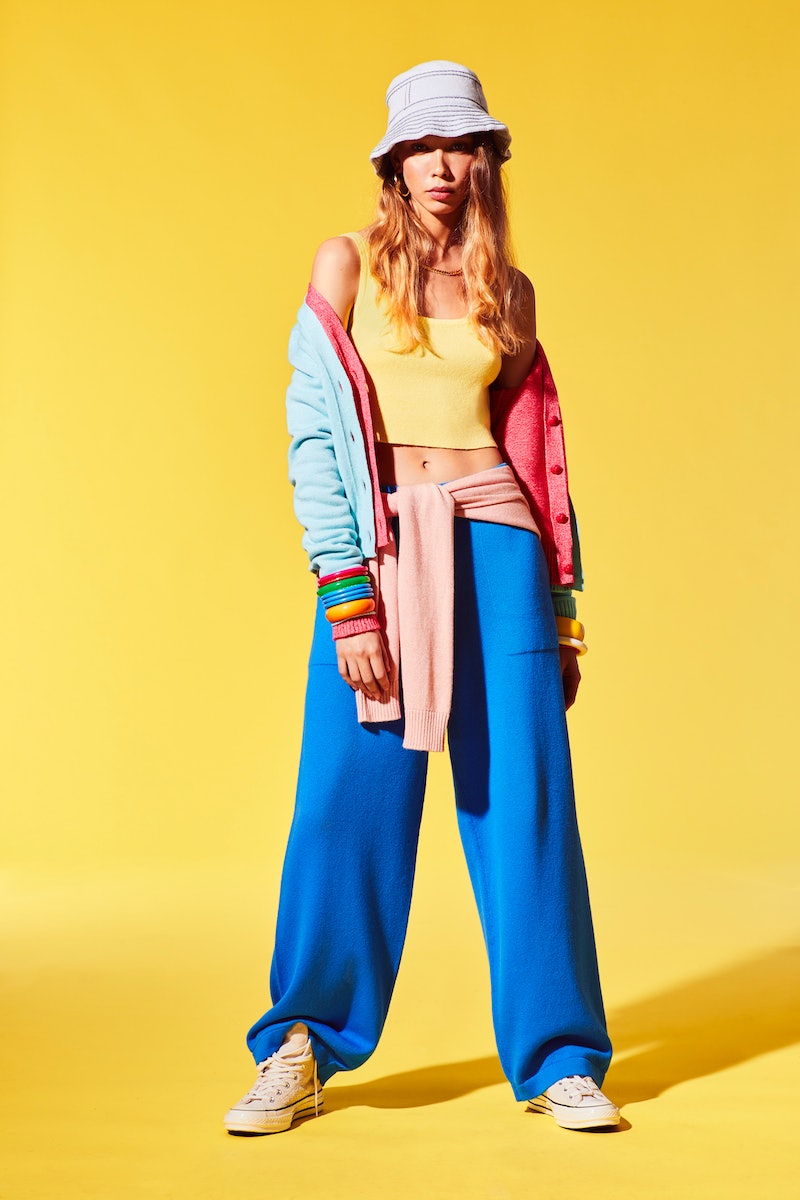 A cashmere sweater is a straightforward purchase. It's knitwear. It's soft. It's likely expensive. But, it's not so often that a wardrobe staple like your everyday sweater undergoes a complete transformation. And yet, luxury brand Barrie has done it in a way that seems entirely effortless. Barrie was founded in 1903, acquired by Chanel in 2012 (though it produced knitwear for the brand before), and led by creative director Augustin Dol-Maillot for the past two seasons. And now, Barrie's cashmere sweaters and separates are redefining knitwear altogether.

"I hadn’t specialized in knitwear before starting at Barrie, but I imagined it like a 3D printer," Dol-Maillot tells TZR. "Thinking about the architecture of a garment, its volumes, its cuts and its materials as a whole because they are all intrinsically connected." This unique approach has led the heritage brand down an unexpected path. One where "denim" jackets and bucket hats can be just as soft and luxurious as your go-to cardigan. Part of what has set Dol-Maillot's creations apart is the sense of illusion he's able to create; he uses luxe cashmere to create a jacket that looks entirely like the jean one in your closet, but is knitwear through and through. He's done similar reimagining of Hawaiian shirts, and suiting separates, creating an entire wardrobe from a material usually reserved for humble cardigans. And while tradition serves as the foundation of any heritage brand (a fact that isn't lost on Dol-Maillot), there is also space for innovation and reinvention. The garments are still created by hand through the ages-old craftways, but with an entirely new edge. With prices ranging from the low hundreds into the multi-thousands, the hours of detail and care required to produce the pieces are apparent. Though Barrie may not be a name you know just yet, it's a brand you'll want to keep an eye out for in the seasons to come.

Creative Director Dol-Maillot began his career at Chanel at just 16 years old, interning for three summers back to back. After earning a degree in graphic design, he eventually made his way back to the brand under Karl Lagerfeld. "I started out at Chanel, where I continue to work mainly on the prints and the sports accessories," he explains. In addition to his work at Chanel, Lagerfeld offered him the role as Barrie's creative director in 2018. "The two roles are complimentary and are very enriching. In the past I have also worked in the graphics domain, which has allowed me to have a complete vision and not just that of a fashion designer."

In his two seasons with the brand, Dol-Maillot has infused the design house with a youthful energy, one that nods to the sportswear and athleisure trends of today. "The T-shirt has replaced the shirt as a daily basic," he explains, emphasizing his modern take on fashion, where mixing together different styles is simply a part of dressing. He adds, "I wanted to enlarge the cashmere wardrobe to the max, play with it visually to push it beyond its traditional frontiers. That’s why I’m offering new combinations of materials, trompe-l’oeil, pieces in a wardrobe that are not normally made from cashmere, the perfect example being the pieces with a denim effect."

When Barrie was founded in 1903, it was originally a factory located in Hatwick Scotland. Today, pieces are still constructed by hand, utilizing the same traditional techniques including the weaving and dying of cashmere. As part of Chanel's Metiers d'Arts program, Barrie's heritage craftways are preserved and utilized (the producer was even celebrated during Chanel's 2012 Metiers d'Arts show, which took place at Linlithgow castle outside of Edinburgh). With the introduction of a development center at the factory in 2018, the brand is now finding new ways to mix the modern and the traditional. Add to that the fact that Chanel's recent moves to invest in green technologies, the future of the brand is one that marries the history of craft and the future of technology. "The technical feats are always pushing creativity ever further and vice-versa," explains Dol-Maillot. "Cashmere is a raw material: It’s up to us to highlight its infinite facets."

Below, shop a handful of Barrie's cashmere pieces: