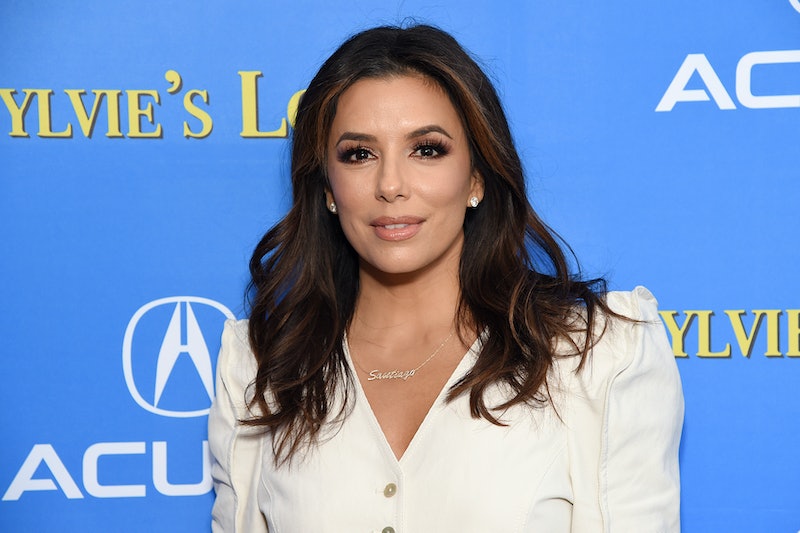 If you're in, or have ever been in, the business of covering outgrown roots, you know that means every four to six weeks you're making a trip to the salon — or, grabbing a box of at-home dye and spending, at minimum, an hour going through the process. And now, with quarantine in effect, touching up pesky roots (for all your Zoom meetings, obviously) is an even trickier task. But luckily, you can grab L'Oréal Paris' Magic Root Cover Up spray, a certified celeb-favorite, and have your roots covered in less time than it takes to apply mascara.

Take it from avid user, Eva Longoria, who posted an Instagram video on April 21 using the spray — which, bonus, is only $9.99 at Target — to completely cover her gray roots (until her next hair wash). Though the actor is a spokesperson for L'Oréal Paris, the video does not lie. Longoria first noted how she's been going gray for a while before showing the camera the stark contrast between her roots and chocolate brown hair. Then, after a few sprays of her "favorite solution," Magic Root Cover Up, and less than one minute later, all the gray was covered.

It doesn't look like she took a can of spray paint and doused it on her hair, either. Rather, the tapered nozzle provides precise application — without transferring color to her face or hands — while the lightweight formula (made without ammonia and peroxide) doesn't leave behind a sticky residue.

Longoria isn't the only celebrity who's waxed poetic about Magic Root Cover Up. Kelly Ripa (who isn't affiliated with L'Oréal) dedicated an entire part of her interview with New York Magazine in February 2020 to the product and its ability to flawlessly cover up her "Anderson Cooper gray" roots. "I have tried a lot of similar products before — like, every other one on the market — and take it from me, this one is the best," said Ripa. "The spray requires little effort, looks good, and is so fast: Spray it on the parts you need, and you’re done."

Aside from celebrity endorsements (which also include former Real Housewife Tamra Judge and Mariam Ezzeddine, aka Cookin' With Mima, a chef with over two million followers on Instagram), Magic Root Cover Up has over 1,500 five-star reviews on L'Oréal Paris' site.

Pick up one of the eight offered colors — four brown, two blonde, one red, and one black — at most drugstores or online to save you the trip. Below, Magic Root Cover Up.