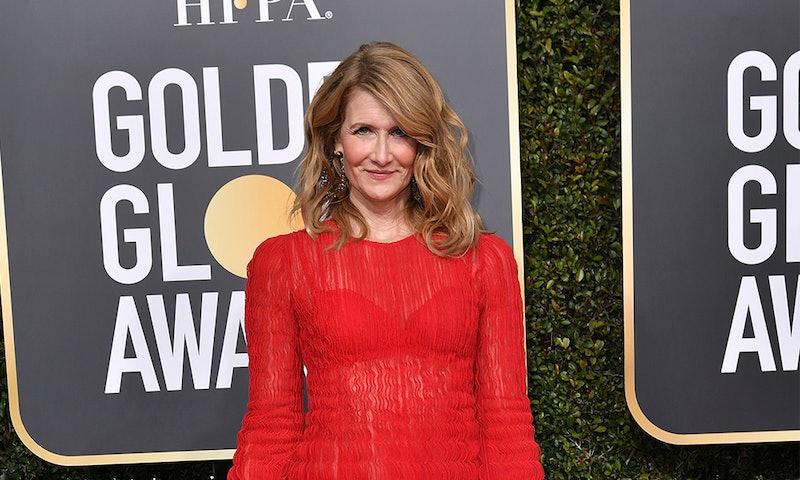 It's no secret that one of the best parts about award show season is recreating your favorite beauty looks from the red carpet. And while the majority of celebrities opt for ultra-luxe, high-end products, there's always a handful of red-carpet moments that were created with a drugstore find. Case in point: Laura Dern's hair at the 2019 Golden Globes called on a $5 product — and her hairstylist used it in the most brilliant way.

Dern, whose role in The Tale snagged her a nomination for Best Performance by an Actress in a Mini-series or Motion Picture Made for Television, collaborated with celebrity stylist Creighton Bowman for Sun. evening's beauty. Bowman looked towards a handful of Dove products to create Dern's perfectly lived-in waves, but it was his use of the brand's Invisible Dry Shampoo that took the actor's look to the next level.

Though dry shampoo is probably already a part of your hair routine, you likely look towards the oil-zapping formula to refresh your look in between washes. Surprisingly, Bowman used dry shampoo as the final touch when styling Dern.

"To finish, I used a combination of Dove Care Between Washes Invisible Dry Shampoo and Dove Style+Care Compressed Micro Mist Extra Hold Hairspray to seal in the lived in-look and make sure it [lasted] all night," Bowman shared with The Zoe Report. The stylist says those with thin hair types can use a spritz of dry shampoo as the first step in any Dern-inspired routine, and those with thicker hair can use it last.

Bowman says the actor's piece-y waves added an edgy feel to Dern's entire look. "The dress is classic Valentino and an homage to Italian renaissance," he explained. "We wanted the hair to be edgy and lived in."

Using a wide-tooth comb, Bowman began by working a generous amount of mousse through Dern's towel-dried hair. He then blew out the actor's hair with a medium-sized round brush, focusing on body and bounce.

Before grabbing his 1-inch curling iron, Bowman parted Dern's hair into four sections (front and back, and on either side of her ears), spraying each piece with Dove's shine-enhancing heat protectant. To get a tousled look, he waved Dern's hair in different directions, finishing off by running a flat iron through large sections of her hair (focusing on the ends) to give the illusion of imperfect, lived-in texture.

Whether you're ready to recreate Dern's waves or not, you can take cues from Bowman by using your dry shampoo in a new and innovative way. Ahead, shop the exact formula Bowman used on Dern, and prepare to have your style last all day (or night) long.