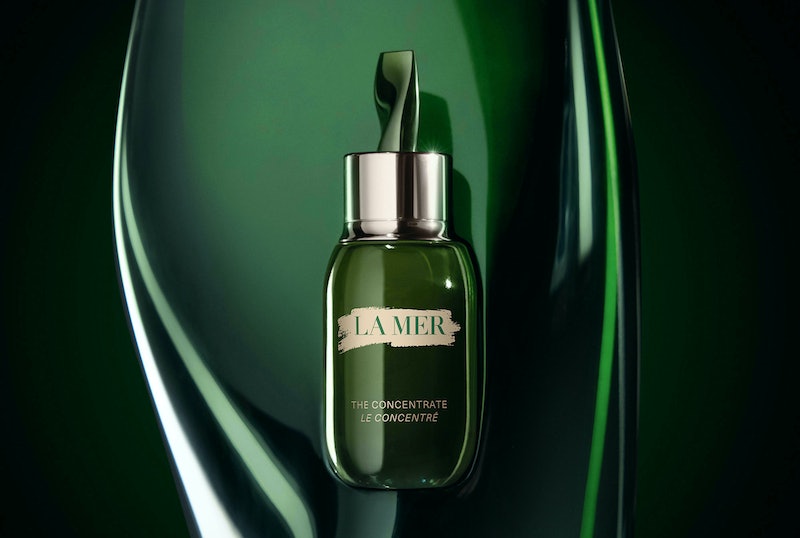 Chrissy Teigen paraded her impossibly glowy complexion around for long enough before doing the public service of broadcasting her million-dollar skincare regime to the social media ether. Predictably, the big reveal included La Mer's Crème de la Mer and The Concentrate, a celebrity-touted barrier serum which just got a very timely update.

The brand's luxe pollution defense potion is a longtime A-lister favorite, cherished by the likes of Emma Stone, Sienna Miller, and Catherine Zeta-Jones, so it's no surprise the model credits it — among an iS Clinical cleanser, Control Corrective SPF, and Bioré chin and nose strips — for her extraordinarily well-behaved skin.

Not a month after she shouted it out on Instagram, La Mer introduced a new and improved version of The Concentrate that, according to the brand, includes even more antioxidant power thanks to the addition of lime tea concentrate. La Mer calls the ingredient an "antioxidant powerhouse" for its ability to shield against free radicals (you know, the little nasties left behind by environmental stressors).

The cult-classic elixir has undergone other renovations over the years, each time apparently amassing a larger following, but has stayed true to its trusty core formula (namely the anti-inflammatory Miracle Broth that La Mer launched with in 1965).

The brand goes as far as to call it a miracle worker, able to halt aging, deflect against irritants, strengthen the skin's natural barrier, soothe after exposure to extreme temperatures, and — as a bonus — stand in as a pseudo primer for smooth foundation application. That being said, this so-called miracle worker comes at a price.

With the serum costing $200 and a 2-ounce bottle of Crème de la Mer costing $335, Teigen's La Mer duo is worth at least half a grand. "$$, I know I know but I gotta be honest," she wrote. If your wallet will allow it, you can try the iconic combination yourself with the new Concentrate, ahead.