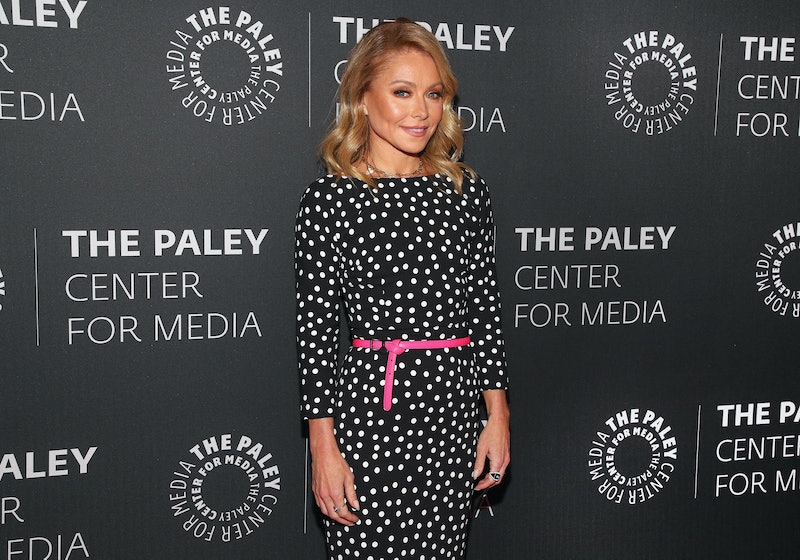 It's time to put down the craft scissors. According to Kelly Ripa, anyone currently playing a game of will-they-or-won't-they with potential bangs while self-isolating should take a look at the star's own DIY style from days gone by — specifically, Kelly Ripa's bangs in the '90s. On the March 24 episode of Live with Kelly and Ryan, the talk show host discussed the downsides of people taking it upon themselves to cut their own hair while home during the coranavirus pandemic.

"They're calling it a 'pandemic trend'. I'm not sure if I like the phrase 'pandemic trend', but they're saying since this has taken hold of us and we've all been trapped inside with each other, people are cutting their hair out of boredom," Ripa said. Then, shaking her finger, she continued: "People don't cut their hair out of boredom. They cut their hair because they're drunk and they think they know how to cut hair."

And yes, this all circles back to Ripa's own '90s style. “I know from where I speak,” the star added. “I cut my bangs right before the Daytime Emmys about 22 years ago and I’ve never gotten over it." (As reported by InStyle, Ripa's pre-award show cut probably took place in 1999 — so, 21 years ago.)

Yes, the very same Daytime Emmy Awards where Ripa stunned in a sheer beaded gown. The star has looked back at that dress since then, too, sharing a throwback photo on Instagram in May of 2019. "Here’s how the convo went. ME: is this dress see through? HIM: no. ME: are you sure? You’re not even looking! HIM: let’s go we’re going to be late. ME: but.... HIM: elevators here," Ripa captioned the picture.

Though, honestly? The star's 1999 dress-and-bang combo wouldn't look out of place on a red carpet now — and no one there probably guessed that Ripa's glamorous updo had been taken into her own hands.