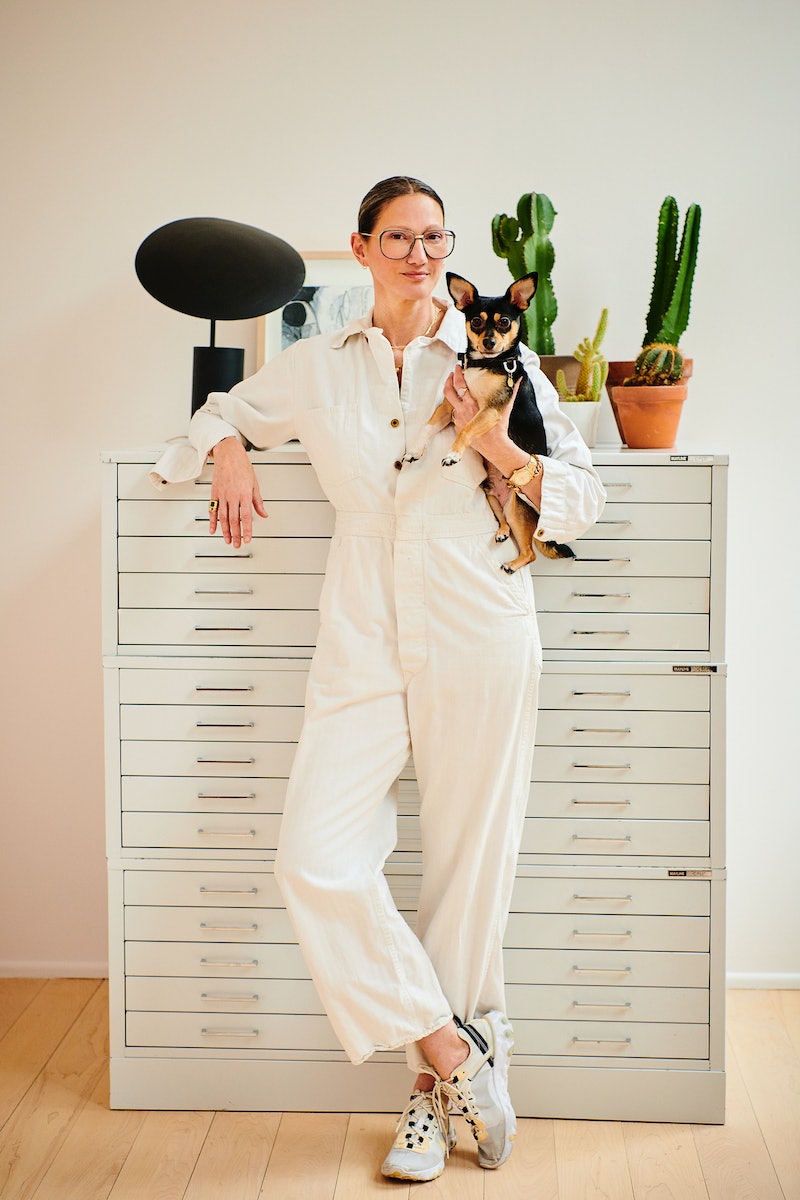 Ten years into my editorial career, I can proudly say I rarely get nervous before a celebrity interview. After some trial, error, and teachable moments I feel like I go into a Q&A pretty calm and collected, even with the most high-caliber celebrities. That said, I couldn't shake the nagging anxious sensation leading up to my chat with Jenna Lyons. Although currently promoting her new HBO Max show, Stylish With Jenna Lyons, I (and most other fashion and lifestyle editors) know her for her nearly 30-year career at J.Crew, where she served as Creative Director and President and was eventually dubbed by The New York Times as the "woman who dresses America."

I dial into our call, ready to get directly to my carefully prepared and researched questions — no funny business. However, a bright, animated tone quickly disarms me: "Hi! Is this Angela?" How are you? I'm literally sitting in the most bizarre contraption." I take the bait to the detour, needing to know more. "I'm still wearing my workout gear, I'm having my hair done, I'm getting my nails done, and I'm talking to you at the same time," Lyons says with a laugh that makes me feel like I'm on the phone with my best friend during her lunch break.

Yes, any preconceived Devil Wears Prada notions fly right out the window in that moment, as Lyons and I discuss her state of affairs since exiting J.Crew in 2017. I find her to be incredibly earnest. "Talking about it more recently has given me a chance to reflect," she says. "But I can't possibly emphasize enough or put into words how incredibly challenging it was. I was there for 27 years. It was my entire life and I think I had formed my identity and sense of worth around my job. That's a really dangerous thing."

Indeed, Lyons joined the legacy label at the tender age of 21 and worked her way up from assistant designer to president in the span of 20 years. It's not surprising, then, that the fashion mogul struggled upon her departure. "I didn't have any direction, I didn't know what I wanted to do, and I didn't know what I could do," says the California native. "The first year was a lot of zoning out. I spent so much time on my couch in my robe. I thought for sure I would want to learn to cook and exercise every day, and I did none of those things."

It wasn't until her "contemplative" state turned to "fear" that Lyons began to realize there was indeed life after J.Crew — or, rather, there had to be. "I started to get scared after about a year, and I began to take any meeting that anybody wanted to have," she recalls. "I was like, 'If someone wants to buy me lunch, I'll go out with them!'" As it happens, one of these so-called "random lunches" was with television producer Matt Hanna of Our House Media. "And that turned into a show," explains Lyons.

Yes, this fateful meeting resulted in the creation of Stylish With Jenna Lyons, which debuts on HBO Max on Dec. 3. Part-documentary, part competition, the program abandons the traditional cut-throat format of predecessors like Project Runway and Next In Fashion, instead opting for a more authentic approach. In addition to following Lyons as she navigates starting new businesses — styling company Lyons L.A.D (life after death) and lash brand LoveSeen — the show also gives a few lucky contestants the opportunity to join Lyons' team through a series of styling challenges. "I didn't want to do a competition show where I'm being hard on people and giving them $5 to make a table," says Lyons. "I wanted to do something that would be more real. So we settled on this idea that would have the element of competition but the processes we put associates through had a level of real reality, not 'reality.'"

As seasoned as she may be in the fashion world, the television landscape proved to be uncharted territory. "We originally hired two teams, a documentary team and a reality team, and that was really challenging," says Lyons. "I did not know how to manage them and how to meld them properly. We had a really rocky start and had to rethink our approach. So, we really found our way on the way."

The end result, however, is what Lyons wanted from the start, a show that not only encourages creativity, but also gives people a glimpse of her authentic self — which I discovered in our conversation to be pretty funny. "We have this preconceived idea of what people are, but I'm actually a total goofball. [..] People hear the word 'president' and think that I'm super straight-laced and uptight, and it's just not that way. I actually relish and deeply enjoy connection with my team and having fun, and I think you get to see that on the show."

Many of us could do for a little "fun" and "connection" right now, and Lyons gets that. While 2020 has proven to be a busy one for her, it's also brought on some unexpected loneliness. Despite feeling very fortunate to have a beautiful Soho loft in NYC (complete with that iconic pink velvet couch) and multiple projects in the works, the reality show star admits this year was a lonely one. She and her ex-husband agreed to have her teenage son, Beckett, stay with him Upstate, "where he could be outside and doing things that felt like what a kid should be doing."

That left her solo in her loft for much of these socially distant months. "I was alone for a lot it, and it was really hard," she explains, adding that, unlike many of those who dove into baking, at-home yoga, and luxurious bubble baths as a form of comfort, she just couldn't get on the self-care train. "I wish I could say I was practicing a lot of self-care, but that has not been my forté," says Lyons. That said, recently, a friend got the fashion icon into at-home strength-training, which Lyons has been doing every morning: "My ass is less square and it's easier for me to get up off the ground now." See? Funny.

If Lyons proved anything to me in the 20 minutes we spoke it's that rebirth can and will happen at some point in your life — sometimes, several times. You just have to be open to what that rebirth will look like, and make time for the occasional "random lunch."