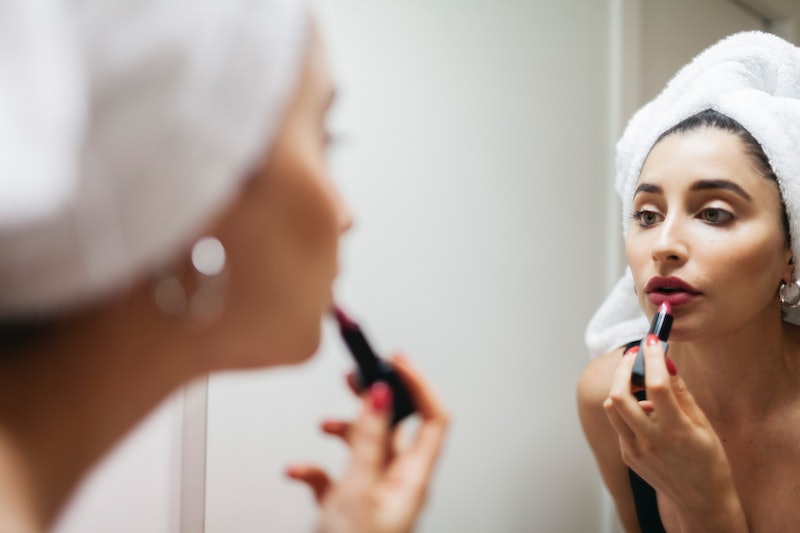 There’s a meme that used to bother me a lot: "Don't let let anyone with bad eyebrows tell you sh*t about life." It was shared on Instagram a few years ago by makeup artists, hairstylists, and Lena Dunham. The sentiment was harmless really — don't trust anyone who hasn't mastered basic grooming — but for me, the idea of bad eyebrows as a mark of incompetence really stung. My eyebrows are an optical illusion. Underneath a combination of microblading, hair dye, and brow gel, I have very little in the way of natural strands thanks to a hair pulling habit — trichotillomania — that started in the third grade and continued through my twenties.

It began as a tick. I would run my fingers back and forth over my eyebrows and eyelashes, feeling around for a wisp of hair to uproot from the follicle, over and over, until a little pile of strays accumulated. Before long I had em dashes for eyebrows and lashes so thin you could see right through them. I began spending a lot of time trying to figure out how to hide the damage, first with a grey kohl pencil stolen from my mother’s makeup kit, and later with eye shadow, until eventually I gave up and wore my asymmetrical eyebrows and sparse lashes as they were.

Over the years, the urge to pull came and went unceremoniously. I’ve gone months free from the sensation, and experienced full regrowth, only to get the itch again without warning. Mostly, I pull my hair while I’m writing, when I’m nervous, and during uncomfortable conversations. Sometimes it happens when I'm excited. Other times I don’t realize until it's too late.

For most of my life I’ve been embarrassed by my hair-pulling, and I have wanted desperately to hide it. I’ve made excuses for why half of my eyebrow was missing or I had too few eyelash hairs to hold a coat of mascara. I had a freak lash curler accident! I’m so bad with tweezers! I don't know, they just fell out!

“Stop that,” a boyfriend used to say, and swat my hand down when he noticed it creeping towards my eyes, knowing what would come next. He once drew my eyebrows back on for me masterfully with a Dior Brow Liner when I didn't want to deal with them myself. The more I let him (and other people) see, the less shame I felt.

There are a number of treatments for trichotillomania, cognitive behavioral therapy, hypnotherapy, medication, and I have tried them all. I've worn non-prescription frames and lash extensions. I've stacked rubber bands around my wrist to snap instead of pulling. The truth is, none of the textbook solutions made much of a difference for me. What helps is sleep, exercise, fulfilling work, and peace in my personal life — all beneficial whether you're a hair puller or not.

Now when the sensation sweeps in and I look down to see a dusting of stray hairs on my keyboard, it's no more than a familiar irritation because the shame has finally evaporated. I'm not willing to berate myself for a behavior that doesn't affect my health or quality of life — beyond how I look. If anything, losing my eyebrows and eyelashes over and over has taught me to be kinder to myself. It has also given me an encyclopedic knowledge of every brow and lash treatment on the planet.

My eyebrows are made up of microblading by The Eyebrow Doctor, ModelCo More Brows Fibre gel, and sometimes a few strokes of Benefit Brow Contour Pro (a four-in-one pencil that makes brows look multidimensional, not monotone). I leave my sparse lashes bare during the day because nightly mascara removal tends to cause more hair loss. If bald spots along the lash line bother me, I fill in the gaps with Diorshow On Stage Liquid Liner. When I do wear mascara it's Charlotte Tilbury's Legendary Lashes, a thickening formula that coats and multiplies the hairs I have.

As it turns out, bad eyebrows have taught me quite a bit about life.