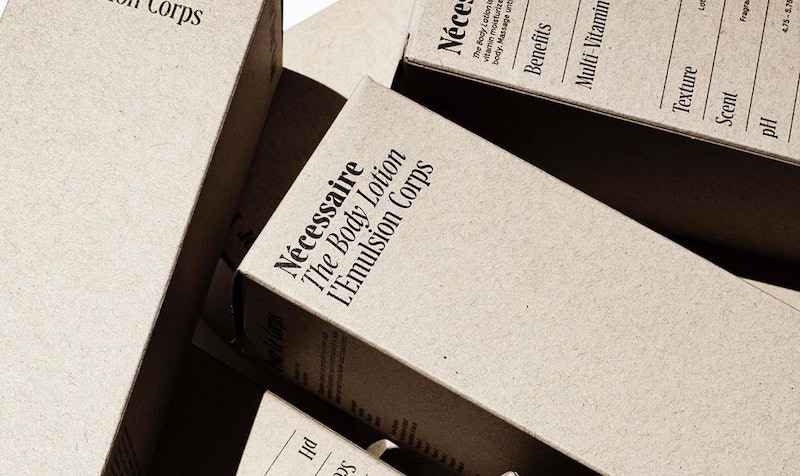 It's been less than two years since the body-care brand Nécessaire first launched in November of 2018, but you wouldn't know that, just by glancing at its social media — or the immaculately poised photos taken and posted by its fans. With close to 100,000 followers on Instagram alone, the cleanly formulated and crisply packaged body brand skyrocketed to fame, celebrated by editors and shoppers alike. But beginning within the body-care category wasn't necessarily a given.

"People always ask me this question, they’re like, why in the world would you start in body?" Nécessaire's co-founder and CEO, Randi Christiansen, tells The Zoe Report over the phone. "And we like to say that skin doesn’t stop at the neck, it continues on. Yet body just felt like such an afterthought. And I think we wanted to go the opposite way, we wanted to make it the first thought, and we wanted to give it the attention it needed."

It's safe to say that Christiansen and fellow co-founder Nick Axelrod completed this goal. The two met after Christiansen's work with the Estée Lauder Companies took her to L.A. "Nick and I, we laugh a lot because we’re sort of the only two kids in Los Angeles wearing all black — we both knew right away that we were both implants in the Los Angeles scene," she says. Still, the two had industry veteran status in common: Christiansen had close to a decade of experience at La Mer under her belt; Axelrod co-founded Into The Gloss, and served as its editorial director for two years.

"I think we came to beauty from two such unique vantage points. Nick very much into it from your world, the editorial side and the culture side and conversation side. And I came into it from the brand side and product side and ingredient and design side," says Christiansen. "We were seeing all of these big movements in the space — big things, like the wellness engine just taking off. We talked a lot about how clean has sort of becoming a given. For us it was like, of course, if we’re going to launch something, it’s going to be clean."

Zeroing in on both clean formulation and overall sustainability has been a defining feature for the brand; Nécessaire has been Climate Neutral Certified since January 2019, is a 1% for the Planet member, and manufactures its products in the United States. Still, Christiansen says the brand isn't perfect, referring to the recyclable plastic components it uses. "It’s a real challenge, because we're inside the shower. Can’t be in glass because people can really get hurt if it slips. Can’t be in many of the metals, because they can’t take the water. So, how do we start to innovate these plastics into the bioresins and post-consumer resins and all that?" she asks. "It’s what I’m working on now."

You can count on whichever form Nécessaire's packaging takes in the future to look incredible. From body wash to deodorant, the brand employs its own now-recognizable font, layered on top of muted green and contrasting grayscale; the duo worked with the graphic artist Brian Roettinger to create the logo and graphic identity.

The products speak for themselves sometimes, too. Nécessaire's The Sex Gel, a $22 personal lubricant, has been part of the brand's lineup from the beginning. "The reason we have a lubricant is because, to us, body care is so much more than a lotion and a wash, right?" Christiansen says. "It’s very much what we wanted to do as a team, this idea that, no, it doesn’t need to be hidden away at the bottom of your drawer."

It's impossible to discuss Nécessaire's success without mentioning its on-trend scent playbook, as well: sandalwood, eucalyptus, bergamot, or, importantly, fragrance-free. "[Our ingredients are] what’s interesting, and what and how do we deliver that in a big way in this category that has really been dominated by scent? How do we make it a skincare moment, or a skincare idea for the whole body?" Christiansen notes. "And I think this was what was unique about our approach to it. It was, you know what, we’re going to have a scent-free version of all these things because the product has to be able to stand on its own."

Explore the brand for yourself — including the new fragrance-free deodorant — by visiting Nécessaire's website, or find products at stockists such as Violet Grey, Nordstrom, and Sephora.