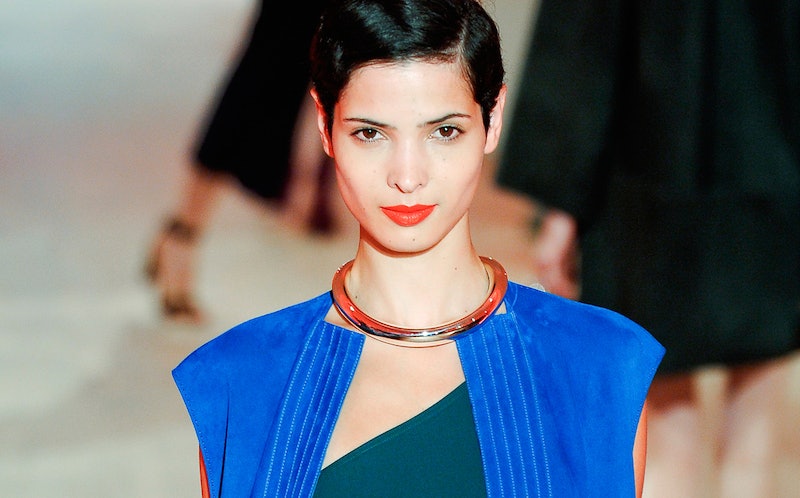 For all the attention its iconic bags and ready-to-wear receive — and rightfully so — Hermès has always excelled at the art of crafting tiny, bite-sized luxuries. A silk scarf here, a bangle there, and, once March of 2020 arrives, Hermès' new lipstick line: Rouge Hermès. According to The Wall Street Journal, the upcoming beauty collection is the product of a multi-decade journey; longtime Hermès fans will recognize the line's name from one of the house's perfumes, launched back in 2000.

That said, the Rouge Hermès lipstick is thoroughly contemporary. The lipstick itself retails at $67 — which includes both a refillable, magnetic-clasping case and the highly pigmented lip product itself. “We wanted to do refillable so we could use more luxurious materials that had their own value,” Pierre Hardy, jewelry and shoe creative director, told The Wall Street Journal. The result is gorgeous: The Rouge Hermès components are dramatically color-blocked yet unexpectedly minimalist, complete with handbag-inspired lacquered metal and Permabrass hardware famously found on the Birkin bag. Lipstick refills will only cost you $42.

And expect to see modern makeup knowhow included in the formula. Although there hasn't been much revealed about its ingredient list — yet — The Wall Street Journal did shout-out "natural" beeswax and white mulberry extract, both creations of Chanel and Dior makeup alumnus Jérôme Touron.

This initial drop will include 24 shades (including timeless red and a very Hermès orange) in two finishes — matte and satin — plus a lip pencil, lip brush, and a small mirror. And you can expect to see more from Hermès' overall beauty line in the future, as well; the house has already revealed that there will be $72 seasonal drops as well as new beauty categories launched every six months.

Fans who don't live anywhere near a house boutique will still be able to get their hands on the new product, too. For its March debut, the lipstick line will be available on Hermès' website, in-store at select Hermès locations, and at stockists such as Saks Fifth Avenue and Bloomingdale’s — making the upcoming lipstick a tiny luxury even more fans can access.