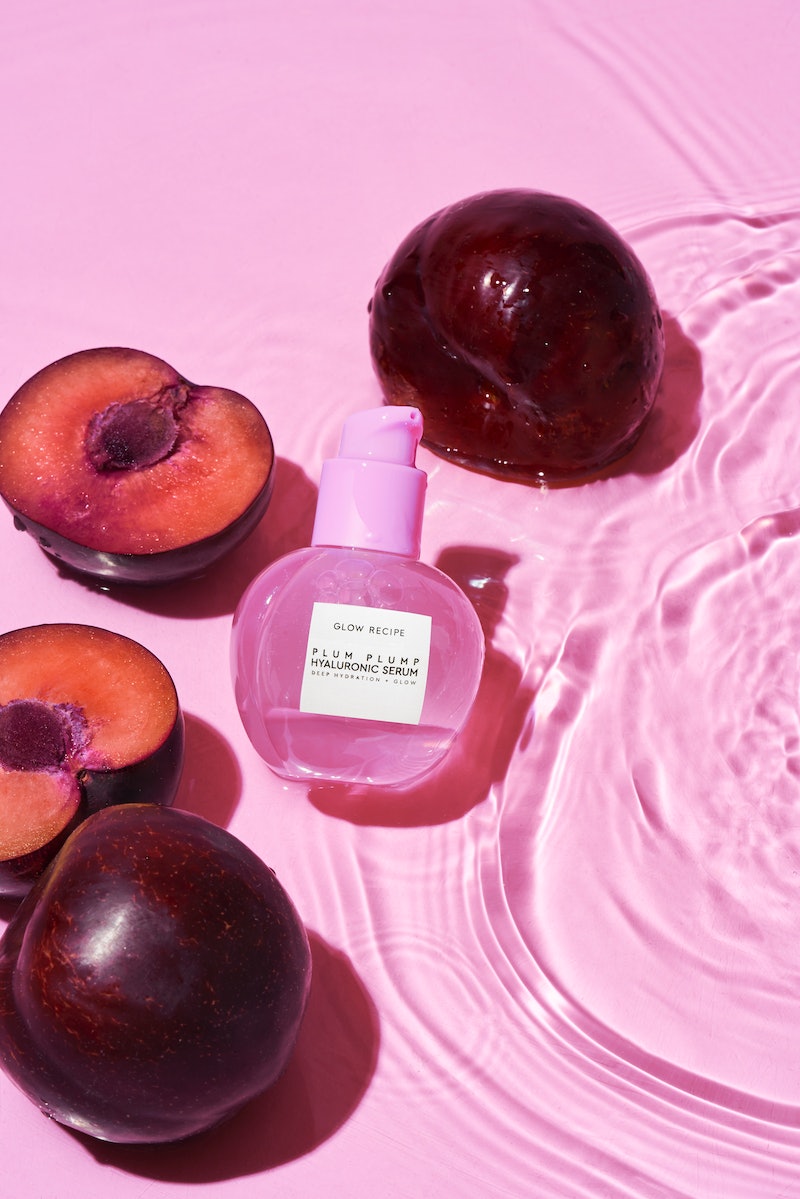 If there's a blend of blueberry, pineapple, papaya, banana, and watermelon in your bathroom cabinet, you have one of two things — a misplaced fruit salad or some of Glow Recipe's best skincare products. If it's the latter, thanks to a brand new drop, you now have one more fruity bottle to add to your collection. The new Glow Recipe Plum Plump Hyaluronic Serum is the brand's most recent creation that provides a powerful hydrating formula responsible for bouncy, moisturized skin. And, similar to its other products, it uses fruit to up the potency of classic skincare ingredients.

While you may already have a vial or two of hyaluronic acid serums floating around, this $42 purple bottle has four types of it in five different molecular weights; a must if you're looking to take hydration deeper into your skin. But this formula also stands out because of an unexpected mix of plums — three to be exact.

This fruit's ability to boost moisture aligns with one of the top priorities in K-beauty, which is hydration, according to Sarah Lee, co-founder and co-CEO of Glow Recipe. "We know how powerful fruits can be which is why we always are looking for new fruits to be the powerhouse of the formula. From there, we look holistically at what ingredients would work well with that fruit to be the most effective. With plums, not only are they antioxidant rich but they are extremely hydrating," Lee tells The Zoe Report in an email. "Plums actually help synthesize your skin’s natural hyaluronic acid production as well!"

After this discovery, plums were basically a no-brainer addition; it was simply a matter of choosing which ones to include.

"Each variety of plum has so much to offer that we decided to use a blend of three that separately have their own unique benefits but when combined together are even more powerful," says Christine Chang, the brand's other co-founder and co-CEO. "Kakadu plum has the highest concentration of vitamin C, about 100 times of an orange, so it's both brightening and a powerful fighter against fine lines and wrinkles. Illawarra plum has seven times the concentration of anthocyanins, an antioxidant prevalent in blueberries. Lastly, the Burdekin plum is rich in minerals like magnesium, calcium, and potassium, which are really beneficial for skin."

But rather than throwing some potent plums in with just any kind of hyaluronic acid, Chang and Lee wanted to do more with the formula — thus, they decided to include hyaluronic acid in five different molecular weights "to maximize the ingredient and hydrate skin in all layers," according to Lee. "We also pushed the boundaries of HA and leveraged fermentation and acetylation processes for a deeper penetration," she adds.

When it comes to working the new serum into your meticulously crafted routine, Chang suggests doubling up on serums to address multiple concerns depending on how your skin is feeling that day. For dry, dull skin, she recommends pairing the Plum Plump Hyaluronic Serum with the Pineapple-C Bright Serum for a glass-skin effect. And if your skin is downright dehydrated, follow the new formula with the Pink Juice Moisturizer "to maximize the plum and hyaluronic acid combination with holy grail hydrator in watermelon extract."

Shop the new serum on Sephora's site starting Sept. 1, and head to the product's page below to sign up to get notified when it's officially in stock.