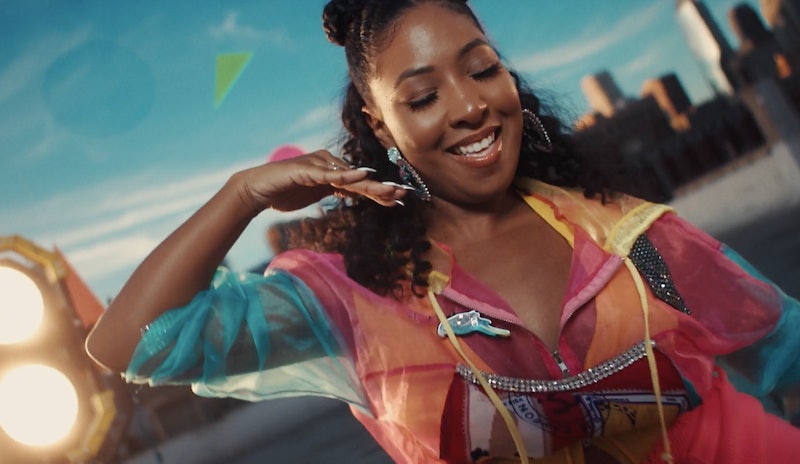 Makeup has always been a vehicle for music video storytelling. Think back to David Bowie's futuristic blue eyeshadow in "Life On Mars?", Beyoncé's polished glam in "Hold Up" (complete with the yellow dress), or, well, any Lady Gaga look. Rarely, though, does a beauty brand itself take the reins for creating both a song and a video. But to completely understand why the e.l.f. "Eyes. Lips. Face." music video — yes, that e.l.f. Cosmetics — dropped Dec. 16, you need to rewind the clock.

All the way back to October, to be exact. The iLL Wayno and Holla FyeSixWun song, aptly titled "Eyes. Lips. Face.", was originally a part of the brand's #EyesLipsFace TikTok challenge — aka a branded campaign that flourished on the music-meets-video social media app thanks to 2.8 million user-generated clips. And since so many people (including Ellen DeGeneres and Terry Crews) were creating videos with a sample of the song, the song itself quickly skyrocketed to fame, too. "Eyes. Lips. Face." rose to fourth place on Spotify’s Global Viral chart, with the #EyesLipFace challenge amassing 4 billion views on TikTok.

Fast forward to now. Sans video, the two-minute track has more than 1 million views on YouTube — so, it's easy to understand why the beauty brand originally behind the song would release a video. But, what does all of this have to do with makeup?

Surprisingly, more than you'd think. The song and its music video act as a love letter to primping: It juxtaposes commonplace scenes — like friends, dancing at a party — with behind-the-scenes-like footage of said people putting on their makeup before ever stepping out. Together, it makes swiping on your lipstick or blending out eyeshadow just as glamorous as the classic, music video-standard dance party. In e.l.f.'s universe, it's not just about going out; it's about the joy of getting ready, too.

Which all ties back into makeup itself. "From the beginning we set out on a mission to unleash the brand’s innate renegade spirit," noted Kory Marchisotto, e.l.f.’s chief marketing officer, in a press email. "A ground-breaking TikTok campaign, a viral chart-topping song, and now the release of a music video in partnership with Republic Records is an illustration of our ability to break the rules of beauty."