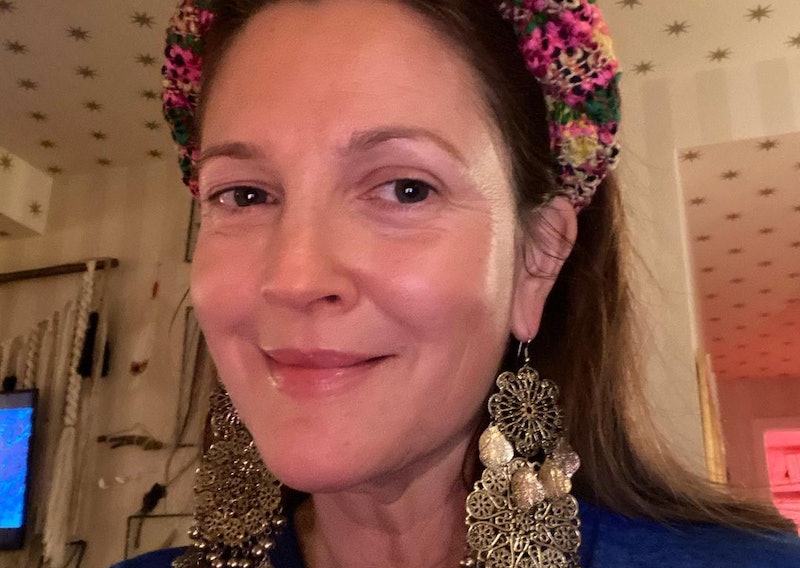 Although this isn't a surprise for anyone who lived through the '90s, Drew Barrymore thinks about the short hair she sported that decade as much as anyone else. In a Dec. 21 interview with Shea Simmons for Bustle, the actor, producer, and Flower Beauty founder recalled a time she attended the Cannes Film Festival for the movie Poison Ivy with cropped, black hair. "No one dressed me," she explained. "It was awesome. I'll never forget it."

And the short, dark hair was very different than the tousled blonde waves Barrymore wore in Poison Ivy, more closely resembling the hairstyle the star had in Guncrazy. (Minus the color, of course.) Then again, Barrymore's entire hair transformation through the '90s and into the early 2000s was an evolution through shapes and styles. Who could forget the iconic blonde bob of Scream, or Never Been Kissed's loose ringlets?

"I wish we all knew to embrace ourselves a little more, [like] when we have bad bangs or do something wacky," Barrymore continued in the interview. "It's because you are uncomfortable with change, and maybe you don't like it in that moment, but trust me, looking back, you're going to love that you did that."

And looking back on any one of Barrymore's still-recognizable '90s hairstyles is a treat — and offers up ample haircut inspiration, since that decade continues to deliver trend after trend. Below, some of TZR's favorite Barrymore hairstyles from the '90s.

This might be the most iconic Barrymore look of the '90s: middle-parted, cropped blonde waves that frame her face and can be tucked behind ears whenever necessary.

What she might've lacked in screen time for the hit 1996 film Scream — a purposeful decision from the movie's cast and crew, as it turns out — Barrymore made up for by introducing one of the most iconic hairstyles in horror movie history.

Before Game of Thrones inspired a revival for fairytale hair and braids, there was Barrymore in the 1998 Ever After.

Is there anything more '90s than baby bangs and daisies as accessories?

Technically speaking, Never Been Kissed is a rom-com, though you could also view it now as a walk through every top hairstyle of the era.