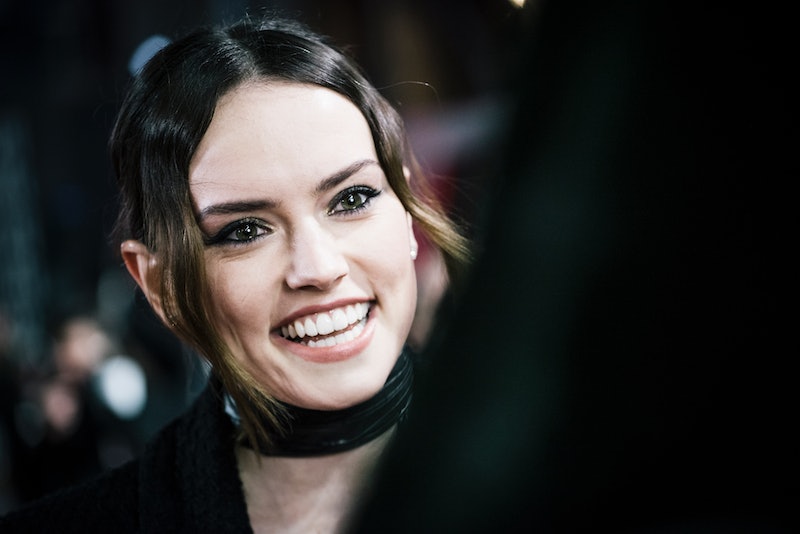 Summer is in full swing, and it looks like wedding bells might soon be ringing for yet another Hollywood couple. Rumors began swirling in early June when Star Wars star Daisy Ridley was spotted in London flashing what appeared to be a diamond engagement ring on that finger. The 27-year-old actor met her partner Tom Bateman on set for Orient Express back in 2017, but has kept mum about their relationship ever since. Deleting her Instagram earlier this year, the London native told Glamour she keeps her personal life rather private, but Daisy Ridley's engagement ring is setting off speculation that the lovebirds are ready to make it official.

The Peter Rabbit actor has been on the promotional trail for her latest Shakespearian film, Ophelia, and has demonstrated a lineup of sleek and sophisticated looks along the way. Ahead of an appearance at The Tonight Show Starring Jimmy Fallon during which she shared a hidden talent for rapping (namely Lil' Kim's verse in "Lady Marmalade"), Ridley was spotted in a flowy grey number in sunny New York City. Floating by in the ladylike frock accented with a bold lip and coordinated red pumps, Ridley's bob was pulled behind one ear for retro-inspired charm.

Flashing the alleged engagement ring she's yet to confirm or deny, the actor promptly ignited the rumor mill, and chatter around the supposed engagement ensued. The diamond, set on a single golden band, is an understated accent to her refined, classic style. With wedding season upon us, love is in the air, and Ridley's chic jewel is worth considering for your lineup of seasonal adornments. Whether you're headed to the altar and want to drop an inspirational hint to that special someone — or just need to up your jewelry game — The Zoe Report has you covered with Ridley-approved rings, ahead.

Simplistic and classic, this understated pick is easily stacked with so many styles.

Less is more when it comes to this dainty pick that won't break the bank.

Opt for the unconventional with this chic and stunning floating diamond from Katkim Jewelry.

Despite featuring three gorgeous stones, this ethical golden ring will still remain subtle and timeless alongside the rest of your favorites.

Go for a retro aesthetic with this antique-inspired textured ring from Brooklyn-based brand, Catbird.