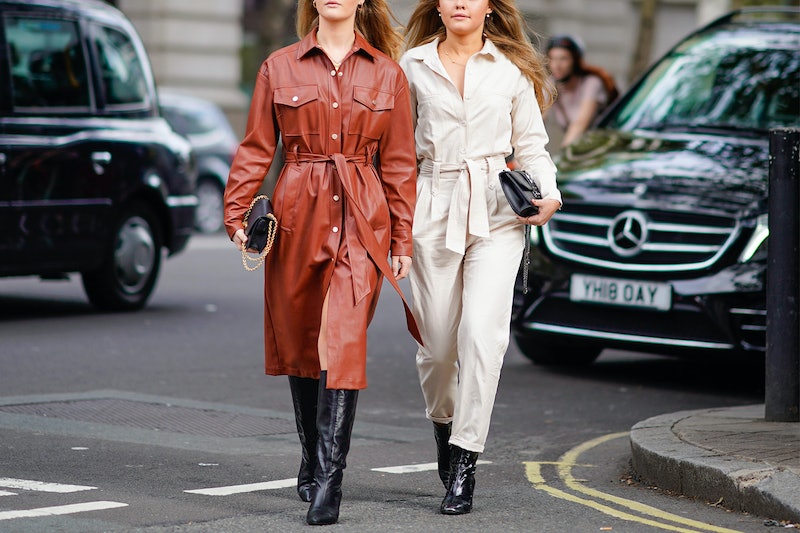 For the past few months, it was nearly impossible to scroll through Instagram — or walk down any street in New York City, really — without seeing someone wearing a pair of snakeskin boots. They dominated the first moment fall hit and quickly became the shoe of choice for the Fashion Week crowd, but quickly felt like a trend everyone had tried. The next iteration of the style, however, isn't just cooler, but also way more luxe: Crocodile leather-effect boots are trending this winter, and they're showing zero signs of slowing down.

"This season high-quality, croc-stamped leather makes an appearance in rich hues borrowed from late 19th century paintings and the unconventional elan of Montmartre," says Laura Villasenin, founder and designer of Miista, the accessories brand that's quickly become a favorite of influencers like Jiawa Liu of @beigerenegade and Dylana Suarez. And the trend, which was a natural progression of all the other animal print pieces that shot up in popularity (looking at you, Realisation Par midi skirt), should come as no surprise.

"It comes from the desire to go back to luxury materials with a longer shelve life," Villasenin says. "Rich texture balances out clean, tailored, and therefore timeless shapes. Croc combines a desire to stand out and embrace the most badass kind of animal."

Runway brands like Fendi, Tibi, and Aquazzura have all debuted pairs in the recent months, and they're selling out quickly — sometimes despite a four-figure price tag.

But just like the snakeskin boots that came before them, most crocodile-effect leather boots aren't made from actual croc: "[Miista uses] a mix of heat and pressure to create the raised texture, using high-quality, 100 percent Italian cow leather, which is hand-finished by leather crafts(wo)men," Villasenin says. And while most croc-effect styles are made with cow of calf leather, there are quick a few vegan-friendly pairs on the market too: Look for materials like polyurethane and rubber, both of which hold their shape.

Not sure how to wear them? Style your favorite croc-effect shoe like you would any other pair of boots that you'd want to show off: with equally rich warm-weather textures like wool, cashmere, or faux-fur, Villasenin says.

Ahead, shop 15 must-have pairs before they're gone.

These tall croco-effect boots are almost sold out — and for good reason. They pair exceptionally well with loose trousers for an unmistakably cool off-duty vibe.

Loq's croc-embossed leather boot has a super-low heel and a padded leather insole, making them one of the most comfortable boot on the market.

This green pair, which hits just at the top of the ankle, looks deceivingly luxe.

Don't worry: You won't lose 15 minutes of your life lacing these up every morning. The concealed inside zipper and low heel make this pair a no-brainer.

Nanushka's croc-effect ankle boot would look great with a pair of non-stretch denim.

Anine Bing reimagined her cult-favorite Stevie boot — which was made popular in its patent leather form — in black crocodile-effect leather for the holidays.

This pointed-toe croc-effect boot by Fendi has a geometric heel that you won't want to cover up with wide-leg pants. Pair them with cropped pin tuck trousers instead. Oh, and have you seen the color?

Forrest green looks extra-luxe in embossed croc — and every pair of ATP boots are handmade in Italy.

A subtle upgrade from your go-to black pair, these Clergerie boots look just as great with dark-wash denim as they would with a wool midi skirt.

The clear perplex heel makes this iteration from Ellery stand out even more.

The low heel on this embossed leather boot makes Attico's take on the trend that much more wearable — even in patent red.

A slightly rounded toe and a 2.8-inch heel mean these Loeffler Randall booties are perfect for everyday wear.

If a stacked heel is more your style, try these black, croc-embossed leather boots from Aussie brand Jaggar.