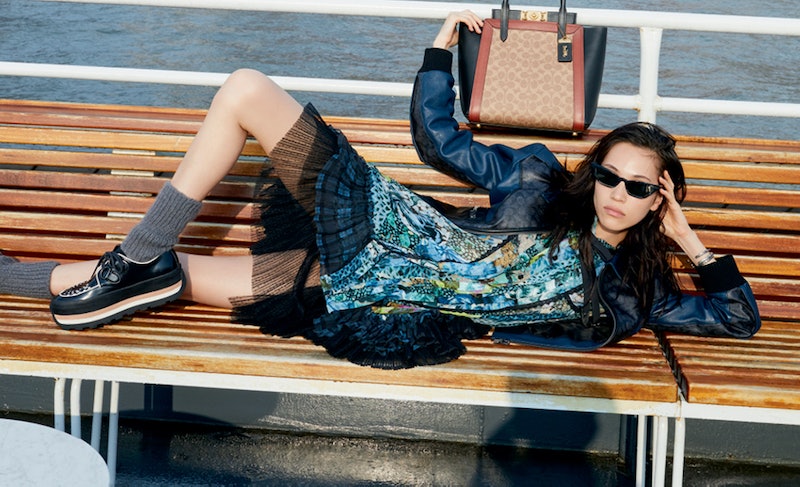 Remember flipping through the glossy pages of your favorite fashion magazine, and catching an ad campaign so good it took your breath away? One of those sparkling, next-season campaigns you wished you could jump right into? If you've never had your heart captured by a brand before, steady yourself for Coach's Fall 2019 campaign. Captained by Creative Director Stuart Vever, the "Dream It Real" campaign showcases the faces of the brand — Michael B. Jordan and Kiko Mizuhara — as well as a new lineup Coach has dubbed its "21st Century Dreamers." Warning: It'll make any non-New Yorkers want to book plane tickets for the Big Apple, stat.

Blame it on how expertly the photographer Juergen Teller captured the city that never sleeps. “Juergen was my instinctive choice for Fall,” reads a quote by Vevers in a press email. “He is able to create the warm, unpretentious, and playful spirit I wanted. He is known for capturing the unique essence of his subjects, and is able to reveal the humanity and authentic personalities of our cast. His portrait of our home, New York City, is new and fresh in a way that speaks to my evolved vision for the house and the inclusive, unapologetic, and free-spirited attitude that defines us.”

Which occasionally means parading around the city with one hand clutching your bag and the other on the leash of a goat. For the campaign, actress Jemima Kirke was styled somewhere on the Upper East Side with a dark Kat bag and a shaggy-haired goat — and somehow, the two things unexpectedly complement one another well. Meanwhile, Yara Shahidi posed in Central Park with a floral Tabby bag, while Liu Wen was paired with the Troupe bag and bouquet after bouquet of flowers, reclining in a chair on the Lower East Side. Hey, it is New York City; you never know where it's going to lead you.

Besides the star-studded cast and multiple Todd Tourso-directed campaign films set to be released, shoppers will undoubtedly be most excited by the bags. The campaign reveals glimpses of Coach's new Fall 2019 bags, which includes the Tabby shoulder bag, the Troupe tote, and the Rivington backpack.

Thankfully, a handful of the Fall 2019 Coach bags are already available to order (or pre-order) online. To get a jump-start on your autumnal dressing, continue scrolling down; and remember to keep an eye on Coach's website for more campaign visuals — and additional Fall 2019 releases, of course.