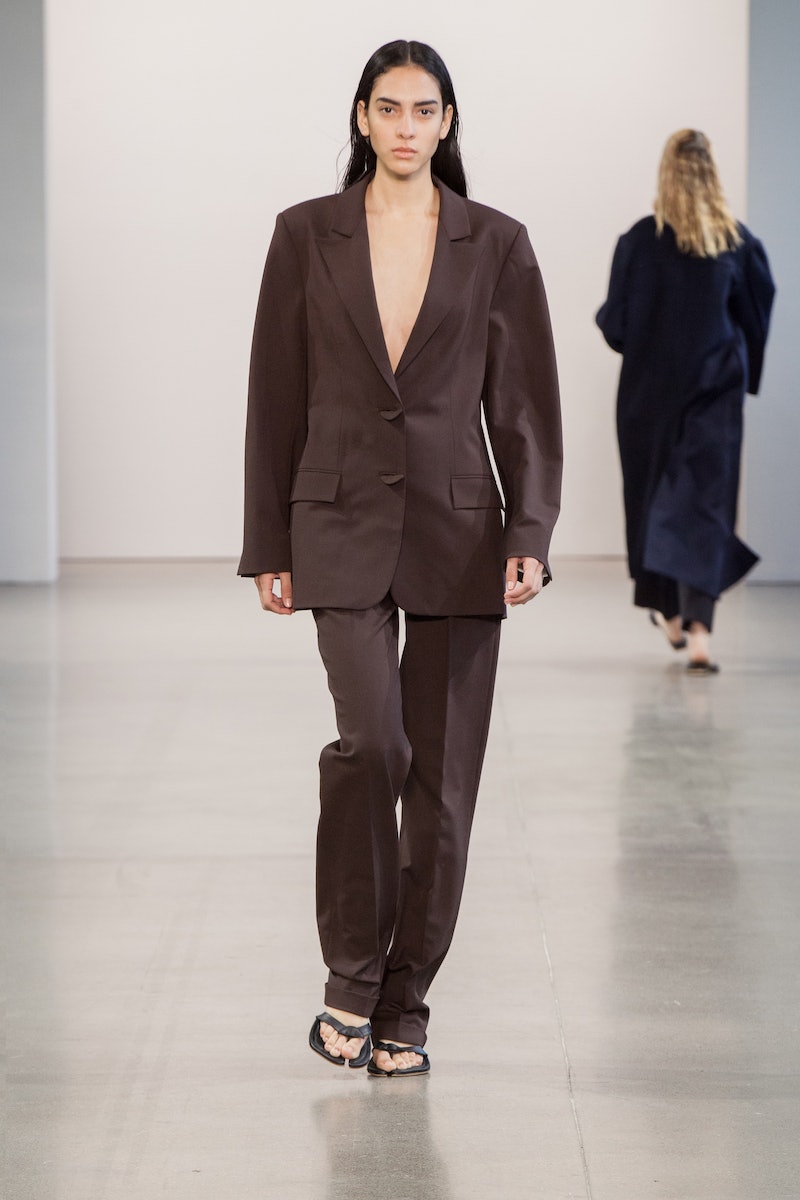 For designers who take a more-is-more approach, the sky's the limit on innovation; more outlandish creators can always add another brooch, another appliqué, another curveball to keep things interesting. It takes true talent, though, to continue to reinvent minimalism season after season. It's an arena where mostly only true mainstays have succeeded: The Row, Khaite, (Old) Céline. For fashion-crowd darling Svitlana Bevza, though, it appeared a walk in the park — and at Bevza's Fall/Winter 2020 show during New York Fashion Week on Feb. 9, a few pointed styling ideas and phone-lifting pieces breathed new life into a show that some show-goers may have skipped out of fear of redundancy.

Time and time again, Bevza is proving it's here to stay — and that there's no limit to the idea wearable elegance. This season, the concept at the center of Bevza's inspiration was one of self-care. Partly obvious through the flip-flops that resembled those you might wear post-pedicure, Svitlana Bevza wanted to reflect on the idea of taking care of ourselves, both literally and figuratively. "It's very simple. It's literally made from when you're [getting] a pedicure," Bevza tells TZR backstage after the show, referencing the contrast-stitched thong sandals that were akin to the slippers you get while waiting for your toes to dry at the salon. "It's about taking care of yourself — taking care of your body is the first step to taking care of your soul and inner state. We have a very quick world and we need first to take care of ourselves, do something pleasant for ourselves. This was very simple and I take inspiration from real life and what I need."

And, we can't take care of our planet without taking care of ourselves first. Sustainability, too, was at the core of the collection, with intarsia knits made of cotton yarns from recycled denim, and collars made from recycled plastic bottles. But the word "sustainable" also has to do with the longevity of the pieces we wear — and rather than pieces meant to be sold to The RealReal after a season or two, Bevza hopes its wardrobe staples can stick around. "I basically do the same things [every season], aesthetic- and attitude-wise" she says, referring to the slow evolution of her brand. "I stand for elegance, with some details that can live a long life. As a designer, I have a responsibility not to educate, but to show sustainable alternatives while keeping the product looking good," she says.

That might explain why some of the bolder colors she uses in this collection felt like a real risk. ("That was so bold for me. I never do colors!" she tells TZR.) Can muddy browns and bright aquas withstand the test of time? In the right renditions, this show proved, they can. A midi-length turquoise knit layered over slightly-baggy brownish trousers felt timeless despite the funky color palette (and despite the heeled flip-flops). A feat indeed.

The necklines and collar details are also worth noting, with square, notched necklines taking center stage and oversized, vintage-inspired collars proving their staying power. The styling with a blazer in hand or a casual half-tuck (read: when you tuck the front of a shirt in but not the back) confirmed Bevza's wearability, while a low-slung skirt worn over a high-cut bodysuit made the audience perk up with raised eyebrows. An open back or an all-white look might not have felt all that novel to those who practically attend fashion shows for a living, but the additions of a utilitarian handwarmer or black logo on a super-sheer, white top gave those ideas a New York-ready edge.

Overall, some might argue it's too late in the game for a new minimalist mainstay to join the fashion fleet. But for the shopper who admires Bottega Veneta from afar but can't stomach paying a month's rent on a piece they've already seen all over Instagram, Bevza might just be the next best thing.