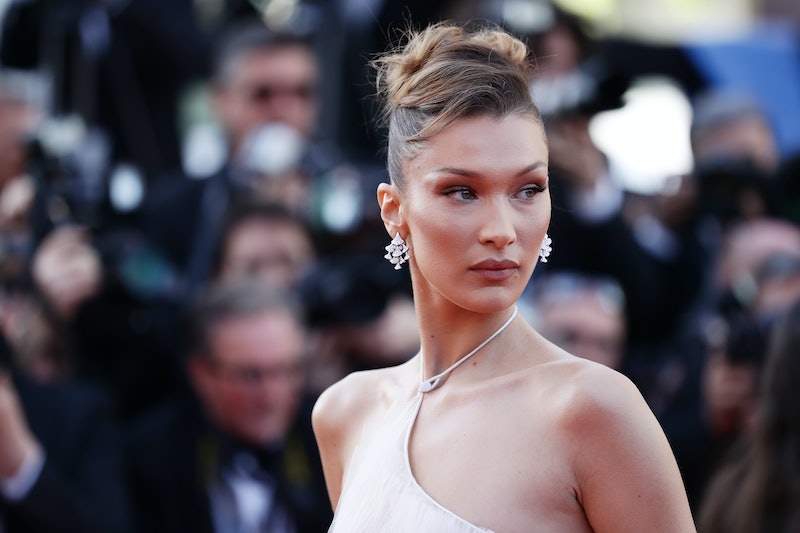 Your favorite piece of jewelry from childhood was just resurrected by the street-style empress, herself. Bella Hadid is obsessed with her heart-shaped earrings, barely giving them a break over the past week. Perhaps the best thing about her nostalgic accessory is that it's so budget-friendly.

The Hadid sisters spent their Independence Day weekend channeling their inner child at Disneyland Park in Anaheim, California. It was only fitting that the retro duo dressed like a couple of '90s kids while out mingling with the Disney princesses.

Gigi sported fuchsia tie-dye co-ords like the kind you used to own with chunky white tennis shoes and a sweatshirt tied around her waist while carrying an old-school disposable camera. Her younger sister opted for a black crop top with leopard trim by UNIF and Brandy Melville sweatshorts. It was her accessories, though, that added a playful flair.

Her adventures at The Happiest Place On Earth called for a quirky, cartoon panda-adorned Louis Vuitton pochette and a custom diamond name necklace by LAJOUX. The highlight, however, was a pair of $40 heart-shaped earrings by Frasier Sterling.

Not all that long ago, wearing heart-shaped anything might have been called tacky. Nowadays, all the fashion girls are vouching for the childlike jewelry.

Before her visit to the Magic Castle, Hadid sported her $40 Lovers Hoops during an evening out in West Hollywood: Proof that the throwback accessories can be made edgy, too.

A day before the Disneyland outing, Meghan Markle attended Wimbledon wearing a sapphire heart button ring by Jessica McCormack. Alternatively, Taylor Swift sported a pair of heart earrings similar to her model friend's in her latest "You Need To Calm Down" music video.

Heart jewelry even made a cameo at Paris Haute Couture Week via the woman who monopolized the whole show, Celine Dion. On the final day of the fashion extravaganza, the singer wore a Vetements' version of the iconic sapphire necklace from Titanic.

Ready to follow your heart? The model's favorites and similar heart-shaped earrings, ahead.

These earrings that Hadid can't stop wearing put a playful spin on the classic hoop trend.

Up the budget for these gold-tone statement earrings by Balenciaga. Take it from the it-crowd: They're worth the splurge.

These dainty little studs are a subtle way to introduce heart shapes into your jewelry collection. They're super affordable, too.

Get romantic with these sweet enamel drop earrings. They're the perfect accessory to add a pop of color to your all-white summer outfits.