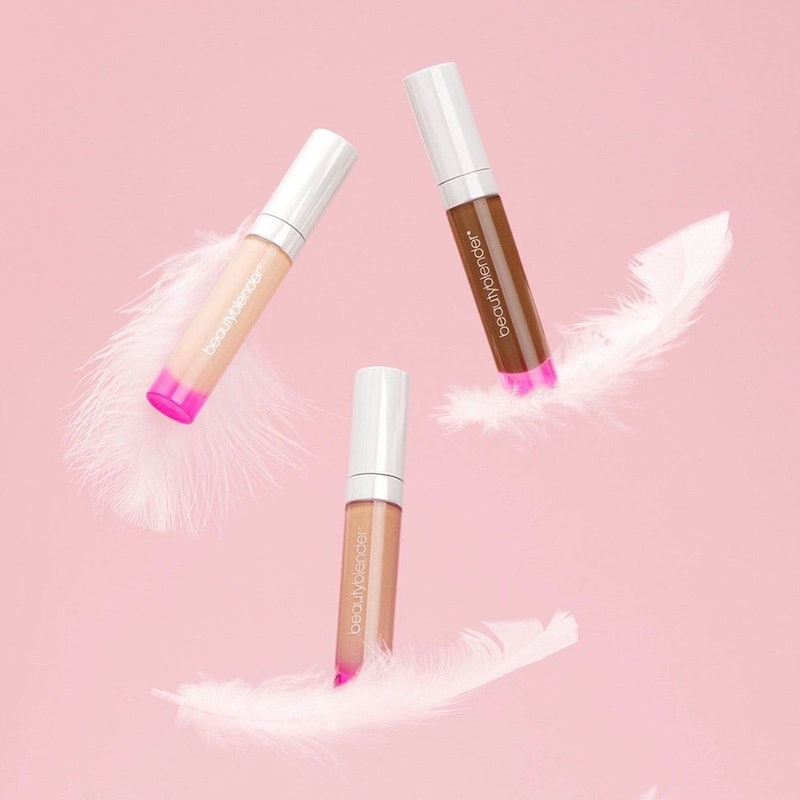 It's hard to believe almost two years have passed since fan-favorite sponge-applicator brand Beautyblender announced its foray into foundation. It's followed up with highlighters, primers, and setting spray, but left out one critical item: concealer. Not anymore, however. Beautyblender’s Bounce Airbrush Liquid Whip Concealer is finally here in nothing less than 40 shades of glory.

The new concealer, $26, fits snugly into the brand's already established makeup line with shades that complement and work with the brand's Bounce Liquid Whip Long Wear Foundation. Aside from range and basically the whole name, the Bounce Airbrush Liquid Whip Concealer also has the same key ingredient for ensuring lightweight, full coverage: hyaluronic acid. The ingredient locks in moisture and plumps the skin for a bouncy finish. But the concealer also features its own tailored ingredients like tetrapeptide, polymers, and peptides that work on brightening the under-eye area and smoothing out the skin.

One of the most exciting parts about this product isn't the formula, though; it's the applicator. The doe-footed, dual-sided applicator is essentially a mini Beautyblender sponge attached to a wand. An Instagram post from the brand explains the flat side is made for broad strokes under the eyes, the bulbous side for over the brows, and the pointed tip helps to exact lines for contouring and blemish covering.

And whether you want to traditionally conceal or use the product for highlighting and contouring, there's a shade for many skin tones and uses. Pick a true-to-skin color for dulling blemishes, erasing dark circles, and evening out skin tone, but go two shades lighter for a highlight or two shades darker for a contour.

Including such a broad shade range was paramount for Beautyblender's founder Rea Ann Silva after the Bounce Foundation faced criticism upon its original launch in 2018. The brand put out 32 shades, but influencers and beauty bloggers like Alissa Ashley, Jeffree Star, and Monica Style Muse were critical of how many landed on the lighter side of the spectrum.

Instead of shirking the responsibility to create an inclusive range, Silva increased the shade range to 40 and absorbed all the feedback. When it finally came to releasing the concealers, Women's Wear Daily reports that Silva met with 14 influencers, including makeup artist Sir John (whose clients include Beyoncé, Serena Williams, and Normani) to make sure the brand put out a product that did not disappoint this time around.

You can snag the Bounce Airbrush Liquid Whip Concealer right now in Sephora stores or online at sephora.com and beautyblender.com. Or, get a better look at the multi-use product below and figure out which shades you'll be snagging.