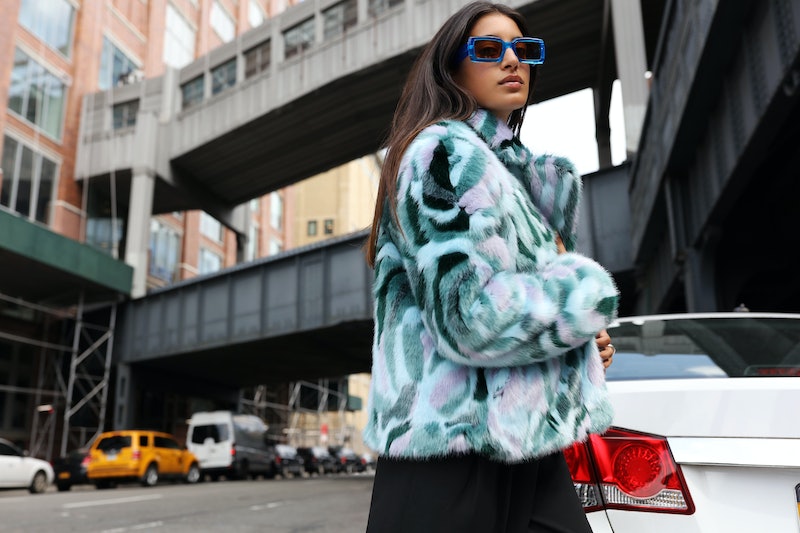 Buying real fur is mostly a thing of the past: The recent passing of legislation in California has made that abundantly clear. As a result, several designers that were once committed to the real thing are swapping out their pelts for more sustainable options and contemporary cult brands like, Apparis, are more relevant than ever; proving, once again, that yes, faux fur coats are in style. Known best for its plush designs meant for women who "want to live fearlessly," Apparis has fully established itself as one-to-watch with its luxe offering of vegan designs sold on the likes of Moda Operandi, Shopbop, and Bloomingdales.com. So its new partnership with Diane Von Furstenber, a brand that champions women empowerment through its iconic collections, comes as no surprise.

"As a fellow female-led and female-founded business, Apparis has made vegan products chic", the brand said in a press release. "Just as DVF's brand DNA is built around bold and colorful prints, Apparis similarly leads with a bold mentality." Launched earlier this week, The Apparis x DVF collection infuses its highly-coveted jackets with the wrap-dress mogul's signature '70s color palette, which resulted in a lineup that only confirms that faux fur coats are a great alternative to owning the real thing.

The lineup itself, has a little something for everyone. For those that don't typically gravitate towards vibrant colors, there's a beautiful longline neutral number, priced at $470, that features a psychedelic swirl pattern (which will go with just about anything in your closet). But there's plenty of color in the collection for those that want it — the hip-length green Tracy style, $455, and the oversized eggplant iteration, $370 are both a great places to start. Plus, the deep purple color also has the ability to double as a neutral.

Not for the faint of heart, the Citrine Paulette coat (also, $370) falls right in line with the season's penchant for bold citrus hues. But if you find yourself in the category of minimalists that would like to try the standout shades for themselves, the key to styling such a bold piece is (of course) to pair it back with solid-colored separates.

A vegan alternative to such an opulent seasonal staple, the collaboration provides the same luxe feel without the inevitable controversy that comes with wearing real fur and finally confirms that you can do so in style.

Look ahead to shop some of TZR's favorite styles the capsule has to offer, below, or feel free to peruse the collab in its entirety on both apparis.com and dvf.com, as well as, in stores.