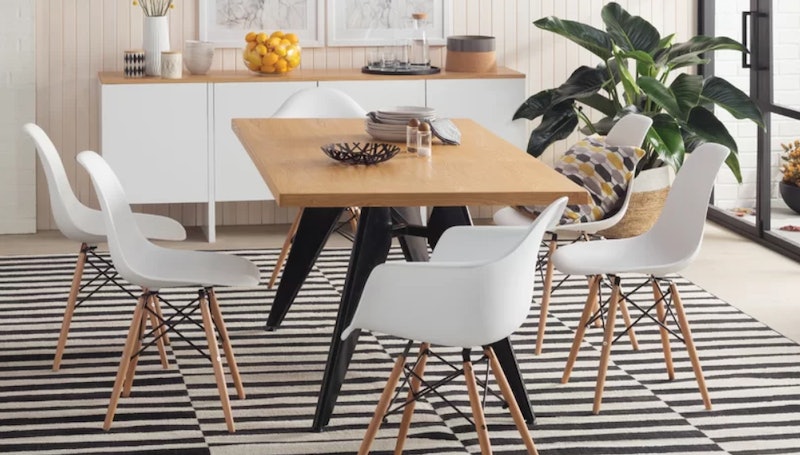 Contrary to popular belief, updating your space doesn’t have to require a complete overhaul. In fact, making a room feel completely new is as simple as adding a great area rug — a piece that's often overlooked despite its ability to easily transform a space and pull it together. Understandably, the price of an area rug might make you hesitate when you're redecorating — they're often considered an investment piece, and can easily run into the high thousands. That's not always the case, though, and the proof is in AllModern's rug sale, which is currently chock full of hidden gems that clock in well under $150.

From now until Feb. 18, the home destination is running a major sale on rugs, offering up to a whopping 70 percent off some of its best pieces. Within the markdowns are standout styles ranging from natural jute to colorful patterned rugs, all of which have their prices slashed significantly.

If you're looking to brighten up a room, the first rug you should take a peek at is the Burrillville Hand-Woven Area Rug, now marked down to $147.99 from $379.05. The white, jute rug will bring lightness to a dark space and provide enough texture to give a room both warmth and dimension. For those shoppers who don't want to go quite as light on their floors, opt for the tan Gaines Power Loomed Natural Area Rug, which has racked up more than 6,000 5-star reviews. Regularly priced at over $400, the rug is now marked down to $149.99.

Of course, there's nothing like kicking off your shoes after a long day and stepping on to a soft, plush surface. For $130.99, you can treat your space and your feet to the Connie Slate/Ivory Area Rug; the soft gray and white pattern on this style will elevate any room. An all-gray space isn't for everyone though, in which case you might like this Tibetan-inspired blue and orange rug more. The eye-catching style will look just as nice with a cream couch as it will with a navy velvet sofa, and is only $133.99 during the sale.

The right rug can make all the difference in your space, and doesn't have to cost an arm and a leg. Continue scrolling to shop nine stylish rugs on deep discount, and head over to the site to view even more.

During the sale, you can bring the playful fringe trim on this rug into your home for $41.99.

During the sale this sophisticated style is marked down to $130.99 for a limited time.

Add a little southwestern style into a space with this rug, now on sale for $126.99.