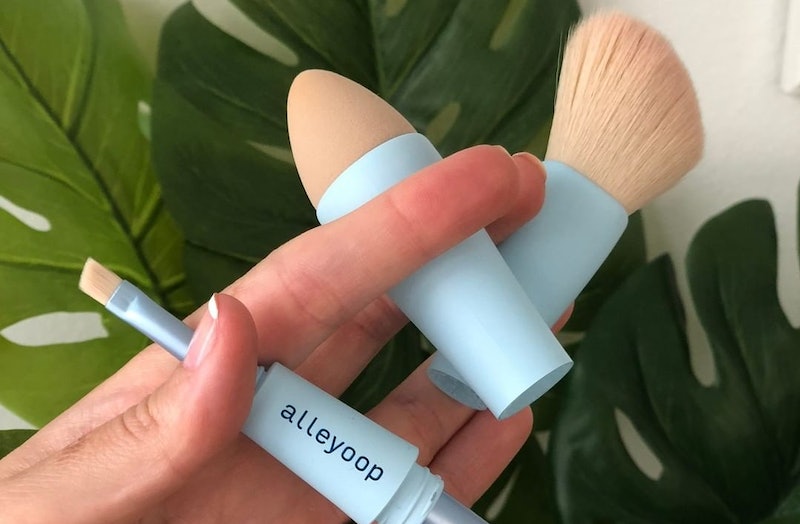 Attention, beauty shoppers far and wide: After two months of patiently waiting, Alleyoop’s Multi-Tasker brush is finally back in stock. Again. Since, as fans of the innovative makeup brand will be quick to tell you, this wasn't the first time that the four-in-one makeup brush — more on that later — sold out.

But first, here's everything you need to know about the restock. (After all, the Multi-Tasker brush sold out in just 15 minutes on Feb. 24, so time is of the essence here.) Offering a concealer sponge, blush brush, brow brush, and eyeshadow brush in a single, sleek form, the award-winning Multi-Tasker is available on Alleyoop's website as of April 23, and retails at $24 a pop. If you happened to pre-order the brush while it was sold out — and a whopping 10,000 shoppers did — your order will be automatically processed.

So, why all the hullabaloo about a makeup brush? As mentioned before, the Multi-Tasker brush isn't just one makeup brush — rather, you can remove the larger, cruelty-free brush on one side and latex-free sponge on the other to reveal the two hidden tools tucked away inside. Chalk up the cult status to its speedy nature (less searching through your makeup bag), space-saving function (less brushes to lug around while you're on the go), and affordable price (four brushes for $24).

Three things Alleyoop is known for at this point. Since launching back in 2019, the brand has released a veritable greatest-hits album for beauty fans short on time but big on style: Clock the All-In-One shower-free razor ($15), four-in-one Pen Pal makeup pen ($25), and Stack The Odds complexion trio ($32).

Though for the time being, it's alright if your eye is on the prize — aka that previously sold out brush. You can pick up your own Multi-Tasker on Alleyoop's website; just keep scrolling down to shop.