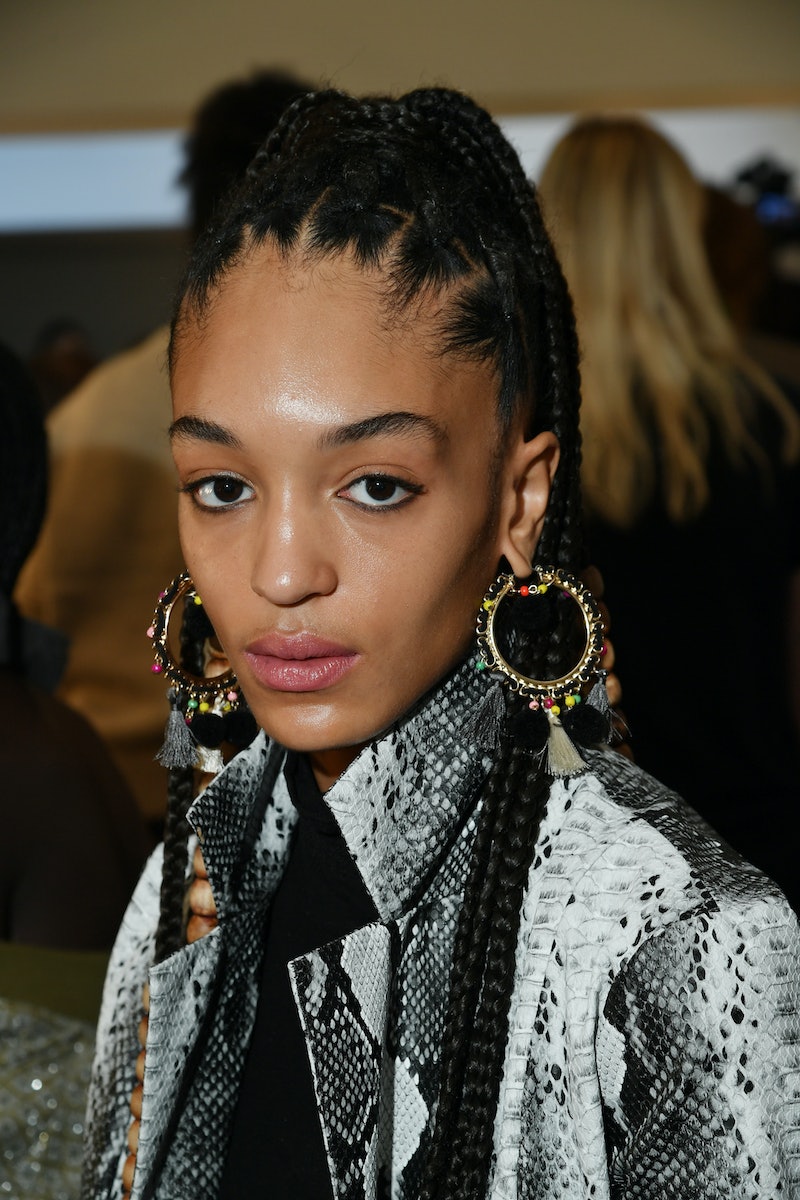 New York Fashion Week is officially a wrap, and while most of the clothes might not be readily available, there's no reason not to experiment with makeup ideas from Spring/Summer 2019 runways immediately. The best looks are easy to emulate using products you already have at home — red lipstick, brow pencil, lip balm. Nothing complicated. Here, five easy-to-execute makeup ideas you'll want to incorporate now, and all season long.

Get the look: Both designers sent girls down the runway with full, fluffy "virgin brows," but the truth is both looks got a boost from strategic brow fillers. Backstage at Brandon Maxwell, makeup artist Tom Pecheux cites a young Brooke Shields as the reference, a look synonymous with mega-brows. "I like to draw the perfect eyebrow, and then after, I use a Q-Tip or a brush and then I brush it around to create imperfection," Pecheux explains.

At Dion Lee, makeup pro Erin Parsons gave the girls a boyish rendition of the virgin brow, which meant neutralizing any discernible arch. "We just did hair-like strokes, and then brushed brows through," Parsons says backstage. "If they have a lot of arch, you don't go on top of the arch, you brush the hair down. It just makes it more boyish and more straight across."

Get the look: Not to be confused with no-makeup makeup, sporty skin isn't about creating the illusion of a bare face. The look is sexily lived-in — even a little sweaty — like your skin after yoga. At Prabal Gurung, the designer wanted models to look fresh and dewy, so makeup artist Diane Kendal simply evened out skin before pressing highlighter into cheekbones, down the nose, and above the cupid's bow. And here's the bit you'll want to adopt: On top of that, a few dabs of lip balm on top, "for that really glisten-y effect," she says.

Get the look: At Escada, makeup legend Pat McGrath emphasized '80s elements in the collection by giving models ruby red lips. To make it modern, McGrath didn't stress precision. "It's defined but not in a hard graphic way," she says. "But definitely not feathered." Her team skipped lip pencil, instead applying pigment directly too lips. The lips at Veronica Beard followed a similar ethos. Makeup artist Mariel Battera layered two shades of red to create depth, for an effect that was neither matte nor glossed, but a sweet spot in-between.

Get the look: If contour is Instagram, then blush is real life, and that realness is exactly what makeup artist Gucci Westman was looking to capture backstage at Brock Collection, where she debuted her new makeup line. Westman gave the girls "warm, glowy" cheeks using a combination of blush shades. "I'm doing a tight C-shape, a backwards C that follows on the lid and envelops the cheek in a horizontal fashion," she explains.

Get the look: Proof that glitter isn't just for holiday season. Models at Kate Spade wore a constellation of gold particles across their lids, while Tadashi Shoji doubled down on the bling-y look with two-tone glitter pigments swept up towards brows.