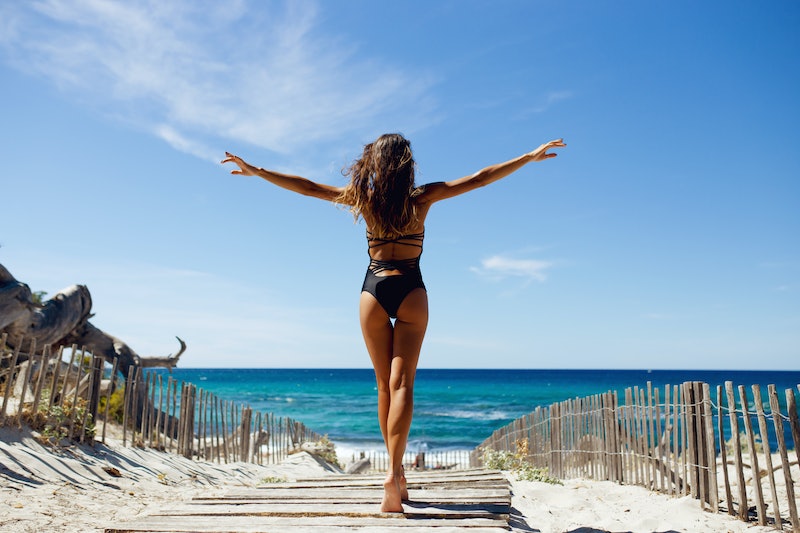 According to the American Society of Plastic Surgeons (ASPS), 24,000 Brazilian Butt Lifts (BBLs) were performed in 2018 – an increase of 19% over the previous year. Since then, those number have continued to rise as more and more women and men are on the hunt for an hourglass shape, complete with curvy hips and a robust butt. "A BBL is a buzzword to encompass a fat transfer and body contouring procedure where we liposuction one part of the body — usually the waist and stomach — and safely re-inject it into an area that we want to improve volume in," Dr. Sachin M, Shridharani, MD, FACS, New York Board-Certified Plastic Surgeon says. "In this case, we add to the butt and the outer hips to give patients a more sort of voluptuous and curvier type of look." But when you consider the downtime, which can range from four weeks to six months, finding a less-invasive alternative to a BBL may be more realistic for many.

And while the procedure has proven to deliver on what it's promised (see before and after imagery below), it does involve quite a bit of downtime. The surgery, which Shridharani says usually starts around $10,000 for a quality doctor, definitely won't have patients moving around right away. "Downtime for a BBL is basically two parts," Shridharani says. "You’ve got the downtime from liposuction and then the downtime from the injections of the fat itself."

The surgeon explains that, generally, the first week involves extremely limited movement and requires compression garments to support the injected fat. The second week includes what Shridharani describes as a soreness reminiscent of an extremely intense workout and, still, sitting on the injection sites is off-limits. After this uncomfortable period of time, the doctor says recovery is smooth sailing. "Usually after two weeks I’m typically reminding patients that they even had a surgical procedure because it might be a little bit swollen and [there might be] a little bruising, but they're in a much better place," he says. "By the time they're at four to six weeks, they're usually reaching full recovery. However, swelling is still present and will be for anywhere ranging from six months to a year."

That said, for some body types, particularly those with a smaller body mass index (BMI) a BBL may not be the best investment. "A BBL is best suited for someone who has significant flank fat," Dr. Erez Dayan, MD, Nevada board-certified plastic surgeon says. "You need that fat for reshaping and reuse for other parts of the body."

So whether you're fearful to go under the knife, don't think you're a good candidate, or just don't have a month or so to dedicate to recovery, check out five BBL alternatives that come pretty darn close to the real thing.

Alternatives To A BBL: Sculptra

Of the non-invasive alternatives, Sculptra arguably provides results most similar to that of a BBL. "Sculptra is a dermal filler different than the other fillers like Juvederm or Restylane," Shridharani says. "It’s a filler that is a bio-stimulator so what that means is, as soon as we inject it, it functions to stimulate the body to produce its own natural collagen." The injections create a breeding ground for increased body tissue production, over time creating curves. "You typically get a few years of longevity out of it," Shridharani says. "However, you’re relying on your own body to produce collagen over a period of several months to create that effect so it’s not an immediate like other fillers. Most patients can get a year and a half to two years. Some patients have even gotten up to three years plus out of the injections."

Additionally, Sculptra is a great alternative to slimmer women who don't have an abundance of fat stores for a transfer. "Everyone has a little fat, but it’s not always enough to justify surgery to get that fat and transfer it," Shridharani says.

Downtime: None. However, a little swelling and bruising post-treatment can occur.

Alternatives To A BBL: Emsculpt

Through high-intensity electromagnetic surges, intense contractions that cannot be achieved naturally strengthen the muscles. "We know that if we improve the muscle mass of the butt then we can also get improved muscle definition," Shridharani says. "Treatments like Emsculpt, which contract muscles in a way that wouldn't be possible otherwise, create volume and structure of the butt making the area more pronounced." Doctors suggest four to six 30-minute treatments spanning three weeks, occurring ever two to three days for results.

Alternatives To A BBL: Cool Tone

Unlike CoolSculpting which freezes and kills fat cells, CoolTone uses Magnetic Muscle Stimulation (MMS) technology to tone and firm the muscles of the abdomen, buttocks, and thighs, making the body appear more curvaceous. The fairly new treatmen from Allergan, which delivers results immediately, requires two to three treatments for long-lasting results. Like Emsculpt, Cool Tone is achieved through electromagnetic plates being applied to the desired region.

Alternatives To A BBL: Skin Plasma

"Skin plasma tightening basically uses helium-based plasma with heat to create a nice tightening effect underneath the skin," Shridharani says of the treatment that applies plasma to the epidermis, generating heat and removing oxygen. "Sometimes patients are looking for a rejuvenated look and they have some loose skin they want to get rid of. We’ll start by doing skin plasma, tighten the skin, and get them a little minimally invasive lift of the butt using Sculptra. Then, with the tighter skin around the butt and the hips, we’ll use more Sculptra to volumize it. It's one of the newer treatments." The results of skin plasma are visible almost immediately.

Downtime: None (unless paired with invasive body contouring like abdominoplasty, also known as a tummy tuck.

In many cases, simply minimizing the size of the waist creates the illusion of a larger butt. That's exactly what BodyTite, also known as EVOLVE Tone, does — without any surgery. "This harnesses the power of EMS (electrical muscle stimulation) to induce muscle contractions," Dayan says. "EVOLVE Tone targets specific muscle groups like the buttox to increase muscle strength and refine the look of muscles, without downtime. Results appear within four to six weeks and three to five treatments every two weeks are recommended for best results."