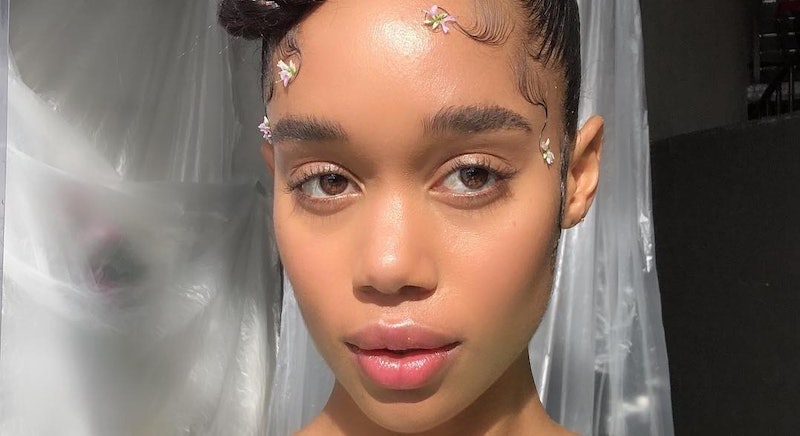 Before you know it, spring will be here to breathe new life into everyone's hair routines, offering some much-needed relief (and much-needed moisture) from winter's icy wrath. With a change in the weather, you might find yourself resisting the urge to do something drastic with your mane — but don't fight the feeling. As far as natural hair ideas go, March is the perfect time to get ahead of the curve by brainstorming your next move and actually switching things up well before summer.

Whether that means a color change from dark to light, a sharp cut, a trending protective style that frees up more time, or all three — there's tons of options and room to get creative. "When talking about trends, I always say the same thing. I think [hair] is a way to express yourself," celebrity colorist Christophe Robin explains to The Zoe Report. "People want things that will suit them, enhance their features, and be very much part of their personality."

Aside from Robin, take it from a few of Hollywood's hottest celebs (like Laura Harrier, Beyoncé, and Kerry Washington) who constantly prove just how versatile natural hair truly is.

Craving inspiration? Keep scrolling to see the looks that had the world staring.

And Zendaya, a newly-minted Lancôme ambassadress, opted for a shorter iteration.

Janelle Monàe's "hat," also done by Nelms, made out what seemed like a zillion safety pins was the perfect accessory to her braided ponytail.

Side Braid With Swirls

Laura Harrier's side plait got a chic update, courtesy of her intricately-laid edges (done by Nena Soul Fly).

And the baby hair magic continued on, with a special edition: flowers!

If you don't want your hair elastics to show, wrap a few strands around the base of your ponytail for safekeeping (like Kelly Rowland did).

I don't think I can handle the simple elegance of this pretty low bun, secured by bobby pins.

Justine Skye took things back to the early '00s with cropped, feathered bangs and flips.

If you need a chic, new straightening iron to style your hair on a regular basis, this is it.

Cardi B wore several illustrious hairstyles during the Grammys... but this nineties-inspired bun adorned with pearls definitely went for the gold.

Thanks to curl queen and stylist Nai'vasha Johnson, actress Amirah Vann hit the New York Fashion Week scene with not a single strand out of place.

Ashanti kept her ombré hair pinned back and tucked behind her ears for the 2019 Grammys.

Actress and new musician Danielle Brooks commanded attention on the 'gram with her sharp cut.

Grammy award-winning singer Ella Mai's edges were the center of attention when she arrived.

Alicia Keys, who hosted the 2019 Grammy Awards, wore a pretty low ponytail so that everyone could see her (flawless) face.

Grammy Award-winning musician H.E.R. accented her curls with a center part of clear stones to match her dazzling jewelry.

Gabrielle Union showed off a sleeping baby Kaavia and her new rich auburn brown 'do for Instagram.

The secret to shiny, sleek hair is hiding in your nearest drugstore — and it won't cost you more than $6. So tackle frizz and those pesky flyaways with just one pump of this game-changing serum.