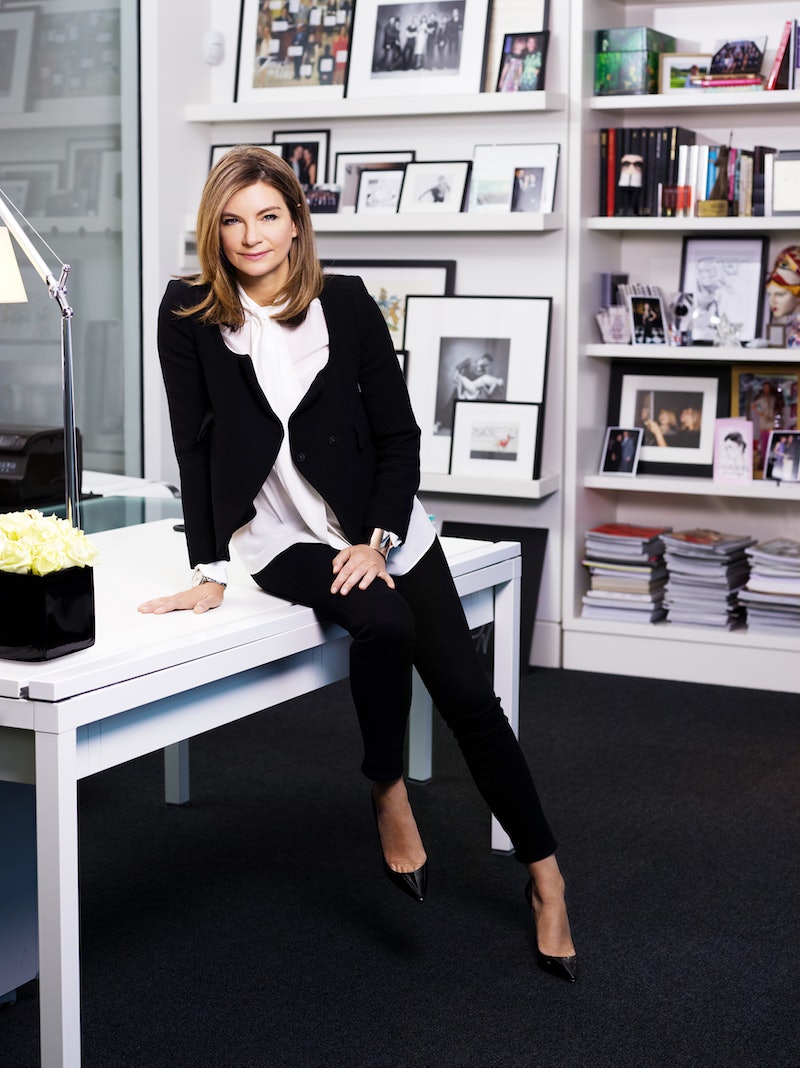 Natalie Massenet, the woman behind one of the most well designed, expertly curated, editorially rich shopping sites around, a.k.a. Net-a-Porter, is our fashion hero. Not only does her love of dangly earrings run deep (co-sign), she’s also an incredibly brilliant business woman, industry leader (she’s the chairman of the British Fashion Council) and mother to two gorgeous kids. Today, for our latest installment of Women of Style, the fashion visionary shares a few career lessons and style mantras.

Growing Up In California

"Even though I'm half American (other half British), I spent my childhood in Paris before moving to LA and so I was thought of as “the little French girl” for a while. I shook that off eventually and embraced being American during high school. I lived with my father and my grandmother, Florence, and my Great Aunt Hazie during that time. They wore cat-eye glasses, had silver hair and drove a 65 Chevy Bel Air. They were a big part of my upbringing and I often think of them. I am sure I surprised them a bit with my work ethic, because at the time I wasn’t very convincing with my messy room and days spent at the beach with my surfer boyfriend."

"My first job was the summer between high school and UCLA at the Beverly Center in a men’s clothing store called GHQ. I used to work there with an aspiring singer Romeo Blue – who I drove to work in my yellow Honda Civic. He later assumed his real name; Lenny Kravitz."

Lessons Learned From Working In The Print World

"Journalism teaches you about getting the “scoop” – getting the news before anyone else and then telling the story in words and pictures. This is a skillset that can be so useful as an entrepreneur; getting to the new idea first, then selling the dream. In the print world, I also met people who would become friends and contacts for life."

Always be nice to everyone; you never know where they will turn up. And, at any event, just be nice.

What Inspired Her To Launch Net-a-Porter

"I was freelance and had time to dream. I had a lot of ideas and was watching the internet bubble grow and suggested to my friends who had fashion businesses that they should sell online. When they didn’t get it, I thought someone had to do it."

Milestone Moments She's Most Proud Of

On Her New Magazine, Porter, Being Different

"It’s one magazine for a global reader – whether they're in Hong Kong, New York or London; it’s shopable from the editorial to the ads, and comes complete with a concierge service powered by Net-a-Porter; and it is edited by Lucy Yeomans, one of the best editors of her generation who gives the magazine intelligence, style, and charm."

"I have always been inspired by Anna Wintour. She represents the intersection between the dream of fashion and the commercial viability and vision."

"I have learned on the job over the last 14 years and Mark Sebba, the CEO of Net-a-Porter, has been my teacher."

"And as a mentor, I look to Angela Ahrendts."

What She Looks For In An Employee

Natalie with her team at Paris Fashion Week. Photo: @nataporter.

"An interview candidate should always look presentable and professional but other than that, they should wear what they want."

The Outfit She's Most Comfortable In

When She Puts On When She Wants To Feel Glamorous

The Fall Trend She's Excited About

"The mod boots as seen at Gucci and Saint Laurent as well as capes."

"Eve Lom cleanser, Charlotte Tilbury makeup – all of it, Jean Louis Sebagh (the man and his products), and musk oil by Kiehls."

How She Unwinds After A Long Day

At home in London. Photo: @nataporter.

"Sweatpants, a cozy t-shirt and a cashmere sweater. Cooking with the kids in the kitchen, having a glass of wine, hiding the phone and watching property TV."

How She Balances Work And Family

Natalie with her daughters. Photo: @nataporter.

"I don’t prioritize anything else. When I am at work, I work, when I'm home, I'm home. Weekends and holidays are sacred. We entertain at home as well and include the girls as often as possible."