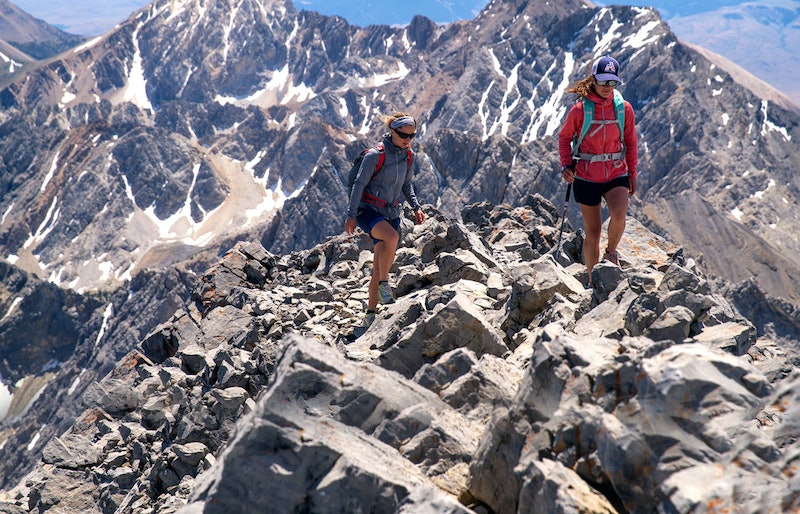 A few weeks ago, I had the privilege of summiting Mauna Kea in Kona, Hawaii, with two of the most inspiring young women I've ever met. The climb was revelatory for me—here's why.

One of the women leading me up Mauna Kea is 32-year-old Melissa Arnot, an Eddie Bauer Climbing Guide and the first American woman to summit Everest without supplemental oxygen—you may recognize her from her Surface Pro commercials, as Microsoft is one of her sponsors. She makes her living as a mountain guide, though she's not necessarily what you'd expect of someone bearing that job description—Melissa's petite, feminine and sprightly in nature. The other equally tiny firecracker-of-a-woman blazing the trail ahead of me is Maddie Miller, a 19-year-old who, on this very day, will set a world record by completing the 50 Peaks Challenge, also known as the Highpoint Challenge, in 41 days, 16 hours and 10 minutes, beating the all-time speed record of 43 days, 2 hours and 8 minutes. This endeavor has involved summiting the highest points in each of the 50 states, which, to reiterate, she has done in just 41 days. (To put this into perspective, the only major thing I've ever accomplished in 41 days is a Game of Thrones marathon.) Melissa joined Maddie for all but the first peak—Denali in Alaska—as she needed time to recover from an injury sustained on Everest.

Melissa and Maddie have known each other for years, and when Maddie graduated from high school, her father enlisted Melissa to guide her up Mount Rainier. "Rainier really changed my life," Maddie says. "Climbing suddenly became a focal point for me because it made me feel whole, and it made me feel like my life had a purpose." Next, the duo climbed Mount Borah in Idaho, at which time Melissa mentioned to Maddie that in doing so, they had summited two of America's high points. She brought up the Highpointers Club and told Maddie she knew people who had tried all 50. Immediately they made a plan to attempt the feat together. "If I was going to do the 50 high points, the only way was to do them really fast, as a challenge," Melissa says. Maddie was on the same page, and so they began to plot the course.

If this sounds like a difficult feat, it is. I can't even imagine visiting 50 states in 41 days as a tourist, let alone climbing their tallest peaks in the process. Sometimes the girls would take on as many as four or five states in one day. "Some [of the climbs] were drive-ups that took around an hour, and some were really long hikes, like 40 miles," Arnot says. "Many were 20-plus miles long." Though often grueling—and accomplished with somewhere between one and five hours of sleep per night—the actual hiking and climbing wasn't the hardest part of the journey. Melissa and Maddie say it was the logistics that nearly broke them. "It's not like navigating to a Shop 'N Save," Melissa says. “We were following crazy roads and dealing with traffic, road closures and trailhead closures. Plus, some peaks are on private property, so you have to get permission from the landowners. Some require you enter a lottery to be granted admission. And a lot are in parks that have business hours, so if you arrive at 10pm, you may not be allowed in, which causes you to lose time." She adds, “People might say to me 'You climbed Everest six times, so this challenge is no big deal.' But this was way harder than climbing Everest. Not physically, but emotionally. The logistics of doing this in less than 50 days were insane. It was the craziest thing I’ve ever done in my life."

Mauna Kea is the last high point of their journey, and I join them for a drive-up hike (we drive most of the way, then hike the rest). I'm in pretty good shape, but we're at 13,000 feet and I can definitely feel the altitude. As Maddie and Melissa float to the peak, I pause to sit down, dizzy and nauseous from altitude sickness. Though anxious to claim Maddie's world record, they pause with me for a pep talk, and we continue on. Once at the top, there are tears as Maddie engages in her usual summit tradition of singing the national anthem. It's an emotional moment for all those involved—Melissa, Maddie, their team, Maddie's family (who've also joined us for the final hike) and us, the voyeur journalists panting for breath after attempting one-fiftieth of what these women have just accomplished. As I watch them embrace in victory, I feel something I hadn’t expected to feel: jealousy.

Later, talking to Melissa and Maddie from the comforts of a hotel—the first comforts they've had in over a month—I unpack this feeling with them. I mention that I'm inspired to figure out what my 50 Peaks is, as it's been a long time since I've worked really hard for a singular goal—possibly since high school. "When I was climbing Everest," says Melissa, "I was reading Ronda Rousey's book My Fight/Your Fight, and I think she articulates that really well—the feeling you get from winning is something adults don't get to experience outside of high-school competitive sports." Yes! That, I realize, is exactly what I'm envious of—as a girl, I was a competitive dancer, so there was always a win to work toward. As an adult, wins have been more difficult to find. I voice this sentiment, and Melissa agrees: "Even for us, it's been hard to make people understand why we're doing what we're doing, because it's an abstract win. But, it doesn't really matter why. It just matters that we set a goal, we dreamed a dream and we took steps to actualize that and make it happen. I have not achieved so many more goals than I have achieved, so it's really cool [for Maddie] to have this be a huge first goal in her adult life, and have it not be easy, but achieved." Says Maddie: "I'm so thankful we had the rough moments, too. It paid off. It was all worth it. Even if we hadn't achieved the goal, I would feel that way." Melissa concurs: "Achieving the goal is only one minute of the whole process."

Melissa later tells me she knows that climbing isn't for everyone, but she hopes her endeavor with Maddie will inspire others in the way it has me. "I don’t think everyone wants to climb the high points, nor should they, but I think you might decide to do something more you that will give you the same sense of achievement," she says. "And it doesn't have to be competitive. Someone said to me that they love yoga, so maybe they'll love climbing. I was like, 'But if you love yoga, do yoga. Pick 10 great places in the world where you want to do yoga, and go and do that.' It doesn't have to be on a timeline. You'll get gratification just knowing you set a goal and you achieved it."

"Whatever your goal is, the first step is the most important."

She has a point—it probably makes the most sense for me to get what I'm now calling my "win fix" from something I'm intensely passionate about, potentially involving dancing or writing as opposed to climbing. (That said, I do plan to climb a small section of Everest with Melissa in the spring. You can learn more about climbing with her here.) Melissa advises, "Don't be afraid to take the first step. So many people say, 'I could never climb Everest,' but sitting at this table, neither could I. I took a first step to get to that place, and then another step to get to the next place, and ultimately it's a lot smaller than it is big. You just take it one day at a time, and pretty soon you amass a goal. I think that's the thing. Whatever your goal is, the first step is the most important."

Based on what I've witnessed here in Hawaii, I'd say there's a lot to be gained from setting what may feel like arbitrary challenges for ourselves, whether they be mountain climbs, marathons, the learning of a new craft (e.g. how to play one song on the violin) or the mastering of an academic goal (taking the GMAT). Maddie agrees: "Melissa has taught me that you can be the master of your own destiny, that you can set goals like climbing the 50 US high points and being the fastest in the world. This experience has taught me that I can do whatever I want, in the entire world. I can be a big presence."

Consider me inspired. What's your version of Melissa and Maddie's #50PeaksChallenge? Leave your ideas in the comments below, or try our 31-day transformation challenge here.