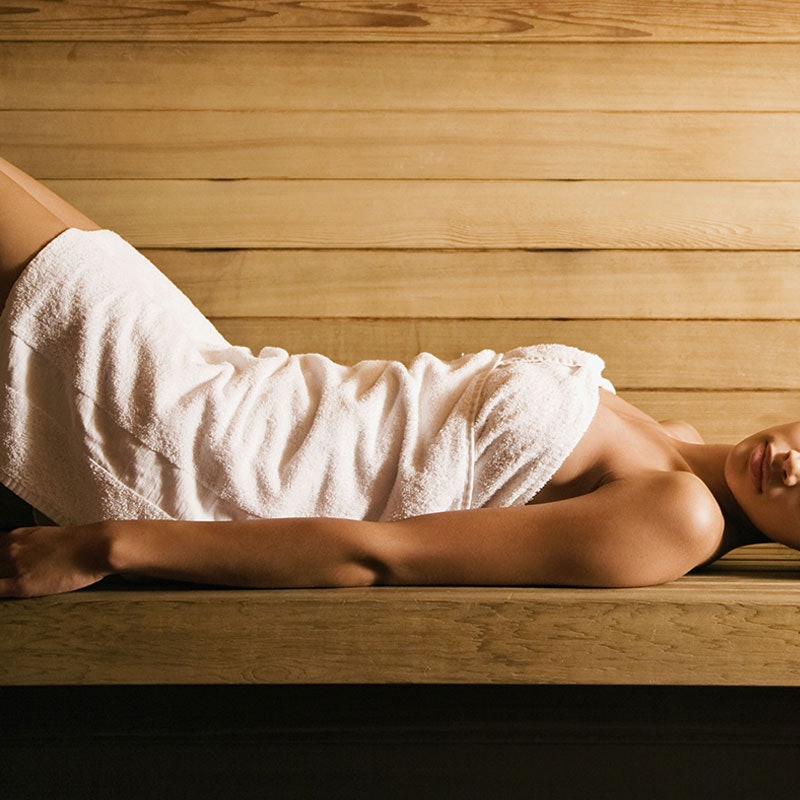 Not long ago, Selena Gomez made "burrito sweat beds" a thing when she told Elle that regular visits to the Shape House Urban Sweat Lodge—where they wrap you in a blanket and nuke you with something called far-infrared technology, kind of like a New Age burrito—had transformed both her skin and her body for the better. Since we all want to be Selena Gomez (or is that just me?), I decide to investigate. After all, Shape House sessions purport to burn 800 to 1,600 calories while you lie there watching Netflix, which is basically the dream. What's more, sweats are alleged to help you sleep better, and as a chronic insomniac, I would agree to become an actual microwavable Mexican delicacy if I thought it would knock me out for a night. Ahead, find out what happens when I follow Selena's lead and try a Shape House sweat.

What Is An Urban Sweat Lodge?

As far as we know, sweat lodges have their origins with the indigenous people of the Americas, who would partake in ceremonial steams by pouring water over heated stones. Other cultures have used sweat therapy—without the rituals surrounding it—for centuries as well.

Shape House has updated this practice for the busy, modern woman by using far-infrared technology to induce sweating in a controlled setting over a set amount of time (55 minutes). From the Shape House website: "Our specially designed beds emit far-infrared energy waves at a level of 9.4 microns, which induce deep-penetration sweating. Far infrared is a form of natural light just beyond the visible spectrum, meaning that although you cannot see it, you can feel it in the form of radiant heat. Not to be confused with ultraviolet (UV) light, infrared energy is a safe, healthy therapy for all living things." If you're interested in learning more about how a Shape House sweat differs from that of a sauna or steam room, read here, but otherwise suffice it to say that far-infrared sweat beds have been shown to yield 20% more toxin release than other sweat methods.

Prepping For The Sweat

I get dehydrated abnormally easily, so I arrive to my appointment in a severe state of anxiety, positive that I'll have to "pull my parachute" within minutes of starting to sweat. I voice this fear to the kindly Shape House employee tasked with guiding me through the process—let's call her Jane—and she insists that she's never witnessed anyone abandoning her sweat session in a panic. This makes me feel only moderately comforted, as I have fainted on more than one occasion on which others would not and really don't want to go down in Shape House history as its first failure—but in an attempt at being a good sport, I chug the last drops from my water bottle and hope for the best.

Apparently, you're supposed to wear something that covers most of your body—long sleeves, pants and socks—for your sweat session. I didn't know this, so I have to borrow the really sexy orange shirt and oversize blue sweatpants they provide for idiots who do no research outside of a one-paragraph celebrity endorsement in advance of signing up. As I dress, I try not to think about where the clothes have been before me.

Inside The Burrito: The First 30 Minutes

After I change into someone else's secondhand sweat gear, it's finally time for the burrito bed. Jane places a bottle of water on the table beside me, tells me to lay down, and proceeds to wrap me up in what looks like a space blanket. She must see the fear in my eyes, because she assures me that I can remove my arms—or any part of my body, really—from the blanket at any time. I'm dubious.

Next, she asks me if there's anything I want to watch on Netflix. I opt for Chelsea Handler's new show, because it's amazing and if you're not watching it, you should be ASAP. I figure the 55-minute session will go quickly if I'm hanging out with my imaginary best friend Chelsea and her guest, love-of-my-life Blake Shelton.

For about 15 minutes, I'm totally engrossed in my favorite cowboy and his adorable twang. Then, I start to get uncomfortable. Not sure what to do, I pause the show to see how much time has passed, extricate one arm from the burrito to drink some water, give myself a mental pep talk and resume burrito-ing and Shelton-ing as beads of sweat began to form on my brow.

Fifteen minutes later, the first episode of Chelsea ends and I'm dying. I've checked the clock every three minutes, hoping that the 30-minute show has somehow lasted 55 minutes and that someone will be coming to rescue me from the burrito shortly. No dice. Just as I'm about to scream for help, Jane appears to place a lavender-scented cold towel on my forehead. Never has a simple wet washcloth felt so heavenly, though this may be in part because I'm hallucinating and Jane now looks a lot like Blake.

Inside The Burrito: The Last 25 Minutes

My relief is short-lived, however, and the last 20 minutes of my sweat are absolutely brutal. To cope, I remove my hand from inside the blanket once more, chug the entire bottle of water, desperately rub the cold cloth all over my face and neck (note: It is no longer cold) and start a new episode of Chelsea. None of this works. Miserable and drenched in sweat, I curse Selena, Shape House and Blake Shelton (for not being my boyfriend, because if I had a boyfriend he undoubtedly would've convinced me that this urban sweat lodge thing is the dumbest idea of all time). Then, just as I think I'm going to pass out, it's over. Jane comes in and frees me from my blanket before sending me off to a quiet room to suck on oranges with a bunch of other dazed Shape House survivors. I made it.

You're not supposed to shower for a few hours after your sweat, so I drive home drenched. Or rather, I drive to Jack in the Box drenched, because it's 9pm and I'm suddenly ravenous. It's the kind of hunger you experience after (dare I say it?) a workout that's burned 1,000 calories, and it's urgent. (Otherwise, I would never deign to eat Jack in the Box. Swear.) Upon arriving home a few minutes later, I plop down on the couch, scarf my Monster Taco and Oreo shake, turn on Netflix and ... wake up nine hours later, on the couch. I passed the eff out. Just to give you a sense of how major this is, my insomnia is so bad that I have an elaborate bedtime ritual that must be followed to a tee if I have even the hope of sleeping for a few hours. The fact that I conked out in this manner is a minor miracle in my mind, and I become an instant convert. If I could afford it (I'm a writer, and sessions cost $36 to $45 each, so no) I would go to Shape House every night before bed. It's more effective than Ambien. (Not that I would know, but it is, trust me!)

The first (and only) negative side effect I experience occurs the next day, when I come down with a raging dehydration headache. Since then, I've been back and make sure to over-hydrate in advance—I still get a headache the next day, but it's not as bad as the first one. Meanwhile, on the positive side of things, I do feel a glow after each sweat session. My skin looks fresh and clean, my body feels healthy and energized, and I think if I ceased to eat Jack in the Box afterward, I'd definitely see the physical results advertised by Selena, Emma Roberts and other Shape House fanatics. Perhaps if I show some restraint in this manner, and therefore suddenly sport a six-pack, Blake Shelton will become my actual boyfriend instead of just my imaginary man. On second thought, I don't need a svelte physique to land the sexiest man alive (because feminism!). I just need to be Gwen Stefani. I'm not sure if Shape House can help me in that endeavor, but I plan to continue semi-regular sweat sessions regardless.