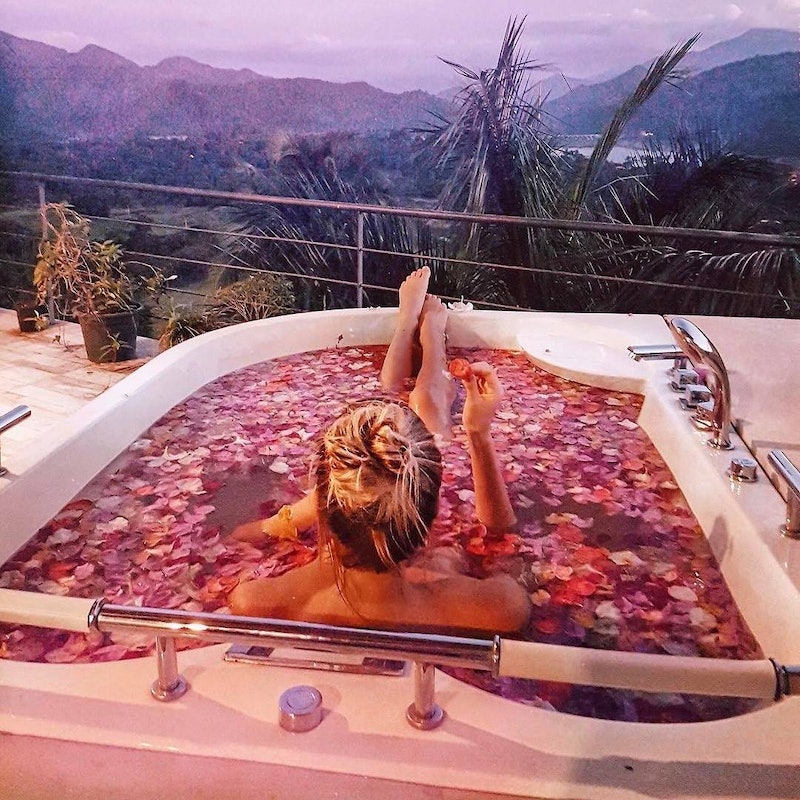 We don’t mean to be dramatic, but if someone told us we could have a perfect relationship for the rest of our lives or hot baths, we’d have a hard time making the call. There’s just something about submerging our exhausted, over-committed, desk bodies into a steamy tub that makes life worth living, even in the darkest of times. As enthusiasts, we’ve tried a number of variations on the tried-and-true bubble variety of bath that we think you should know about. Here, seven “extra” baths you probably didn’t know were a thing.

Sake baths are a Japanese tradition, and they're said to leave skin softer and brighter because of the kojic acid found in this rice wine. Test it out by pouring two 750-milliliter bottles of sake (or, try this Fresh Rice Sake Bath product) into a hot bath. We also suggest a third bottle, consumed orally (ha) for optimal relaxation.

Cannabis is said to have antiaging properties, and the antioxidants can also have a glowing effect on the skin. The plant can also help with conditions like psoriasis and eczema. Though a cannabis bath is not going to get you high, as of now you still need a medical license to buy such products. Actually, Whoopi Goldberg has a company that makes a cannabis bath product one editor swears by for reduction of her PMS symptoms. If you don't have a medical license, you can try CBD Bath Bombs (like this one) instead, which are perfectly legal and are said to make tub time extra relaxing.

Apparently, Madonna is a big fan of bathing in basil, as evidenced by a Coachella-week Instagram featuring a tub filled with greenery. Basil is said to help relieve aches and pains and reduce stress, but we never considered adding it to our baths until Madge showed us the way. Now, we're more incentivized than ever to start our own herb garden (read: think about starting an herb garden while soaking in the tub and watching Netflix).

Milk baths have a weird history—Cleopatra is famous for having soaked in the milk of 700 lactating donkeys and frankly, this is enough to pique our interest, given that the legend of her beauty has persisted over centuries. Ancient Romans and Europeans also bathed in milk, with the latter passing already-been-bathed-in milk from the upper classes to the lower classes, who then had to drink it. (This will probably happen to us with drinking water when it becomes scarce due to unchecked climate change, but that's another story for another day.) In any case, the thing about a milk bath is that it doesn't require you to soak in gallons of cold refrigerated milk. You can instead use powdered milk or, if you're interested in specifically trying donkey's milk (which is rich in lactose), it's becoming increasingly popular in soap form. Benefits include moisturizing, softening and soothing of the skin.

Matcha baths are said to have antioxidant properties, though, like most of the soaks on this list, solid scientific evidence of this is scarce. Still, it certainly can't hurt to add a little matcha or green tea to your tub—here, how to make your own matcha bath bombs.

If you had chicken pox as a child, you might remember your mom insisting you soak in an oatmeal bath in order to help alleviate the itchiness. The reason this works is that oatmeal normalizes pH levels in your skin. We love Aveeno's oatmeal bath products, but you can also just add a cup of plain oats to your bath for similarly soothing results.

Of all the bath-time additions on this list, this is the one we swear by the most: If you work out frequently, you should be up on the salt bath thing ASAP. Once again, most alleged benefits haven't necessarily been proven, but we swear that a good salt bath loosens and relieves stiff or sore muscles. Allegedly, salt baths also help to cure insomnia, which can be caused by magnesium deficiencies.