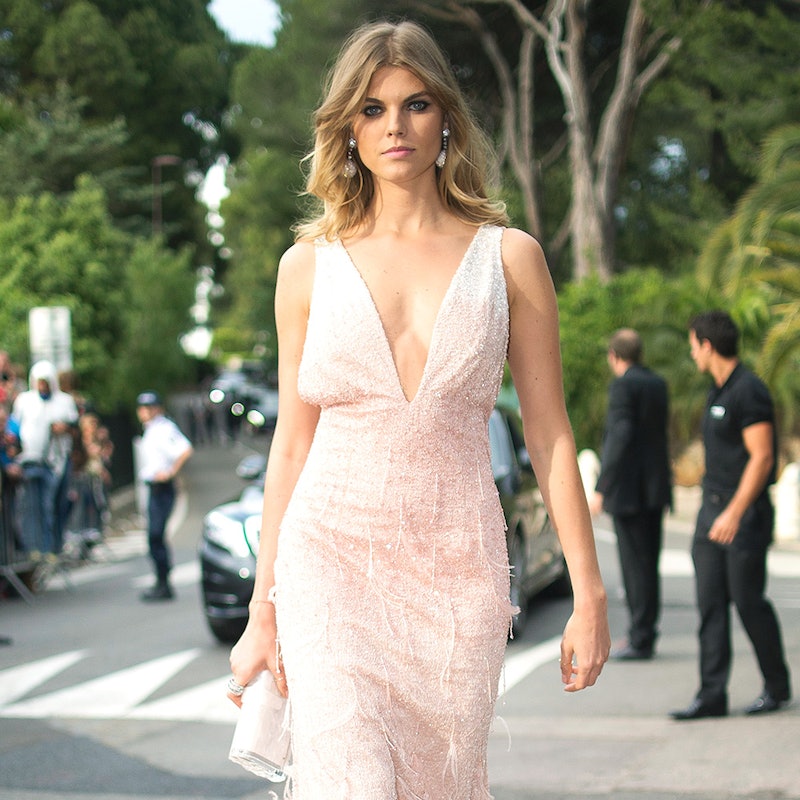 Next week, I’ll be traveling to my 2438290384th wedding solo for what is, sadly, not the first time. Somehow, even when I’m not single, I end up alone at weddings. Reasons for this include the following: the bride has a spouse-only policy; she doesn’t count my boyfriend as being “real” (because, in fairness, I tend to replace them fairly frequently); the guy I’m dating “can’t make it” for whatever reason (which sometimes results in his aforementioned replacement); and any number of other random occurrences that result in my attendance sans a plus one. Over the course of the last eight years, I’ve attended zillions of weddings (bridesmaid-ing at least 50% of them) and had zillions of boyfriends, and yet I’ve taken an actual date to a whopping two of these occasions, ever.

In the collective imaginations of everyone, everywhere, there is nothing more sad than a single girl at a wedding; however, when I complained to my married-with-kids co-worker about this phenomenon, her response was a surprising, “I’d cut off any one of my fingers to be able to travel anywhere, for any amount of time, alone.” This got me thinking about whether or not it’s actually that bad to attend a wedding alone. I am, after all, the girl who moved to Bali by herself. So, why do I look at the solo wedding experience as a negative, when I generally like doing things by myself?

There’s no escaping the fact that there are obvious downsides to attending a wedding alone. Here are a few I’ve experienced firsthand, to which you may be able to relate:

It tends to be more expensive than it would be if you were traveling with someone else, but only if your guest were paying their own way or splitting costs with you. Both of the times I brought a date to a wedding, I paid for the hotel room, which meant I didn’t save at all on accommodations; however, they ended up paying for a lot of the incidentals, so I still think I saved cash overall.

Everyone always tries to set you up with the one single guy at the wedding, even if it’s obvious you wouldn’t touch him with a 10-foot pole in “real life.”

The next day, everyone wants to hear the sordid details of the hook-up that didn’t happen with aforementioned single guy. If I’m single in my fifties, will my friends still expect me to get inebriated and go home with a stranger, just because I can?

"There is something about being alone at a wedding that makes you ache for a partner."

Your table is a crap shoot. Often, it’s what I like to call the “spare change” table, which usually involves some mix of random ex-coworkers, friends of the bride’s mom the bride has never actually met, and friends of the groom whom the bride does not like. This is a bummer mainly because your besties are probably all seated together with their husbands at another table.

Sometimes, you have to face an ex-flame and his new love, alone. Once, a guy I’d dated on-and-off for five years called me the day before the wedding to tell me that his new girlfriend was insisting on attending with him. This meant that I would have to be seated at the wedding next to a guy I was still in love with and the girl he was now in love with instead of me, while wearing the ugliest bridesmaid dress of all time, alone. Needless to say, I overindulged that night.

When you complain to your married friends about your solo status, they inevitably say things like “I loved going to weddings alone when I was single” which, if you’ve known them since they were single, you're aware is a total misremembering of reality. They didn’t “love” it anymore than you do, and these comments generally elicit an involuntary rolling of the eyes.

I don’t even think weddings are all that romantic—I’ve experienced tiny moments in my life that were far more swoon-worthy than 90% of the weddings I’ve attended, which tend to be more about pomp and circumstance than true love. Still, there is something about being alone at a wedding that makes you ache for a partner, no matter how cynical you are. This feeling, I’ve found, is somewhat inevitable, and it can be pretty lonely.

Most of the weddings I’ve attended have been for good girlfriends of mine and, especially when I’m bridesmaid-ing, this tends to be so fun that I don’t notice that the other girls have brought men while I haven’t. This is more true as we get older, since there are fewer and fewer occasions on which we can all get together.

I did, once, make a love connection at a wedding. That doesn’t make for great odds considering the sheer number of weddings I’ve attended solo, but it only takes one, right? We dated for some time, and he ended up being the guy that let me crash at his house post break-up when I was trying to save money to move to Bali.

Your friends’ boyfriends and husbands tend to feel sorry for you and assume it’s their duty to take care of you as they would their significant other. I’ve found this to be true at every wedding I’ve ever attended, and it’s allowed for a nice opportunity for me to further bond with these men, who I consider to be a part of my family.

Sometimes, you do luck out and find yourself among many singles at a wedding. Those in this group tend to become fast friends, and often engage in fun activities that those who are coupled up miss out on. At a wedding I once attended in Barcelona, for example, the single people partied every night until the sun came up. Those are some of the best memories of my life and, while the paired up people looked a lot healthier than we did by the end of the trip, I’m not sure their memories were quite as irreplaceable.

I considered pushing to get a date to the wedding I’m attending next week, but after much consideration I realized how nice it will be to do the weekend my way. As adults, we get such little “me” time that, as my coworker reminded me, it truly is a luxury.

Read More: How To Shop Like a Fashion Editor

How To Survive A Wedding Solo

Put your phone away. If you don’t, you very seriously run the risk of sad-texting a boy.

Drink in moderation. Or don’t, but you don’t want to prove all of those “oh look at the sad single girl” people right, do you? You’re not sad. You’re awesome, because having a significant other or not having a significant other changes zero percent about you as a person. And you’re even more awesome buzzed, but you’re probably a little less awesome blacked-out drunk.

If you hate your bridesmaid dress, bring something else to change into for the reception. You did your duty for the ceremony portion of the program, and now you deserve to feel good about what you’re wearing.

"Make new friends. Kiss a stranger. Use the occasion to fall back in love with yourself."

Remember, ultimately, that this isn’t about you. I had a friend who once made the entire wedding weekend about how she was single—it was even the focus of her speech. This made everyone uncomfortable, as the weekend was about the bride, not her. You’ll get your day if you want it, but this is not it, and so it’s not appropriate to make your discomfort the focal point of the weekend.

Go into it with a sense of adventure. One day, you will be the married-with-kids person who would give her pinkie finger to be able to spend a weekend—or even a night—alone. What will you wish you had done when you had the chance? Make a point of doing whatever that is. Be there for the bride more than your married friends can be, because you’re totally free to do so. Become the event’s unofficial photographer. Add an adventure that’s not on the itinerary into your personal agenda. Make new friends. Kiss a stranger (if they're cute). Use the sentimental occasion to fall back in love with yourself, because it’s probably a red flag if you can’t survive a celebratory occasion on your own given life is long and the future uncertain (whether you’re married or not). It's also short, which is why feeling sad for arbitrary, societally-dictated reasons at what is essentially a party is a tragic waste of time. Smile, put on your best dress, dance, and remember—those watching you have the time of your life solo likely see you as the real belle of the ball.