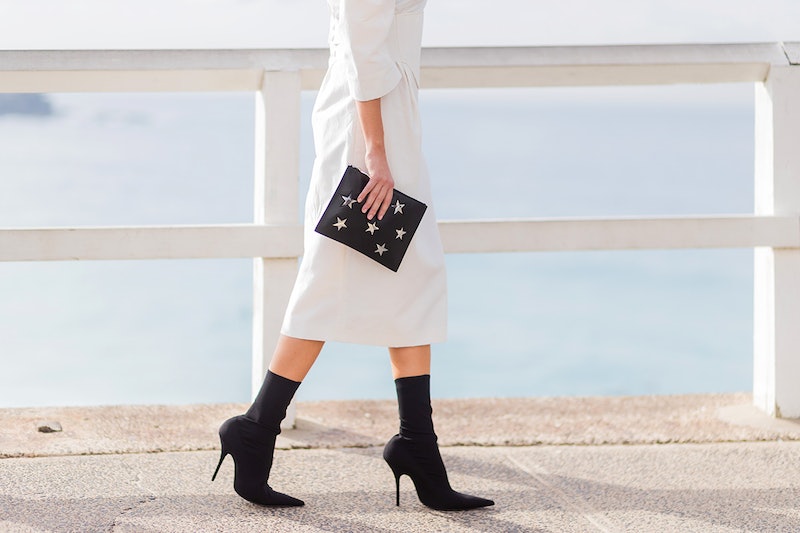 With this month’s new moon in Libra, it’s come to our attention that now is a good time for relationships. While we’ve already outlined the astrological signs that are best as partners, we thought—based on convos with our demoralized single girlfriends—you might be in need of some additional help in this department. (LOL, sad face emoji.) So, we tapped astrologist, Reiki master, sound healer, meditation guide and transformational coach Ambi Sitham of Alchemy with Ambi to help you out.

Before we dive into her thoughts on which signs to avoid (astrological signs, not warning signs, though you should avoid those, too), she hopes to disclaimer her advice so as to avoid hysterical breakups. “Our compatibility is based on so much more than just our sun signs. We should definitely be reading for our rising sign as well, and the only true way to know if you’re compatible is to have a synastry chart done, which explains all the different elements including your Mars, which is how you have sex, your Venus, which is how you love, and your Mercury, which is how you communicate.”

If you want to know more about any of the above, or for a personalized, monthly consultation, you may be the right candidate for Ambi’s Soulstrology services. In the meantime, read on for her best advice on who to avoid—and why.

Cancer: "Cancer's a water sign, and it's such a sensitive sign. While Aries is a bit more of an aggressive sign, their sort of fieriness and sometimes their aggression—their zest for life can almost be aggression—is just a bit too much for a sensitive Cancerian."

Capricorn: "Equally, a Capricorn is probably not the best sign for an Aries, because the Capricorns are a little bit more conservative in their approach to things. They're just a little more serious. And they can find, again, Aries' sort of fieriness and go-get-'em approach a bit too much."

Potential match: "Obviously there's a thing of saying, 'Oh, what's your opposite sign?' Because that's the sign that you need to balance yourself. In Aries' case, it would be a Libra; they're two opposites. So, between them you can find harmony, the balancing of different energies. But sometimes you could find that a peace-loving Libra finds Aries too aggressive, and an Aries finds Libra too airy-fairy for them."

Leo: "Leo is almost too full-on and brash for a Taurus. They're both stubborn signs. This can cause them to lock horns."

Aquarius: "This sign is just a bit too changeable. Taurus is slow and steady and likes stability. Aquarius is very prone to change."

Potential match: "The opposing sign for Taurus is Scorpio. Taurus and Scorpios can experience deep levels of attraction. Sometimes a long-term relationship can yield problems because of differences. Taurus is quite grounded, and Scorpio is very intense and deep."

Virgo: "Geminis find Virgos to be anal-retentive, too stuck on small details and too serious."

Pisces: Pisces is too otherworldly for a Gemini. Pisces is a water sign that can be very "out to sea." Pisces feel things, whereas Geminis articulate things verbally. Pisces may not get this way of communicating."

Potential match: "Gemini's opposite is Sagittarius, and Gemini and Sag is quite a good mix. They both have a zest for life, intellectual pursuits, travel, etc."

Aries: "For a Cancer, an Aries is probably not sensitive enough. They can fly into a rage about things, and they may not be emotionally sensitive enough for this gentle sign."

Libra: "Libras are very sociable, they can be somewhat changeable. Not that Libras are superficial, but sometimes they just like to chat to everyone. Cancer, meanwhile, requires a deeper connection, as they're more home-loving. So that can lead to friction in terms of how a Cancer-Libra couple's relationship would play out."

Potential match: "The opposite sign to a Cancer is a Capricorn. And that's an interesting one, because Capricorn is so different from Cancer. It's a sign that's all about ambition and success, and they're a bit more emotionally detached. Sometimes that can bring a lot of much-needed balance to the Cancerian, but sometimes it doesn't work because the Cancerian's emotional needs are not met, and the Capricorn just doesn't understand the Cancer's attachment to home."

Taurus: "These two share similar traits, like stubbornness. When you've got two stubborn people in a relationship, that can really make things tricky, which means that even if they're attracted to each other it might end up being that they can't actually have a long-term relationship."

Scorpio: "Leos and Scorpios are both pretty intense and full-on. Sometimes, two super-intense people are not a good combination—you need that slightly different energy."

Potential match: "Leo's opposing sign is Aquarius, and a lot of the time you'll read in astrology books that the opposite sign of an Aquarius is good for a Leo; however, Leos are actually very connected to their emotions and their thoughts. An Aquarius to them, at times, can be too detached emotionally and a bit too light. It can work, but that would be something for people to watch out for."

Virgos: "Virgos are very detail-orientated. Geminis look at things with such a broader perspective, which can feel a bit superficial for a Virgo. One looks at the small details and that's how their mind operates, and the other one's looking at bigger picture, without actually committing to the details."

Sagittarius: "A Sagittarius is larger than life, very expansive and has a real zest and a get-up-and-go attitude. But that could be a bit too much for the Virgo, who's more low-key and humble. So those two aren't the best match."

Potential Match: "Pisces is the opposing sign for Virgo, and if these two can work it out, it's a fantastic mix. Virgo is detail oriented and quite humble, whereas the Pisces is very dreamy, creative, and otherworldly, but also there's a sense of selflessness and love. So they both can very much serve each other in a relationship, but they would just need to iron out those little irritations."

Cancer: "The Cancerian, to a Libra, could be a wet blanket. Libra's about social interaction and socializing, and domestic Cancer likes to be at home."

Capricorn: "Capricorn is a bit too driven and serious for lighthearted Libra. They value different things. Libra values creativity and the arts and beauty, and Capricorn values more serious achievements. Capricorn's more of a business-, success- and finance-oriented sign."

Potential match: "Aries and Libra could end up having a really good thing, but they would both need to be aware of the shadow of each other's signs. And with Libra that is that they can be codependent and that will see Aries take over. And Aries would need to make sure that they weren't running the show in the relationship."

Leo: "Leo and Scorpio share some similar traits in terms of their big characters. You can feel their presence, as they're quite commanding when they walk into a room. And sometimes, too much of a good thing can be just too much. The traits that they share are what end up pulling them apart."

Aquarius: "Aquarians can be stubborn, and Scorpios can also be stubborn, willful and opinionated. Again, those similarities could end up pulling them apart."

Potential match: "The opposing sign for Scorpio is Taurus, which could be a great match. They're very attracted to each other. But it would need to be that the Scorpio didn't feel that the Taurus was really superficial, because the Taurus can be about the five senses, whereas the Scorpio really likes to dig deep and go underneath what is seen and what is felt."

Virgo: "A Sagittarius would probably think a Virgo is kind of boring. They would see Virgo's attention to detail, servitude and humility as a little bit blah. And it would put out their Sagittarian fire. So, they probably wouldn't go for them."

Pisces: "A Sagittarius would find Pisces to be a bit too wet and indecisive, and this would just dampen their fire and enthusiasm. Sagittarius likes to gallop ahead and do what they want, and Pisces can kind of float around going, 'Oh, maybe I'll do this, or maybe I'll do that.' That would clash."

Potential match: "The opposing sign for Sagittarius is Gemini. And these two can have a very stimulating relationship intellectually and in many other ways because they share passions for talking, learning and traveling."

Aries: "Aries is fast-moving and charges ahead. Aries wants to progress the relationship quicker than it ought to and will move too quickly, and Capricorn's like, 'No, slow and steady wins the race.' Like this slow-climbing goat, which is the sign of the Capricorn, climbing up the mountain and taking its time to do things in a very structured way. That's the problem with those two."

Libra: "A Capricorn can view Libra as being a bit too airy-fairy, superficial, not having much substance or structure and not appreciating things that a Libra appreciates. These two don't share the sense of what they consider to be of value in their lives."

Potential match: Capricorn's opposing sign is Cancer. And it can work, but Capricorn uses logic over emotion for relationship decisions. And Capricorn would find that Cancer was just letting emotions guide the way. Like all the opposing signs, they can mesh if they can integrate the yin and the yang to find balance, each adopting each other's traits in a sense."

Taurus: "Aquarius is a very changeable sign and will struggle with the rigidity of the Taurus. Taurus is a fixed sign, whereas Aquarius is very "Let's go and do this, let's go and do that." They're a bit out there. And that might make the Taurus a frustrating partner for them."

Scorpio: "Aquarius is very opinionated—they love a good debate, and so do Scorpios. And it could be that these two butt heads with their opinions and they're both too headstrong, and that might cause any potential relationship to fail. They may be attracted to each other, but they'd find that a long-term relationship could be tricky to navigate."

Potential match: "Leo is the opposing sign for Aquarius, and a Leo-Aquarius relationship could definitely work. But sometimes, an Aquarius could find Leo to be a bit too much. Leos can be egotistical. It's like there's something regal about them, and they carry themselves in that kind of a light. Aquarius can scoff at that and think that Leos are egotistical and superficial, whereas an Aquarius is looking for somebody who's more about humanity at large."

Gemini: "Gemini intellectualizes everything and there's a lot of talking without emotion, while the Pisces emotes things and has to have a more emotional bond. So they could find that a Gemini is disseminating information or emotion in an intellectual way, and that's just not sufficient for them."

Sagittarius: "A Sagittarius can be scary for a gentle Pisces. They're like, 'Let's do this, let's do that." They're a bit gung-ho. And a Pisces is a slippery fish that swims along, and they don't like that full-on, galloping-ahead approach."

Potential match: "The opposing sign for Pisces is Virgo. And if Pisces could cope with Virgo's need for order, that could actually help Pisces bring more structure to their lives. But equally, it could be that Virgo's too detail-orientated—Pisces don't favor logic that much but go more for intuition. They could find that a slightly off-putting."