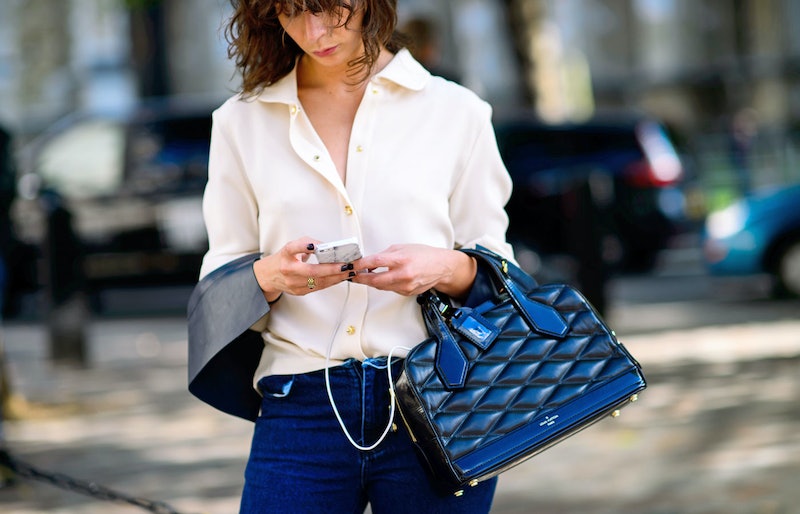 If you think the fast-paced and intimidating world of online dating apps has only impacted how millennials meet their mates, you're sorely mistaken. Singles over the age of 35 are turning to their phones for romantic opportunities as well. We sat down with Pamela Glassman, Rachel's sister and The Zoe Report's Director of Business Development, to find out what Tinder is like for someone who didn't grow up using emojis.

What Was The Appeal?

"I've tried blind dates and dating websites, but dating apps felt far more fun, almost like a game. Having been divorced for twelve years, I've put in more than my fair share of time on the circuit. So, I was attracted to the lighthearted approach of a dating app, and literally everyone seemed to be jumping on the bandwagon. (Maybe this is why every time you go into a bar everyone is looking at their phone?) I'd jokingly made website profiles with girlfriends over wine before, but on a trip to the Hamptons a friend actually showed me the app and I became addicted to swiping. On a more serious note, this is how dating happens these days. It's where everyone goes to meet new people, and I'd heard a few success stories so I thought I'd give it a try!"

What Were Your First Impressions?

"I actually set up my profile with the help of two guy friends, one in his late twenties, one in his forties. They were both incredibly opinionated when it came to my pictures, choosing the shots where I came across as confident and approachable, instead of the ones in which I thought I looked the most attractive. Lesson learned. I was adamant about being as genuine as possible, namely not hiding the fact that I have children and am divorced. If someone isn't interested in me for those reasons, we wouldn't be a good match. Finally, I found myself only using the app when I was with other people, thinking of it as more of a game than a viable dating option which was due in large part to the unsolicited dirty texts and pictures I often received after only 5 minutes of communicating with matches. It seems chivalry on dating apps is, for the most part, dead.

Going On An Actual Date

"Initially the app provided a confidence boost. I'd open it with friends, peruse the options and then we'd share the exhilarating experience of my matching with someone. I was doing just that at a group dinner when my girlfriend and I realized we'd both matched with all the same guys. Nothing makes you feel less special than knowing you're one of many. Our guy friend then dropped a bomb. Apparently most men just swipe right (which translates to "like" in non-Tinder speak) so they'll match with anyone who likes them, greatly increasing their odds of meeting someone. Both my ego and enthusiasm started to shrink as I realized there was nothing special about any of my prior connections. When I finally did weed through the crazies—or so I thought—I went on a horrendous first date. After an incredibly awkward hour we were saying goodbye at his car when he felt the need to explain the fact it was missing a window and bearing a multitude of dents. Apparently, his ex-wife had just discovered he was dating again, and the car took the brunt of her anger. Is it too late to swipe left?

"Is it too late to swipe left?"

After a few months I tried again, hitting it off with a talkative guy who seemed friendly and upstanding. We'd chatted over text for two weeks, and I was really excited to finally meet him. Sadly, the term "false advertising" didn't even begin to cover the disparity between what I was sold online and what I was met with in person. His profile picture had clearly been taken when he was ten years younger (and many pounds lighter), but his offline personality was also completely different than his personality on the app. Where we'd enjoyed banter before, there was now only silence. My questions were met with one-word answers, and his abundance of "haha" responses over text were nowhere to be seen. My already shaken faith was hanging by a thread. In a last-ditch attempt to give it a go I re-entered the fray. After cautiously swiping right on a few gentlemen, I matched with and began talking to a guy who shared a considerable number of my interests and life experiences. We had great chemistry and similar views on everything from music to religion to children, and he was eager to set up a date. Using the abundance of personal information he'd shared (everything short of his last name), I did a little sleuthing. Through a friend of a friend I found out he was in fact married with children and had a track record of cheating. I cut off all communication with him, and the app, right then and there.

Would You Try It Again?

"My experiences, while not great, were also not much worse than the average dating horror stories from the days before dating apps. These apps make it easier for people to misrepresent themselves, or be more forward than they would be in person, which does seem to increase the risk factor for disaster. For those in their twenties who've been put off of dating apps, I will say that I received fewer sexually aggressive advances from men in their forties than I did from those in their twenties and thirties, so it can get better in some ways; however, it seems the dating world in general is a tough place no matter your age or where you try to meet people. I wouldn't rule out the chance of my trying another dating app in the future, or even revisiting Tinder at some point, but I will say my biggest issue is the lack of genuine self-representation that goes on. I've always valued sincerity, but I think by your forties you should be comfortable enough in your skin to project a truthful image, whether on a dating app or otherwise. For now, I'm pursuing the tried-and-true method of meeting people through friends. I'd recommend the same for any woman like me unless, of course, she's interested in meeting unavailable (and sometimes, mute) men who are also swiping right on all of her friends.